“The Tribe has a large veterans’ base, which stems from a strong warrior tradition for Potawatomi and Nishnabe culture,” said Blake Norton, CHC curator.

“The memorial was created to celebrate and honor our Potawatomi veterans, thanking them for their service. Understanding the strong warrior traditions of Potawatomi and Native American communities, the displays have an intrinsic and visceral appeal. The memorial exhibits the dedication to your soil, to your people and the ability to defend what you feel is right, despite having faced so many atrocities,” he said.

Johnson joined the Army to serve in World War II and the Korean War. He was a Vieux descendant and second cousin to Jim Thorpe. His father, David Phillip Johnson, attended Carlisle Indian Industrial School with Thorpe and other Potawatomi. 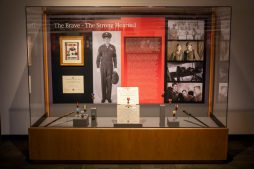 In 2005, CPN’s Tribal Heritage Productions interviewed Johnson about his service. During World War II, he served as a scout.

“Three or four of us survived from the whole platoon. They got totally wiped out,” Johnson said. “I didn’t think there was any Japanese around, but they waited until we all got up there. Then, they opened up on us three different directions.”

He suffered wounds during the Battle of Pork Chop Hill in the Korean War.

“It was a terrible defeat and gruesome battle over multiple months,” Norton said. “As they were trying to ascend the hill and gain control of it, Dick Johnson was hit in the back with mortar.”

He knew he was hurt and called out for medical help. When no assistance arrived, he used his first-aid kit to quickly bandage himself and move down the hill to the medic tent.

“Because of his wounds and dazed appearance, soldiers who had seen Dick coming down the hill later told him that they thought he was dead and that they were looking at a zombie.” Norton said. “He couldn’t talk, he had blood and dirt in his eyes, and he was severely injured.”

Sadly, 184 soldiers ascended the hill, but only 56 came back alive.

After the battle, he awoke at the hospital to a general officer pinning Purple Hearts on the soldiers. The exhibit features 10 medals including a Purple Heart and Bronze Star Medal. Because of his exploits in war, Johnson received the swagger stick displayed next to his awards.

The exhibit also includes photos, various documents and a memorial banner featuring Johnson and his brothers.

“People would have hung these in their window in the past,” Norton said, then pointed to the memorial banner. “It was pretty prevalent during World War I and World War II. It’s similar to the yellow ribbon decals people put on the back of their cars now to support the troops. The stars indicated how many from the family were serving..”

Johnson and three of his brothers served in the military. “It’s kind of like Saving Private Ryan with all four brothers fighting in the same war,” Norton added.

After the wars, Johnson continued to serve in a different capacity.

“Dick worked for an organization that was a precursor to the DOD’s Defense POW/MIA Accounting Agency that helped recover and bring home the remains of soldiers killed in action,” Norton said. “Today, the Agency recovers American soldiers deemed Missing in Action and Prisoners of War from past and present conflicts around the world.”

Johnson was born in Tecumseh, but like many other Potawatomi during the Great Depression, moved west to California in search of opportunity.

“Dick is remembered as the family historian. The collection he gifted to the CHC extends beyond his family, shedding light on the history and culture of the whole Tribe,” Norton said.

Johnson and his brother once looked to build a museum in California, but when the CHC opened its current location, he became interested in donating his collections to CPN. It took two trips to California to obtain the items. While visiting Oklahoma for family or CPN events, Johnson frequently brought more with him.

“Dick’s collection is so diverse. It’s more than the military objects in this display,” Norton said. “He actually curated the collection, keeping detailed records for many of the objects. It really helped us out when we started to curate and catalog the collection here at the CHC.

“We’re appreciative of Dick, his service and for being able to preserve all these pieces of history,” Norton said.

Johnson’s son Mark also carries on the Johnson and Potawatomi tradition of serving others in his role as legislator for CPN’s District 7. During a recent visit to the CHC, Mark saw the display and said he appreciates the CHC’s commitment to honoring veterans like his father.

“Service above self was something that I learned from (my dad) at a very young age — it shaped what I chose as a profession and made me the person I am today,” Mark Johnson said. “My father spent a good deal of his life working with children and working in Indian Education. He and I are very honored to be members of the Tribe. It only makes sense to me that the best way that I can honor his memory is to be involved in something that he cared so much about and that has been so good to us all. Much like him, I see it as a duty to serve and make a difference in any way I can.”

The Brave case installment, which recognizes and highlights CPN tribal member Dick Johnson’s dedication, leadership and service to the Tribe and the United States of America, is available to view until fall 2019. To learn more about CPN’s Veterans Organization, visit cpnveterans.net.