After competing against ten other contestants from across Oklahoma, Kay Manning of Oklahoma City took the top spot during this summer’s Ms. Senior Oklahoma Pageant at Oklahoma Christian University in Edmond, Oklahoma. 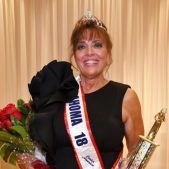 Kay Manning will compete in the Ms. Senior America contest as Oklahoma’s representative.

“She is a wonderful, talented lady, and we are proud of having her as our new queen to represent our great state of Oklahoma,” said Dove Morgan, one of Ms. Senior Oklahoma’s organizing directors. “We are very blessed to have a Citizen of Potawatomi Nation (member) represent senior women this year… It’s very honoring that she is Native American, as that is what our great state is all about.”

The win was a first in two regards for this year’s 11th Ms. Senior Oklahoma. Manning was the first CPN member to win the crown, and this year’s pageant was her first pageant of any kind.

Contestants in the pageant competed in four different categories, including talent, philosophy of life, an evening gown competition and an interview. Manning performed Hello Young Lovers from the musical, The King and I.

“I chose this because singing is something that I love to do and God gave me the talent. Plus singing is always a very effective way to reach out to people,” she said.

Manning is originally from Oklahoma City and attended St. Eugene’s and Bishop McGuinness schools before going to Marymount College in Salina, Kansas. She is a member of the Richstatter family.

She completed her teacher education degree closer to home at the University of Central Oklahoma in Edmond before embarking on a career as an educator. She has taught for 23 years and is currently a Pre-K teacher in Oklahoma City Public Schools.

Though some might have been nervous at the prospect of performing in front of an audience, Manning’s love of theater and song had her well-prepared. She told the Ada News that despite it being her first pageant, she had previously been one of the finalists for the 2004 “Gimme the Mike” competition on a local news station. Combining her love of performance and giving back to the community, Manning is looking forward to the opportunity that being named Ms. Senior Oklahoma will bring.

“Being crowned is an opportunity to positively impact the community in so many ways, and that was what really excited me,” Manning said. “I will be able to give my time and energy into doing some great new charitable causes.”

The Oklahoma City schools educator also had advice for those who may be interested in participating in the pageant despite being a novice.

“I would tell someone interested in doing the pageant to just get out there and do it because you only live once. Why pass up a great opportunity? The people involved in the pageant are some of the most fun and interesting I have met.”

Accompanying her on that journey was her pride and her citizenship with the CPN.

“I am very excited to represent the Tribe and bring awareness of our causes,” she said. “The more I can be a voice to our Tribe, the more people will understand all the blessings and traditions of being Native American.”

Keep up with Manning’s reign on the Ms. Senior Oklahoma Facebook page at cpn.news/ManningOK.