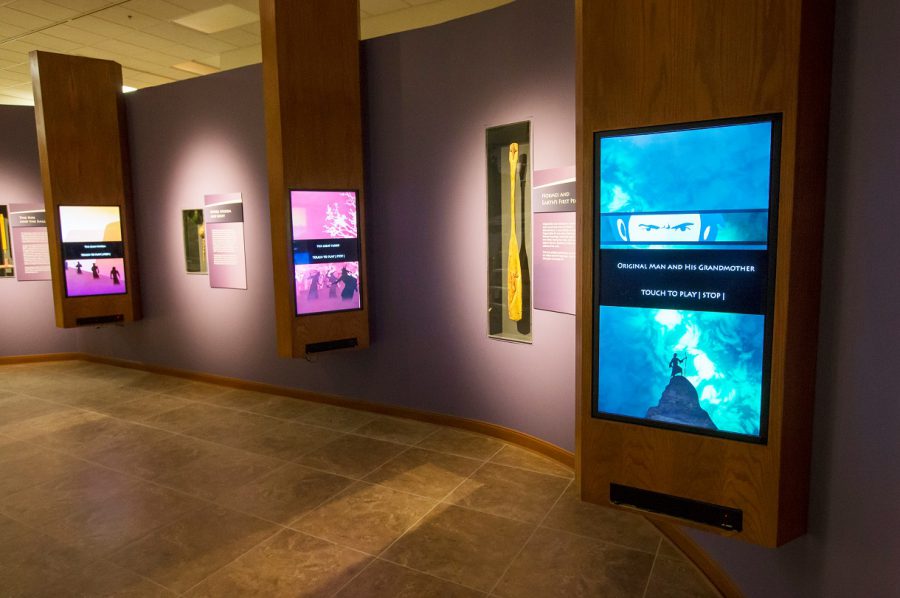 Section 2 at the Cultural Heritage Center.

For thousands of years, generations of Potawatomi preserved history and culture through spoken language and the art of oral traditions. Stories and interactive video in the second exhibit at the Citizen Potawatomi Nation Cultural Heritage Center highlight narratives that record Potawatomi beliefs, culture, history and early way of life.

“This is our Origins Gallery, because these stories tell the physical and cultural beginnings of Potawatomi and Neshnabek people,” said Blake Norton, CPN Cultural Heritage Center curator. “We have eight stories on display, but there are many more. The stories are traditionally told chronologically, so we chose the oldest stories. We were limited to eight due to space, visitor time spent at each display and an amount that would be easily comprehensible for visitors with varied knowledge and backgrounds.

“In Potawatomi and Neshnabek culture, these stories describe the Genesis of the world and people. The same is true of those with Judean and Christian backgrounds and the Old Testament,” he said.

The exhibit guides visitors through the creation story and oral traditions, explaining the world’s initial population, its destruction by the Creator in the great flood, the formation of land, the origination of sacred ceremony, medicines, the clan system for social structure and the significance of the eagle.

All Potawatomi and Neshnabek peoples come from Nishnabé, Original Man, and share similar oral traditions and parables. However, each group developed their unique versions over time.

“Communities interpret stories, based upon the mutual pasts of their people. Each Potawatomi nation knows and tells these ancient stories, but in their own unique way,” Norton explained. “We have done the same, but in small doses. We worked hard to stay true to the ancient tellings.”

The CHC begins with a wide focus, providing a view into what it is to be Nishnabe and Potawatomi into a narrower focus on what it means to be Citizen Potawatomi.

Oral traditions are at the heart of the Potawatomi. In fact, every winter, while seeking reprieve from the bitter cold, the people leaned on elders for traditional tales and lessons.

“To just sit and listen to your grandparents tell stories is pretty foreign these days,” he said. “That’s not just from a Native perspective — it’s everyone. With everything accessible online, who wants to just talk? Unfortunately, communication has become cold and distant with social media. This widens the generational gap even more between elders and their younger family members.”

Departments across CPN worked together to create the section’s eight video interactives, bringing this ancient pastime into the 21st century.

“Working on origins was one of the happiest projects of my life because it changed my life for the better,” said CPN AV Production Manager Shawn Barfield. “My favorite form of research is origin stories, so the whole project feels serendipitous to me.”

CPN contracted with Barfield to help create eight animated short films within section two. Shortly after, he became a full-time employee for the Tribe.

“It was challenging to decide the images for stories that have no visual references and are dating far back into the past,” Barfield said. “The biggest challenge for me was reducing the art to the most minimal state while still telling the story.”

“The Potawatomi flood story says that in the beginning, the various factions of mankind lived in harmony. In time, however, mankind descended into faction-to-faction confrontation or partisanship. Mankind descends into an irrational violent nature between factions,” he said. “This theme is consistent in many flood myths around the world. “

Creator (mamagosnan) flooded the earth after violence and turmoil reached excessive levels. The hero, Nanabozho, and certain animals, survived the flood by floating on a log.

“Mankind seems to struggle with fear and large scale violent expressions,” he said. “I think this is why flood stories stay relevant throughout human history.”

Before this project, many of these Potawatomi origin stories could only be accessed through elders, now all can hear and know these oral traditions, helping keep this important part of Potawatomi culture alive, he said.

Food that grows on water

In addition to oral traditions, section two provides a glimpse into traditional wild rice (mnomen) harvesting techniques, linking back to the museum’s first exhibit, the Seven Fires Prophecy. In the third fire, or third prophecy, the Potawatomi knew they reached the land promised to them when they found food growing on the water.

“The display exhibits cultural lifeways, but also the importance of wild rice as both food and medicine,” Norton said. “Mnomen is a healing food used in ceremony.”

Many Citizen Potawatomi do not recognize or have not seen wild rice due to forced removals and circumstances outside of their control.

To harvest mnomen, first, two people get into a canoe. One controls the push-pull (gadkigen), a long stick with a forked bottom, to guide the canoe boat through water and rice beds. The other uses the knockers (bwe’gen) to bring bundles of the tall wild rice into the canoe and taps off grains into the bottom of the boat. This provides mnomen, but also acts to recede the rice beds. Harvesting true wild rice through modern, mechanized techniques permanently damages rice beds.

The pillar of wild rice displayed in the second exhibit, gathered in the traditional manner from naturally maintained rice beds, represents the amount required to feed a family of four for a year.

“There is great care and precaution taken to not damage anything, to do things right,” Norton said.

Since European contact with Potawatomi, this system of thinking, or the idea of honorable harvest, has perplexed outsiders.

“Records indicate that many of the first non-Native settlers to the Great Lakes questioned why tribes who harvested wild rice were not more industrious,” Norton said. “Instead of five bushels, why not harvest twenty? More rice equals more money — That’s not the point.

“People harvested what they needed. Ricing Moon was not just for taking, but also giving back. The rice that didn’t make it into the boat fell into the water and reseeded beds for the next year,” he continued. “Medicines were placed in the water and ceremonies conducted before and during the Moon, thanking the Creator and asking for guidance. It was also a time to communicate, share and build relations with your kin and neighbors. .”

The second CHC section serves as a platform for visitors to hear narratives and interpret oral traditions for themselves as well as help preserve important cultural teachings and ways for generations to come.

“Our Origins Gallery is about truly connecting with those in the past and present,” Norton said. “Everyone is Nishnabé — everyone is Potawatomi — everyone is family.”