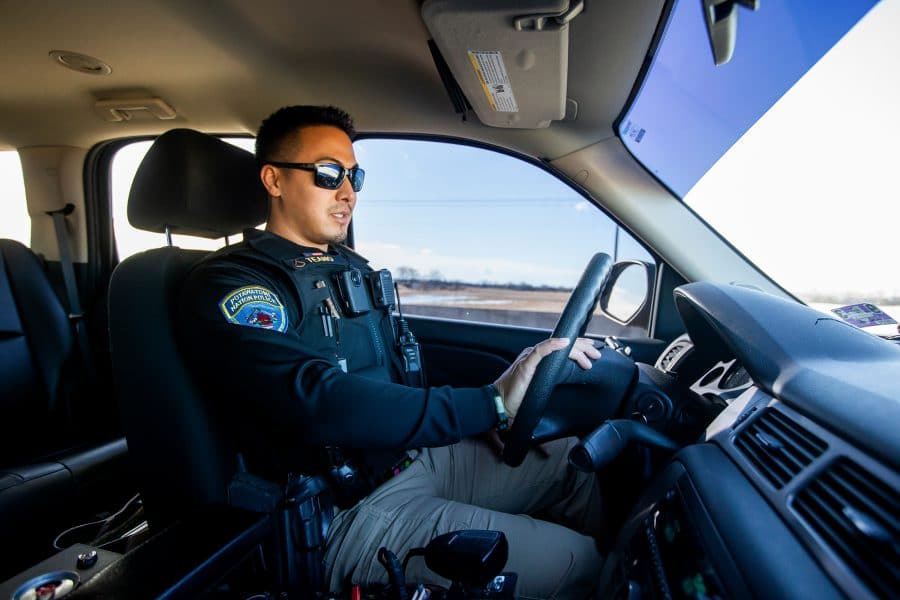 The Citizen Potawatomi Nation Police Department patrols nearly 900 square miles, which includes most of Pottawatomie County and portions of Oklahoma and Cleveland counties. The Nation’s emergency dispatch service also serves all of Pottawatomie County, excluding the City of Shawnee, and the cross deputation provides CPN police the jurisdiction to patrol countywide. But no matter where the CPN police patrol or who they encounter, the officers employ understanding and strive to keep everyone safe.

To learn more about the intricate and important role that the CPN Police Department plays, the Hownikan shadowed CPN Officer Vicente Teano during a recent shift.

“When I was a child, I always knew I was going to do something to help other people,” officer Teano said. Teano grew up on the Hawaiian island of Oahu, but today, he calls Oklahoma home along with his fiancé and two children. Before accepting his current role with CPN, he served as a security guard at the Grand Casino Hotel & Resort.

“I used it as a stepping stone to get into law enforcement, and it worked,” he explained.

Officer Teano has served as a CPN police officer for two and a half years, and he appreciates the opportunity to make a positive impact in the lives of others.

“It is not always a good feeling to arrest someone, but if it’s a big deal you’re arresting them for, like drugs or child abuse, you feel a sense of satisfaction knowing you saved that child or whoever from abuse or drugs,” he said.

With two children of his own, working child abuse or neglect cases are especially important and close to his heart.

“Getting them out of that environment is one of the best feelings, and eventually when or if Indian Child Welfare has jurisdiction to take over, and they begin working with the family; when you see pictures or you hear good things about the improvement of their living situation, you’re just happy,” he said.

Before each shift, Teano straps on his gear, which includes a sidearm and a bulletproof vest, adding an additional 22 pounds. In his free time, he trains in his equipment to ensure he’s conditioned for the extra weight. He believes being an officer means staying flexible and ready for any situation that may come his way.

“The saying in law enforcement is, ‘You have 90 percent down time and 10 percent of chaos,’” he explained.

“We constantly patrol our properties to make sure we have a high presence. So, if anybody is thinking about doing something, and they see one of our units, maybe they’ll change their minds,” Teano said.

The Nation provides 911 dispatching across Pottawatomi County free of charge, and Tribal officers are often the first ones on the scenes in the remote, less-populated areas. Because of this, shift assignments vary from patrolling the district around the Grand Casino Hotel & Resort, near CPN administrative offices, to southern portions of Pottawatomie County and more.

“The southern district is the busiest due to we get county calls and Tecumseh calls,” he explained. “I’ve been down to Wanette on a call, and it’s pretty far. It’s crazy because you have to drive so far, but especially if it’s an important call, it still can be a 15-20 minute drive.”

While on duty, he looks for opportunities to have positive interactions with those he encounters, whether in passing or during a traffic stop.

“It’s picking up a common ground with them and just talking,” Teano said. “And if they feel comfortable, more or less, people will talk to you.”

The Nation hosts large events throughout the year, including the Family Reunion Festival, the FireLake FireFlight Balloon Festival and entertainment events at the various Tribal enterprises. On days with higher traffic, the police department ensures officers are nearby the action to keep patrons, vendors and employees safe.

“We just don’t want anyone getting hurt at or leaving one of our events,” he said. “We work longer days. We can work anywhere from 16 to 18 hours.”

But even when enterprises are not hosting events, Tribal officers patrol CPN-owned businesses and buildings, ensuring the safety of both patrons and employees and preventing after hours break-ins.

The most common calls for both of the Nation’s casinos are public intoxications and theft.

“A lot of people forget their phone on a machine and someone takes it within a matter of seconds,” Teano said.

The CPN police department strives to act as a good neighbor to nearby municipalities. Many instances require Tribal police and city or county law enforcement to work together.

“As officers, we work well with other agencies,” Teano said. “I haven’t had any conflict with other officers.”

If another department initiates a traffic stop, and “they turn into any of our Tribal properties, whether it be admin or the grocery store, we just have to be present,” Teano explained. “We ask them what the initial (probable cause) was for the stop, then we’ll ask them if they want us to take over. And sometimes they say no.”

However, if the infraction occurred on Tribal property, CPN has sole jurisdiction. Unlike county, municipal or state law enforcement, the Nation’s officers learn Tribal law on top of their regular Council on Law Enforcement Education and Training.

“I went to Judge Lujan, and I spoke to him about (CPN laws), and they give us our Tribal books that we are required to study,” he said. “We have to study all the Tribal laws, then we take a test to basically graduate from the training process.”

After Teano first became an officer, he often worked midnight to 8 a.m. If other law enforcement departments were unable to attend to a call, he stepped up to the plate.

“If (other departments) were tied up, we have to cover calls from here (CPN administration) to Lincoln County,” he said.

Tribal police willingly assist when the need arises, and all CPN law enforcement take their roles seriously to protect and serve the Nation and the greater community.

“Helping someone is the best feeling,” Teano said.

To learn more about the CPN Police Department, visit cpn.news/police.