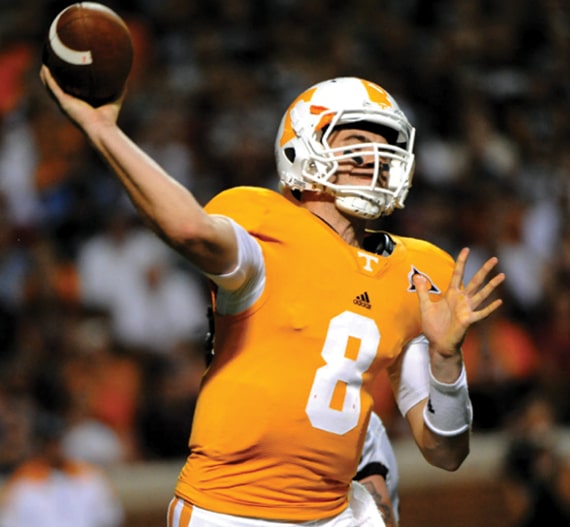 KNOXVILLE, Tennessee – The University ofTennessee’s 2011 football season began with the longest weather delay in school history. But lightning and high winds only delayed a first-half offensive deluge, spearheaded by the passing of sophomore quarterback Tyler Bray, a Citizen Potawatomi Nation member. The Vols rolled to a 42-16 victory over Montana in Neyland Stadium.

Bray finished the day 17-of-24 passing with 293 yards, three touchdowns, and no interceptions. 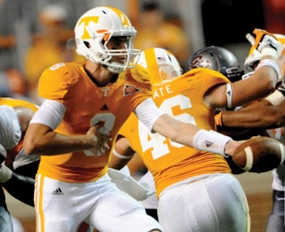 The Vols jumped out to a 14-point lead early in the first quarter thanks to two big plays from sophomore receivers Da’Rick Rogers and Justin Hunter. Rogers caught a 47-yard touchdown pass from QB Bray after the Vols recovered a fumbled punt following their first possession of the game. Montana’s next drive sputtered at the Tennessee 41, and three plays later Bray connected with Hunter for an 81-yard touchdown that gave UT a 14-0 lead with 8:36 left in the first quarter.

“The game went just like practice did,” said Hunter, who set a career high with 146 receiving yards. “We practiced like this all spring and all summer.”

After those two quick-strike scores, the Vols (1-0) were more methodical on their next two scoring drives. True-freshman tailback Marlin Lane ended a 12-play, 96-yard drive with a 9-yard touchdown reception to give the Vols a 21-0 lead, and senior Tauren Poole scored from 8 yards out to end a 13-play, 76-yard drive.

But the Vols’ productive first half wasn’t without a few sputters, and that didn’t include the 1-hour, 33-minute weather delay that began about 10 minutes before the scheduled kickoff. That weather delay, which caused the Vols to abandon their traditional entrance through the ‘T’ for just the second time since the 1965, wasn’t much of a factor, UT head coach Derek Dooley said. “It’s all how you manage it. It’s like old hat to me,” said Dooley, who has dealt with several weather delays as a head coach, including a 70-minute delay in a loss to Oregon last year. “Guys really managed it very well. They were relaxed. They shut it down in the locker room. We have experience at it.”

If the weather was bad luck, the Vols had a little more good fortune when it came to loose balls. Tennessee fumbled the ball six times — five in the first half — but didn’t lose any. It also had two interceptions overturned thanks to Montana penalties. There were a few miscues, including an 80-yard Montana touchdown in the second quarter on a busted coverage, and an 82-yard drive surrendered in the fourth quarter with mostly reserves on the field.

The Vols also struggled to get a ground game going for much of the first half, picking up just 67 yards on 27 carries in the first 30 minutes. It got better in the second half, especially for Poole, who finished with 98 yards on 24 carries. His 28-yard run in the fourth quarter also set up the Vols’ final points of the day, a 1-yard touchdown by Lane.

“Montana did a good job,” coach Dooley said. “They have all seniors and juniors on defense, and you can tell. They’re physical. (Poole) averaged four yards per carry. But we were hoping to run it a little better than we did.”

That’s a theme that carried over from last season. One that did not follow the Vols into 2011, at least so far, was a second-half letdown. The third quarter started with a safety on UT’s opening possession, but Art Evans returned his first career interception 37 yards for a touchdown to help stifle any potential Grizzlies comeback.

Tennessee returns to the field on Saturday against Cincinnati, which defeated Austin Peay 72-10. The game kicks off at 3:30 p.m. and will be televised on ESPN2.