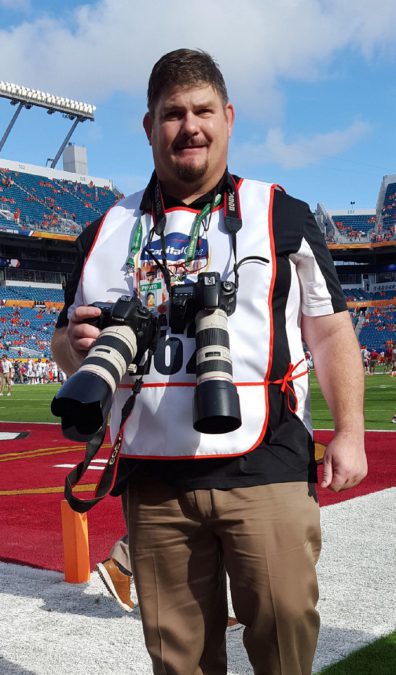 A Citizen Potawatomi was among those honored for his work in journalism at this year’s Oklahoma Press Association awards gala. Rodney Haltom is a sports editor for two publications based near his hometown of Eufaula, Oklahoma. When not writing poetry and songs, the Navarre family descendent writes, edits and photographs for Eufaula Indian Journal and McIntosh County Democrat and pens a personal column called “Haltom’s Huddle.”

He discussed his background and the work that led to his recent first-place OPA award for sports coverage in the category of weekly publications with a circulation between 900 and 1,399.

How did you get into the journalism business?

“I did a morning radio show and was the sports director for KFOX radio in Eufaula. I was the play-by-play broadcaster and called games for Checotah and Eufaula in addition to state playoff games for Hartshorne, Stigler and Checotah.

“The sports editor position was open at the Eufaula Indian Journal and McIntosh County Democrat and I applied and was offered the job in 2012.”

Slogging it out covering small town sports can be a challenge given the lack of resources, right? What’s your favorite sport to cover?

“I love covering small town athletics. Having grown up here in McIntosh County I already knew most of the student athletes and their parents.

Tell us a bit about the coverage that garnered your award for best sports coverage from OPA.

“The coverage that won first place for sports coverage in Division 6 was my spring sports in the McIntosh County Democrat. I take pride in my photographs, which played a factor in winning. It covered baseball, boys and girls golf, and softball and spring football camps in addition to my weekly fishing report.

“I had previously won first place for photography in 2014 for the McIntosh County Democrat. We have a great staff at both newspapers and it was noticeable at the banquet when the Eufaula Indian Journal won the Sequoyah Award, which is the highest honor the Oklahoma Press Association hands out. Both of our newspapers combined for six first-place plaques and numerous second- and third-place awards.

“I take pride in being Potawatomi and my work. We are a proud people and I want to continue to be successful not only for me but for those young tribal members that have dreams of being a writer or photographer. They can achieve their dreams and I’m a perfect example of that.”