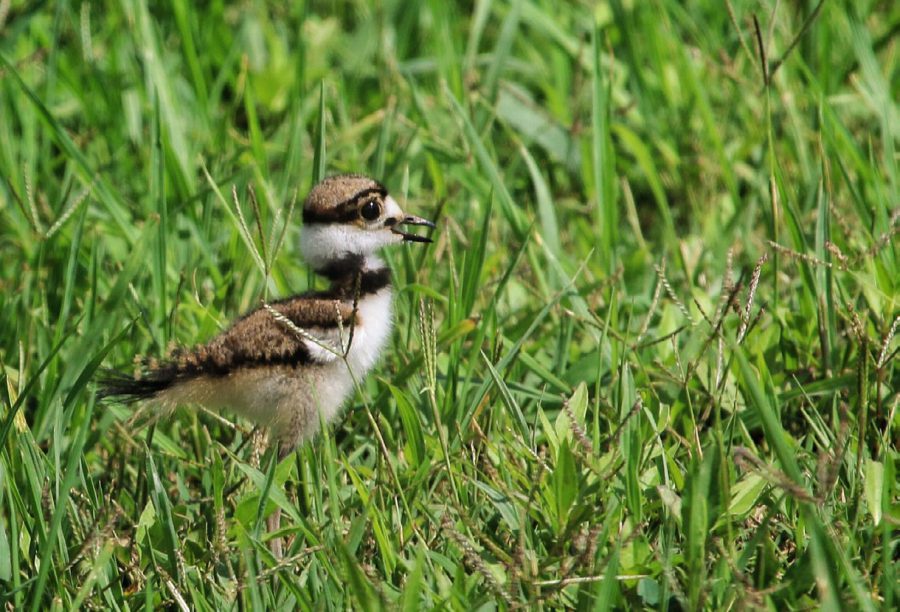 Eating bugs, now nearly a week old this young Killdeer is thriving and has come a long way from that nearly frozen hatchling.

Eating bugs, now nearly a week old this young Killdeer is thriving
and has come a long way from that nearly frozen hatchling.

By Jennifer Randell, Manager of the CPN Eagle Aviary

This time of year we get a lot of calls for injured and orphaned wildlife of all shapes and sizes.The largest volume of calls in the last week have been about Killdeers. Although a baby bird on the ground may seem like it needs our help, we have to know when to intervene.

Most people think baby birds are hatched blind, naked and completely dependent on their parents. That is true of most birds like robins, jays and sparrows. They are what we call altricial.

But there is a group of birds that are precocial, or “ripened beforehand.” These are birds like quail, ducks, and chickens. None of these babies lie around the nest and are waited on. They are born with their running legs to search for their own meal. They rely on their parents to show them how to forage and for protection.

Precocial birds stay in the egg twice as long as altricial birds, so they have more time to develop. A one-day-old killdeer chick is actually two weeks older than a one-day-old robin nestling. Although adult robins and adult killdeer are the same size, a killdeer’s egg is twice as big as a robin’s. There’s more nourishment built into the killdeer egg, to sustain the embryo for its longer time in the shell.

Killdeer’s nest on the ground, usually in gravel or short grass and nests don’t look like much. When you get near a nest or young the parents will often run away or put on an act like they have a broken wing to lead predators away from the nest.

So if you find a young killdeer, unless the parents have been killed or the chick is obviously injured, their best chance to survive and thrive is with the parents. Be sure there are not parents nearby before taking a nestling unless it is in immediate danger.

The killdeer pictured here was taken from a nest just after hatching. He rode around in an air-conditioned car for several hours before being delivered to the aviary, he was cold to the touch. Killdeer are extremely hard to hand raise because they need their parents to imprint on and learn from. We put him in a brood box to warm him. Then spent several hours driving around searching for a pair of Killdeers that had young close to this hatchlings age, hoping to introduce him if he survived the night.

Sunup the following morning we were encouraged by this chicks strong vocalizations. The first nest introduction seemed promising, but the other chicks were several days older and much more mobile and he couldn’t keep up because he was still learning how to use his new wobbly legs.

With luck though, the second location we found was almost an instant success. One parent immediately came to the chick when he called and within a few minutes the chick was up and running and had found a new family.

More photos can be found at our Facebook page, www.facebook.com/CPNeagleaviary.