Fun, fitness for the whole family

This year, Citizen Potawatomi Nation collaborated with the Shawnee, Oklahoma-based nonprofit Neighboring 101 to bring the “Getting Ahead” program curriculum to Native Americans in central Oklahoma. Based on Ruby Payne, Phillip DeVol and Terie Dreussi Smith’s book Bridges Out of Poverty: Strategies for Professionals and Communities, it outlines resources and guidelines to overcoming and circumventing an unsustainable lifestyle.

CPN Vice-Chairman Linda Capps and Neighboring 101 CEO Steve Palmer turned the idea of reaching out to Native communities into reality. The Tribe’s Workforce Development & Social Services department hosted the organization’s first all-Native American class since it began offering the program in the spring of 2014. 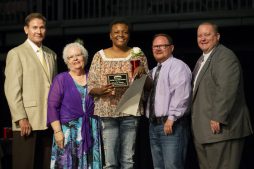 Neighboring 101 awards Kimberly Phillips (center) her graduation plaque as a member of its first “Getting Ahead” class with a 100 percent graduation rate.

“Change is very scary. And people get complacent where they are and kind of accept where they are as, ‘This is my lot in life.’ And it’s like, ‘No, no, no.’ It’s only limited by your own imagination,” Laudette said.

The sessions began with socialization and a family-style dinner prepared by the co-facilitators before heading into the week’s lesson. Those leading the class placed the chairs in a “U” shape to promote equality. The facilitators sat among the attendees and completed the modules with them. Each week they continued through the workbook and covered another topic. Over the course of the program, participants performed an honest evaluation of their lives that extended beyond finances.

“In doing an examination of that type, people get really frustrated, or they get scared, or their feelings get hurt or any myriad of human emotions,” he said. “We were all together able to persevere through all of that to keep everybody on track and growing in the right direction.”

The material covers systemic barriers and personal choices that contribute to poverty as well as environmental and political factors. Participants outline resources, and they create a plan to help them achieve their goals and increase their independence and livelihood.

“It’s a holistic approach. It’s not just financial, it’s spiritual. It’s your health. It’s your social life. It’s everything,” he said. “Who are your role models? Who do you look up to?”
One of the women in the class felt the spotlight often strayed from positive, Native role models in movies, TV, music and pop culture. Laudette encouraged her to search in other aspects of society to find someone Native American worthy of imitating and as a source of inspiration.

“There are plenty of role models for Native American children to look toward, whether they’re a tribal court judge, a legislator, a business owner,” Laudette said. “There is a multitude of resources where people can look to find a role model for their children and say, ‘Look. This is where they started. This is where they came from, with hard work, this is what they achieved.’”

Although the program is difficult, Laudette said its goal of “eradicating poverty through education, through collaboration” made him want to volunteer. Some of the highlighted topics included predatory lenders, budget planning using a proven formula and the importance of voting. Some of the students’ familiarity with available community resources made them better prepared than the facilitators to lead certain discussions.

“Everybody has their strengths, and whoever was strongest in a particular category would kind of lead for that bit of it. Then everybody would just kind of take back over,” Laudette said. “We even had some of the participants lead, and that was amazing, and they weren’t shy about it.”

All 11 participants attended the “Getting Ahead” graduation held at CPN’s FireLake Arena at the end of May. The nonprofit’s two other classes celebrated their graduates during the ceremony and reception as well.

“The energy of the crowd and the excitement, you could just feel the pride coming off the stage. And the way that the city itself turned out, business owners and stuff, to support and recognize these graduates was really overwhelming,” he said. “I had no idea that so many people would sponsor a table or just show up to applaud and cheer them on.”

That evening, Norma Neely won the Neighboring 101 Volunteer of the Year award, and shortly afterward, Tyler Laudette became a member of the organization’s board of directors
in June 2018.

“I just can’t stress enough how I think that every employee — everyone — needs to take this program. Everyone, and it’s free. Take it,” he said. “When you have an opportunity, get involved. Do it.”

Neighboring 101 conducts “Getting Ahead” classes when enough individuals commit to the curriculum. Those wishing to participate must first apply and then agree to an interview before the initial session. For more information, visit facebook.com/neighboring101 or email neighboring101@gmail.com.