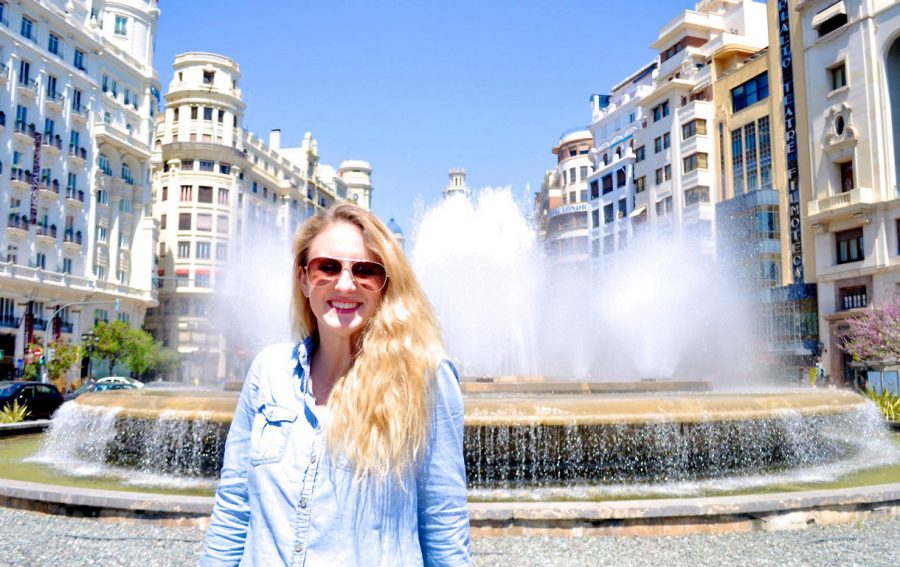 The Citizen Potawatomi Nation member received Tribal and academic scholarships while earning her Bachelor of Arts in Spanish and international affairs at Florida State University in Tallahassee.

Inspired by the support of the CPN scholarship, she connected with her heritage and Native American background. She became co-president of the American Indian Student Union on campus and helped promote Native American Heritage Month.

From there, her passion took flight. Soon, it also took her to another continent.

“I spoke to my grandfather more, and I began to put this awareness and research into practice at college,” she said. “I realized how much I enjoyed learning about cultures, planning events, organization and community service.”

“When they look at me, I can teach them there’s more than one look,” she said. “I can say, ‘Yes, here is the reality. Yes, here is the history. Yes, we’re still around.’”

After graduating in 2013, she worked in Yellowstone National Park for several months, saved her money and bought a camera. She connected with her loves of nature, wildlife and photography, “but I knew I wanted to live abroad longer than three months,” she admitted. “In the end, I was gone three years.”

From 2014 to 2016, she taught English to high schoolers in the village of Chinchón, located in La Comunidad de Madrid (the Community of Madrid), Spain.

“To be honest, knowledge of Native American culture abroad is very limited to what people see in movies, especially with teenagers,” she said. “Stereotypes are even further amplified abroad.

“I mainly tried to educate my students and my Spanish peers about the history of Native Americans in the U.S. and how they are treated today. It was eye-opening for many.”

From there, she started Universidad CEU San Pablo in Madrid, where she earned her master’s degree in international relations with the help of another Citizen Potawatomi Nation tribal scholarship.

“I love learning about new cultures, improving cross-cultural communication and understanding global politics and foreign policy. … I would not have been able to achieve the degree had I not had this (support),” she said. “The scholarship gave me stability while abroad, and for that I am thankful.”

The master’s program was bilingual, meaning half the classes were in Spanish and half in English.

“It was drastically different, (and) that’s where things really changed for me,” Morris added. “I felt more of a need to become involved. … I am interested in how countries interact with one another and how we can improve diplomacy around the world.”

In her free time, she hiked and traveled, capturing her experiences with her new camera. She also met local resident Guillermo Escudero. They developed a close friendship and were soon dating.

“Europeans are definitely varied and can be mixed cultures, just like in the USA, but by contrast I saw many Spanish families talk of a very Spanish, always from Spain background without much detail into roots,” she said. “At least in the case of my fiancé’s family, they were intrigued at how much of a mixture my American background really is, with a Native American component on my grandfather’s side.”

‘The time is always now’

After graduating in 2017, she returned to the United States and her hometown of Jacksonville, Florida, where she works as a study abroad adviser at Jacksonville University. The 27-year-old lives with her dog Buddy, shoots nature and wildlife photography for fun and nurtures her long-distance relationship with Escudero.

As a study abroad adviser, she fosters conversations with students on campus and discusses international education programs much like the one she experienced at FSU.

“If I could share one thing with Tribal members, especially young ones, is that if you have a dream or goal, the time is always now,” Morris said. “Sometimes people put off their dreams for a later date, and then they get pushed aside and lost. … No matter how long it takes to achieve the goal, go for it now. Start working now, and then you’ll be surprised where your work ethic takes you.”

During a late-December holiday visit to Valencia, Spain, Escudero proposed. She said yes. Considering the intercontinental logistics of their relationship, they have not yet set a wedding date, but Morris said things always have a way of working out.

She reminds herself of that fact, and her own advice to tribal youth, as she considers her future.

“I’m a person who can be anywhere, maybe even in a bigger U.S. city, maybe somewhere else entirely,” Morris said. “If I’m not in government work, then I’d be in a university setting, working with international students or a student-abroad program, or advocating for minority groups.

“I’ll be working to help other people — helping better other people’s lives, face-to-face,” she added. “I just really love talking to people.”