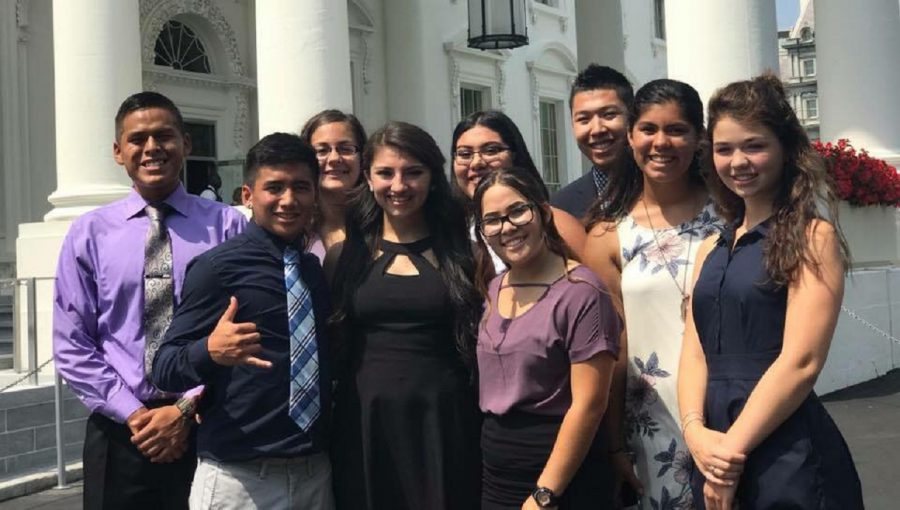 INSPIRE Pre-College Program is a part of the Native American Political Leadership Program held at George Washington University in Washington, D.C., and originated as a digital campaign to promote graduation among Native high schoolers.

Hundreds of students apply each year and approved enrollees are selected based on an essay, the student’s GPA and a letter of recommendation. Out of those hundreds, 10 were chosen including 15-year-old Citizen Potawatomi Annelise Rosas from Palm Springs, California.

“I decided to apply for this scholarship because I knew I was never going to be able to fully understand the background of my tribe and many other tribes if I didn’t take the opportunity to first understand the basics of all of it,” Rosas said.

According to course director Nicholas Courtney, in 2014, INSPIRE received funding from AT&T to expand and offer full scholarships to 10 Native American, Alaskan Native and Native Hawaiian students to study the intergovernmental relationship between tribal nations and U.S. federal system.

“I got involved because I was at a college fair that was provided by my school and I noticed that not many schools had a Native American program out in the open,” Rosas said. “GWU had a flyer out for this program, so I went home, did some research on it, and applied when the application was open.”

The students meet with members of congress, federal agency leadership and employees, and Native advocacy groups such as the National Congress of American Indians, National Indian Gaming Association and Office of Hawaiian Affairs. Students receive three semester credit hours for college during weeks that they are there.

Rosas said she was able to meet people from the Center for Native American Youth and discuss issues Native youth face on a daily basis.

“What I thought was most interesting was how involved CNAY already was with these issues,” Rosas said. “We are the future of our communities and government and it is important that we stay intact with these things so we can continue to spread our history and advocate for our tribes. … It is such an eye-opening experience to see the behind the scenes of laws, bills and decisions made in Indian country within tribal and federal governments.”

The full scholarship program includes room and board, course tuition, textbooks, local travel related to the course and a round-trip ticket. Students arrived in D.C. July 2 and returned home July 21.

“It might be the most nerve-wracking experience, but once you get to D.C. and start meeting and making connections with so many people, reality hits you and you realize just how lucky you are to be where you are,” Rosas said.

INSPIRE Pre-College Program application opens in December and closes in March. It is open to rising high school juniors, seniors and anticipated graduates.