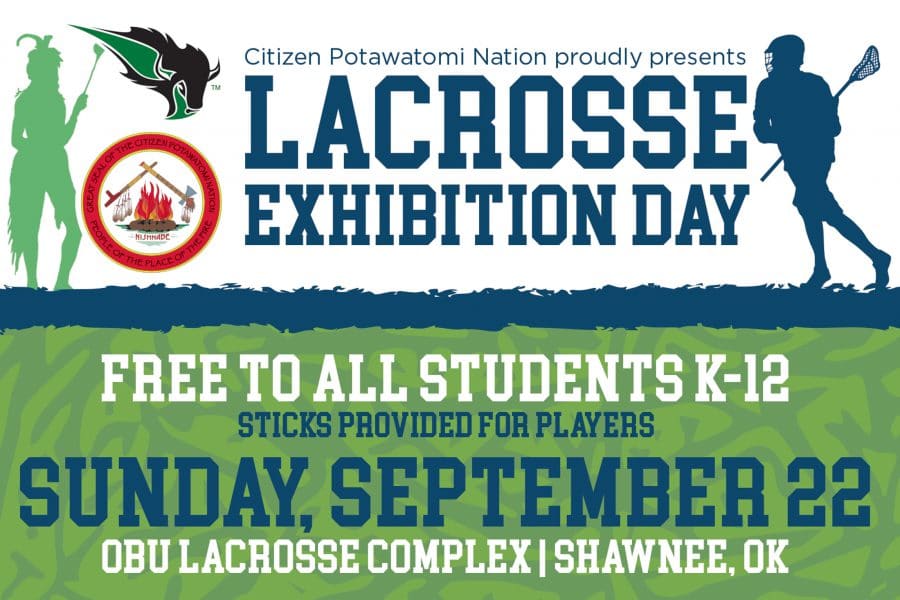 As the weather cools, Citizen Potawatomi Nation is set to host a lacrosse exhibition at Oklahoma Baptist University’s Lacrosse Complex. All local youth interested in taking up North America’s original sport are invited to attend the Lacrosse Exhibition Day on Sunday, Sept. 22. The event will include an instructional clinic and exhibition lacrosse game. CPN hopes to recruit players to restart it’s youth lacrosse program. The event is free and open to the public.

Although lacrosse has Native origins, the program is looking for players of all ages and genders, whether Native American or not. The game’s genesis began with tribal people stretching as far south as the Gulf of Mexico to Canada in the north, but it was most popular with those located east of the Mississippi River.

The Potawatomi played pegnegewen (stickball) on mile-long fields with games lasting a few hours to an entire day. A single 15-foot goal post with a line drawn halfway up stood at each end of the field. Players received one point for hitting the pole itself and two points if the ball struck a line painted on it. The Potawatomi players typically used a stick longer than 2 feet with a netted circle at the end. These were often made of steamed hickory shaped to hold the netting. Balls made from leather and hides were the focal points of the game, tossed from player to player at the goal posts to score. In some respects, Potawatomi pegnegewen resembled many of the techniques of modern day lacrosse.

The game spread throughout the northern and eastern states of the U.S. Different versions emerged in places like Indian Territory, where tribes from across the continent were forcibly removed. In Oklahoma, as mixed tribal people interacted, the games they brought from their varied ancestral homes began blending. Seminoles, Creeks and Choctaws from the Southeastern U.S. brought their two-stick version of the game to the areas where they lived, while the single-stick version of Sauk, Fox and Potawatomi were brought south from the Great Lakes.

The Sept. 22 exhibition is an attempt to restart a lacrosse program for youth in the Pottawatomie County area, regardless of whether the players are tribal members or not. Brad Peltier, a CPN tribal member, employee and lacrosse coach, is helping spearhead the event.

“I encourage all youth to give lacrosse a try, especially if they are still looking for a niche sport or have played more widely played sports like football or basketball,” Peltier said. “It is truly the most exciting game kids will play and parents will enjoy watching. The Tribe is here to support a program like we have in the past and help kids have fun learning the game.”

The clinic and exhibition takes place at the OBU Lacrosse Complex, located on Raley Drive Extended, north of the university’s main campus. Coaches, players and staff will give interested students in grades K-12 demonstrations and instructions on how to play. Sticks and equipment will be provided for those new to the game, and both boys and girls are encouraged to participate. Following the clinic, participants and spectators will watch two teams compete in a lacrosse exhibition game.