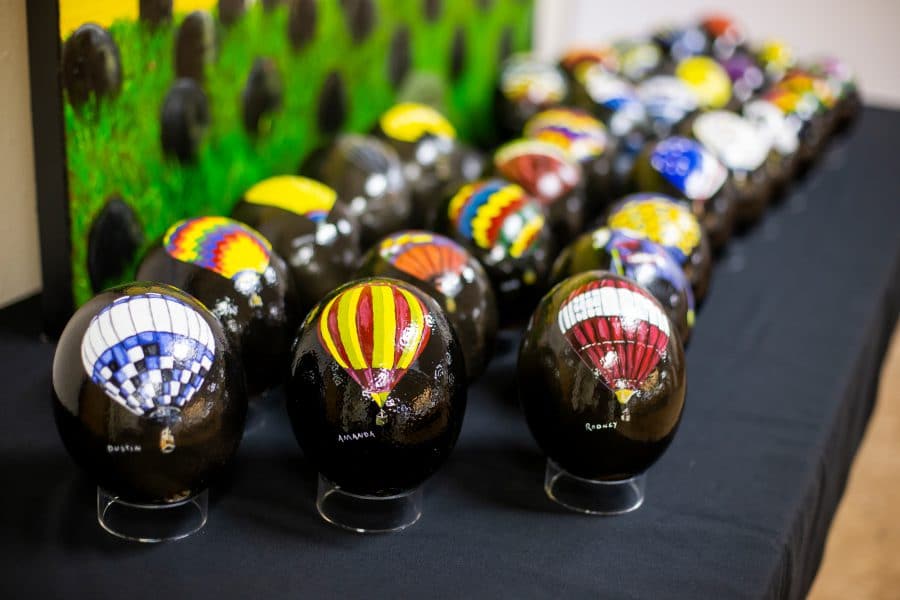 For its third year, organizers of FireLake Fireflight Balloon Festival decided to crack a few eggs when creating the gifts for the visiting balloon pilots. Citizen Potawatomi Nation artist Charles Clark — whose Potawatomi name is Kiktode — was tasked with painting each balloon on a new type of canvas than in previous years.

After months of trial and error, Clark settled on ostrich eggs sourced from a reputable online vendor as the setting for the gifts. In prior years, Clark has offered his artistic skills to the balloon festival, like in 2018 when he painted more than 30 different river rocks with individualized portraits of the FireLake Fireflight balloons.

“We’ve done river rocks in the past, but we wanted to try and go in a new direction,” Clark said. “The eggs we used were unfertilized, but the process for painting them was similar to last year with the rocks.”

To prepare the 29 pieces of art, Clark took extra care with each step including cleaning, priming, painting the balloon portrait, and sealing the egg. There are no specific tools made to hold ostrich eggs for painters like Clark. So, he created his own version that steadied each egg by balancing the ends via small holes in the bottom and top of the shell.

“He’s a Potawatomi artist, and this is a Citizen Potawatomi-sponsored event. The Tribe is very supportive of having its members and employees featured where they can, and given Chuck’s talent and ability to handle such a large project, it was an easy choice to work with him again,” said FireFlight Balloon Festival’s Kelley Francen.

This year, Clark painted 25 eggs. He estimated that, from start to finish, the process took five to six hours per egg. Each egg is approximately 6 inches long and almost 5 inches wide.

In addition to the eggs, Clark was inspired to add to his significant artistic output by painting his interpretation of the FireLake Fireflight Balloon Festival on canvas titled Discombobulated. Inspired by the 1930s science fiction magazine Amazing Stories, the painting shows the matte black eggs prior to their painting. The balloons capture the artist’s unique take on the FireLake complex near Citizen Potawatomi Nation’s headquarters.

“I’ve been inspired by those magazines for a while, but the festival and use of the eggs as a new medium reminded me of those pulp fiction classics,” Clark said. “I care more about the art, and this was a way for me to contribute that to the Tribe’s endeavor.”

In addition to being a Tribal member, Clark serves as the director of the tribal rolls department at Citizen Potawatomi Nation. As an artist, he produced more than 150 paintings to date that incorporate contemporary, dystopian imagery. To learn more Charles Clark’s art, please visit kiktode.com.