Where are they now? Potawatomi Leadership Program part of Zoë Gustason’s journey to self-love

Flame Brazilian Steakhouse Chef de Cuisine Nathan Hahn describes himself as a “meat and potatoes kind of person.” He has worked at Tribal establishments since graduating from Platt College with an Associate of Science in Culinary Arts in 2006.

“I’ve always kind of been drawn to making people happy with cooking. It’s one of the best feelings in the world for me,” he said.

Kid in the kitchen

Born in Newton, New Jersey — a small town of about 8,000 people — Hahn spent stints of his formative years in his home state, different parts of Texas and Oklahoma. His interest in food took shape at a young age.

“I remember instead of watching cartoons or things kids would watch, I would always watch cooking shows like The Frugal Gourmet,” he said. “It just kind of happened.”

His memories of the kitchen and family align. Hahn reminisced about one of his mom’s favorite dishes to make, and his love for comfort food and meat. 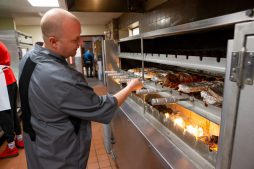 “You can’t go wrong with it,” he said. “When I was a kid, like mom’s pot roast, things she’d put in a crockpot all day. And just the smell, coming in from school — it would just be awesome. So I think foods like that kind of have a special place in my heart as far as cooking for other people.”

At 15 years old, he got his first job as a dishwasher at Rainbow Inn in Shawnee, Oklahoma, “a little mom and pop place,” Hahn said. His mom encouraged his employment, and Hahn believes it helped him develop a strong work ethic.

“I worked my way up to actually cooking food, and then I was just kind of hooked,” he said. “I went from there to several other places while I was a kid. One day, I finally decided to be a little more professional at it and attend culinary school.”

After graduating, Hahn worked at Embers, the Grand’s previous steakhouse, and spent his days broiling, searing and grilling.

“It’s kind of what I started doing, becoming a chef, was working at a steakhouse,” Hahn said. “I’ve always liked the style. … It is just something that I’m always drawn to.”

His tenacity, education and prior kitchen experience prepared him for his current position at Flame, tackling a fine dining kitchen’s day-to-day duties.

“It can be very demanding, stressful,” he said. “As far as being a chef or a manager, anything like that, you really have to love what you do.”

Brazilian steakhouses like Flame slowly blacken meat using a rotisserie over an open, lump charcoal fire known as a churrasqueira. Restaurants rarely use the technique, and Hahn’s knowledge from spending time at Ember’s Steakhouse made the transition to the new cuisine smooth.

“I really like the picanha. I think it’s one of the best things on the menu,” Hahn said. “That’s my favorite thing to cook and make. It’s a bottom sirloin. We cut it, and it’s actually balled up. … You get a nice slice of the crispy fat as well as the meat.”

Hahn described himself as a “firm believer” in the power of salt and pepper as seasonings. To achieve a Brazilian steakhouse’s signature rich taste, he uses smoked rock salt.

“Kind of what that does — besides impart a great flavor — it actually sears the meat, sears the juices in,” he said. “You’re really getting a great piece of meat.”

Hahn also takes pride in the hands-on approach to preparation. He begins each day butchering and cleaning the meat by hand, which he said is essential to achieving five-star quality. Customer feedback reflects the attention to these priorities, and he looks forward to leaving his own mark on the menu.

“We’ve had people come in from out of state who have eaten at other Brazilian places and say, ‘This has been the best,’” Hahn said.

And he wants things to stay that way.