With rise of high-profile awareness movements, time for change is now

CPN set to save lives in fight against opioid epidemic 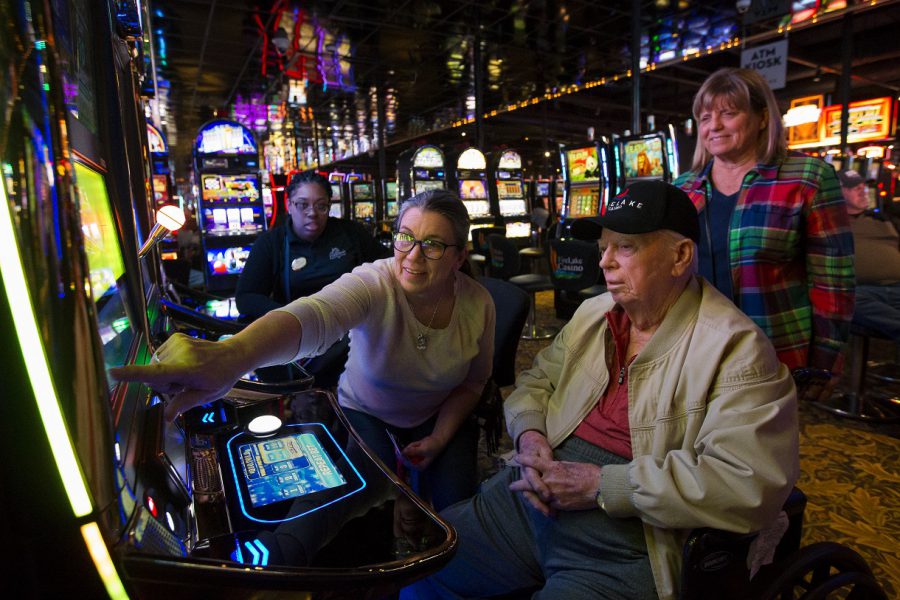 In January, Clayton Barnwell won an opportunity to spend the day at Citizen Potawatomi Nation’s FireLake Casino near Shawnee, Oklahoma, with his daughters Kathy Radiant and Vicki Eckerd.

Clayton Barnwell is 92 years old and resides at Villagio Senior Living in Oklahoma City, Oklahoma. One Friday in January, the veteran removed his treasured hat declaring him a combat medic in favor of a FireLake Casino baseball cap.

The center holds a drawing every month called Once Upon a Dream. The winner picks whatever they want to do for a day, and Villagio coordinates their wish. Barnwell picked a trip to Citizen Potawatomi Nation to enjoy an afternoon at the Tribe’s entertainment center.

Barnwell’s life is full and memorable.

The reason he chose FireLake Casino is simple: “I was born and raised here,” he said.

He feels a strong connection to Shawnee, Oklahoma near CPN where he graduated high school and later vacationed with his daughters throughout their childhoods.

Barnwell served his country as a combat medic in the 45th and 103rd Infantry Divisions during World War II. He remembers applying tourniquets to injured troops and the chaos of the Battle of the Bulge, according to a 2017 article from The Oklahoman.

Hunting and fishing were also a large part of Barnwell’s life well into his 80s. The Oklahoma Department of Wildlife Conservation began issuing Lifetime Hunting-Fishing Licenses in 1969.

Years after returning from the war and moving to Oklahoma City, he obtained license No. 76.

Barnwell also received his FireLake Casino player’s card in 2007. His daughter Vicki Eckerd said it is his favorite place to press his luck. He cannot recall any big wins on the slot machines, but he prefers them to card games and bingo. He generally bets on the higher denomination slots.

He traveled there from the retirement home using Debra’s Fun Time Tours with his girlfriend Ann Brewer before she passed away. They created special memories during the outings over the last few years.

“His girlfriend always said he was a winner,” Eckerd said.

A day at the casino

For Barnwell’s Once Upon a Dream experience, casino marketing manager Kevin Huffine and the rest of the staff welcomed him and his daughters.

The attendants at the players club all watched Barnwell open a gift bag filled with T-shirts, reusable tumblers, a tote bag, a fly swatter and more. He donned the baseball cap with the business’s logo immediately and kept it on for the rest of the visit.

Huffine said this was the first time the establishment participated in this type of program.

“This was his wish, and we wanted to make it a big day for him,” he said. “The whole staff was excited.”

Next, Barnwell and his daughters ate lunch at the buffet. He ordered a cheeseburger and a delicious piece of lemon cake.

FireLake also gifted him $150 in free play, which is how much he usually spends in a day there, and Barnwell lit up with excitement. After lunch, he and his daughters scouted the floor for a game.

They stopped several times and decided on the Wheel of Fortune slot machine.

“He watches Wheel of Fortune every night,” said his daughter Kathy Radiant.

She inserted her player’s card first and spun. Barnwell watched several unfruitful attempts. She slid her card out, trading it for his.

“Don’t dry mine out,” he joked as Radiant turned it again.

Villagio activities director Nikki Bowler smiled while watching Barnwell and his family. She called Once Upon a Dream a keystone
of the retirement community’s activities program. She has accompanied residents on adventures to the movies, Oklahoma Aquarium and Cattlemen’s Steakhouse since it began.

“Getting back out there and being a part of society again brings them back to life,” she said. “It’s just a good experience.”