In June, the Centers for Disease Control and Prevention released updated data suggesting that obesity rates — defined as having a bodyweight more than 20 percent above healthy levels for one’s age, gender and height — remain higher in rural counties than urban ones.

Based on CDC self-reported height and weight information, the national obesity rate among all adults living in rural areas is 34.2 percent, a jump of almost six percent compared to city dwellers older than age 18. That is an increase of almost five percent over the total national rate. In Oklahoma, the numbers are even higher according to the Oklahoma State Department of Health, with 30.8 percent of urban adults and 36.3 percent of rural adults classified as obese. Overall, 32.8 of adult Oklahomans are considered obese, including 40.6 percent of all Native American adults. 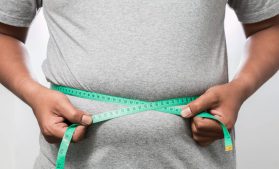 Corroborating the recent CDC numbers, American Indians and Alaska Natives are more likely to be obese — regardless of their zip code — than their non-Native neighbors as per the U.S. Department of Health and Human Services’ Office of Minority Health. An estimated 43 percent of all Native adults nationally and 15.9 percent of Native teenagers are considered to be obese, compared to 28.5 percent of white adults and 12.4 percent of white teenagers.

The causes run the gamut. Among the more common ones are lack of physical activity, poor diet, sleep deprivation, regular use of steroids or certain anti-depressants, and some metabolic disorders including Cushing’s Disease and hypothyroidism.

For Sunshine Costanzo, poor nutrition was the primary culprit. While struggling to pay off her student loans after graduating from the University of North Carolina at Pembroke in 2010, her weight ballooned to 260 pounds thanks to a steady diet of ramen and other low-cost, highly processed, shelf-stable foods.

Tired of being unable to find affordable, work-appropriate clothes that fit, Costanzo started taking small steps to get her weight in check and prevent the health problems that often accompany obesity.

A Zumba instructor friend let her work out a private payment plan for classes at a nearby studio. She started actively clipping coupons and checking grocery store sale flyers for deals on frozen vegetables, brown rice and lean protein sources. She quit drinking soda andsweet tea.

“That was the easiest change,” Costanzo said. “That was one of the easiest ways to maintain the changes I’ve made, and it’s the easiest thing I can fall back to if I feel like I’ve gotten off track.”

The increased cancer risk stems from the extra fat cells, which increase the amount of estrogen circulating throughout the body. Multiple studies have linked higher estrogen levels to higher rates of breast cancer in both pre- and postmenopausal women. Obesity is linked to hypertension and heart disease because of the extra strain placed on the heart to effectively do its job, which in turn raises the risk of a stroke.

However, with the American Heart Association recommending at least 75 minutes of vigorous exercise each week, active efforts are being made to lower the obesity rate, among both urban and rural Natives.

For example, the Citizen Potawatomi Nation’s FireLake Wellness Center near the tribal complex near Shawnee has opened its doors to area residents who are age 21 or older and are citizens of a federally recognized tribe.

The Oklahoma City Indian Clinic’s Health Promotion/Disease Prevention Department is a combination of dieticians, personal trainers and a medical assistant that team up to provide classes on range of topics, including nutrition, Zumba, circuit training and weight management.

To the east, the Indian Health Care Resource Center of Tulsa offers a free running and walking club that incorporates nutrition sessions. Participants can earn incentives, including paid race fees and free running shoes by attending a set number of practices per month.

Funded through grants from the Southern Plains Tribal Health Board and the Henry and Anne Zarrow Foundation, the program has grown to more than 100 participants ranging in age from elementary school students to retirees.

Meanwhile, for Costanzo, the weight loss has made it easier for her to dance in the powwow arenas. After dropping almost 40 pounds in 2017 alone, she is now physically and mentally comfortable enough to jingle dance during non-competitive numbers.

“Getting physically fit is not necessarily about being skinny. I am always going to be a curvier woman,” she said. “I will never be a size eight, and that is fine. It’s about connecting and feeling better. Fitness doesn’t look the same
for everyone.”