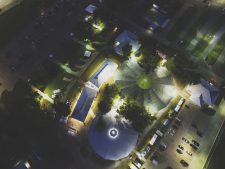 An aerial photo of powwow grounds during the 2015 Family Reunion Festival.

This month, Citizen Potawatomi Nation welcomes Potawatomi tribal members from across the United States to Tribal headquarters near Shawnee, Oklahoma, for the annual Family Reunion Festival.

The 2018 Honored Families are Anderson, Beaubien, Bertrand, Bourbonnais, Ogee, Pettifer, Toupin, Wano and Yott. Each year, CPN celebrates several founding families
by allowing them space to gather on Festival grounds, recognizing them during Grand Entry and honoringthem with dances during the Saturday evening powwow.

Honored Families will gather for an official photo on Saturday. During that time, members of each family are entered into a drawing for a sash and shawl to be worn later that evening during Grand Entry. One male and one female member will wear the gifted regalia and act as a guide for their family during the event. Saturday night is Grand Entry, where Citizen Potawatomi from across the nation enter the powwow arena together. Government leaders, including Tribal Chairman John “Rocky” Barrett, Vice-Chairman Linda Capps and Secretary-Treasurer D. Wayne Trousdale, enter behind the CPN Veterans Organization Color Guard. They are followed by this year’s Honored Families.

Regalia is an important part of one of Festival’s main events. Given the sacred nature of the powwow arena, it is vital that attendees wear appropriate dress. Men are expected to wear slacks and ribbon shirts. Women should wear dresses with shawls covering their shoulders. Shorts, spaghetti-strap tops and flip-flops are prohibited.

Tribal members will also have an opportunity to vote in CPN elections. This year, Tribal members in District 7 will choose between Legislator Mark Johnson and challenger Browning Neddeau to represent northern portions of California, Nevada and Utah. Tribal members from all districts can vote on the annual Tribal budget. Voting is in the Tribal courtroom at 1601 S. Gordon Cooper Drive in the CPN headquarters building from 7 a.m. to 2 p.m.