For Bertrand family descendant Bryan Burkhart, music has always held importance in his life. He currently plays drums in a band he started nine years ago called Groovement. Burkhart describes their sound as “funk and soul thrown in a rock band with a side of jazz.”

He began studying the piano under his mother at a young age and believes the lessons made transitioning to other instruments easier.

“Music has been engrained in me since birth,” he said during a phone interview with the Hownikan. “With the piano, it lays out the theory in front of you and also helps with coordinating your left and your right hand, which can lead you to other instruments. It’s a great instrument to start with.” 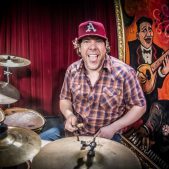 Burkhart spent most of his childhood in Texas and Oklahoma. After graduating from Jenks High School, he studied at the University of Arkansas in Fayetteville, and he continues to call the city home.

“Northwest Arkansas as a community is open and loyal to new music and live music,” he said. “Fayetteville creates a hotbed for musicians, and it’s a desirable place to come in, play and even live as musicians. I love it. It’s been a great nurturing place for myself and others.”

The Fayetteville music and art scene also inspired Burkhart to start his own band.

“I had an idea of what I wanted to do, and I found the guys that not only could do it but I also liked playing with what I felt were professional guys,” Burkhart said. “It’s morphed through the years for various reasons.”

Although Groovement’s lineup has evolved, the core goal of the group remains the same — make music that gets people moving.

“As a musician, you enjoy playing high instrumentation stuff, so that’s also kind of what we wanted to do,” Burkhart said. “I didn’t want to give up musicianship to try and crank out pop hits.”

Jam bands influence much of northwest Arkansas’ music culture, and Groovement is no exception.

“The jam band scene, it’s more of a community — a community that’s loyal and open,” he said. “I knew I wanted to be a part of that community, as far as musically, but at the same time, I wanted to be somewhat mainstream friendly, for a lack of a better word.”

“Every time we go out there, we’re trying to play the songs the best we can. You never know if a song is going to stay the same or if it’s going to grow,” Burkhart said. “We kind of leave it out of our control. If it happens, it happens. We don’t fight it, but we don’t force it either.”

Burkhart began experimenting with recording music several years ago when a local band approached him to help with their album.

“I actually recorded them in my spare bedroom in my old house,” he said. “I was already coming into the recording studio, but this was my first full-project and full album that I did everything for as far as engineering, mixing and mastering.”

Once completing the project, Burkhart wanted to expand.

“I looked into getting a bigger space with better equipment,” Burkhart said. So, he designed and built a studio in his backyard.

Groovement recently took time off from touring to record a new album or EP in Burkhart’s studio.

“I’m the engineer, producer, and I do all the steps of engineering, recording, editing, producing, mixing and mastering,” he said.

Burkhart looks forward to completing Groovement’s album so others can hear cuts from the band’s current lineup.

“It will be the first one that has all three of the new guys on it,” Burkhart said. “We probably have another two records worth of written ideas on the docket to iron out. The record is going to be what comes out of those songs and which ones become materialized.”

Groovement often performs at the legendary George’s Majestic Lounge in downtown Fayetteville, which began serving patrons more than 90 years ago. The band also plays at venues and music festivals across the world including the Caloundra Music Festival in Queensland, Australia.

Caloundra 2017 provided Groovement a great opportunity to reach new audiences, and Burkhart had no hesitations when festival organizers asked the band to return.

“They brought us over there with no way that the Australian continent even knew an ounce of us, but they did a good job promoting,” he said.

For their first show in Australia, a few hundred attended. The next day, they performed another set on a larger stage, and the crowd grew to 1,500.

“We have one more set thinking, ‘There’s no way that we think we can top the 1,500,’ but 3,000 people showed up to it. It was the most thrilling, unbelievable night.

“Being able to see that immediate growth in front of our eyes was amazing, and then after every single song, just the eruption from the crowd — the crowd was louder than we were playing,” Burkhart said. “I could feel it like a freight train of sound that I’ve never experienced before and have yet to experience since.”

The audience’s interaction gave Groovement hope and inspiration for the future.

“It gave us a little nugget of encouragement to keep believing and keep working at it, and good things will continue to come,” he added.

While the crowds impressed Burkhart and the band, he said his favorite moments happen when others sing along to their original music.

“The reason that it’s so fulfilling is people have gone out of their way to listen to your music,” he said. “It’s touched them in some way emotionally to where they want to listen to it beyond our one show that they may have seen.”

Although Groovement had a great time performing at this year’s Caloundra Music Festival, it was difficult for Burkhart to leave Arkansas. Just four days before the band flew out of the U.S., Burkhart’s wife gave birth to their daughter.

“She’s just a bundle of joy and the most precious thing to come into my life ever, so it’s a true blessing,” he said. “My wife is so dedicated — she’s really done a great job and shown a lot of love. My wife is very much appreciated, probably more so than she could ever imagine.”

When asked if his daughter will also take up music, he replied, “It’s a long way down the road, but we could definitely have some good times as far as exposing her to music. She will have the tools to be able to explore music. We have all the instruments that she can try out and space where she can go whenever she wants.

“I’m not necessarily pushing for her to do music; it’s hard, but if she does, I got her back,” he added. “I can help her along the way.”

As far as Burkhart’s musical goals, he hopes to one day perform at Red Rocks Amphitheatre, Austin City Limits Festival, Coachella Valley Music and Arts Festival and Madison Square Garden. Until then, he’s focused on being a husband, father and creating the highest quality, most rewarding music possible.