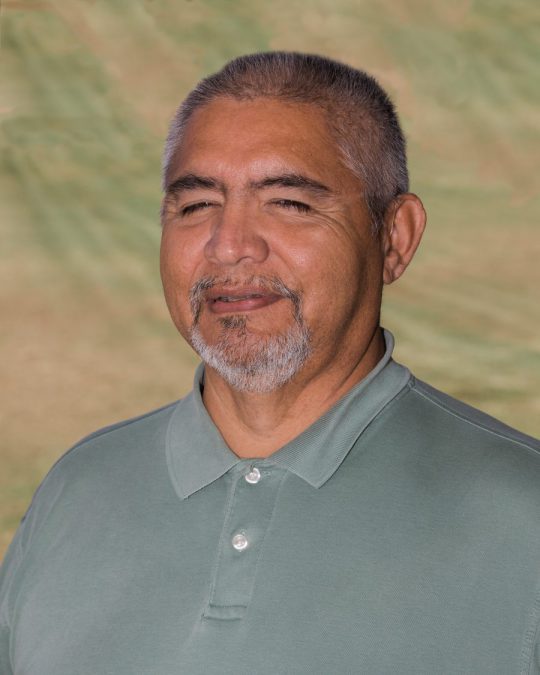 Cope is the pastor of the First Indian Baptist Church of Moore, Oklahoma, and is the Indian education director at Tecumseh Public Schools. His mother’s side of the family is Absentee Shawnee and Cope was raised as a member of the tribe, but its blood quantum rules meant his children would not be able to become members. Brother Cope renounced his Absentee Shawnee citizenship and enrolled as a member of the Citizen Potawatomi Nation as a descendant of the Peltier family. Following the divorce of his parents, he was largely raised by his paternal grandparents, who adhered to many traditional Absentee Shawnee ways. From that background Cope also emerged as a follower of the Christian faith, seeing little issue with the blending of more traditional Native American beliefs and practices with those associated with Christianity.

“By the time I was in the fifth grade I knew I was going to be a teacher and a preacher,” Cope said. After some formative years in San Diego, California, Cope returned to Shawnee, Oklahoma and was raised by his grandparents. He grew up in a home on their 50 acres of property, southwest of where South Rock Creek School stands today, just east of the city. There was no running water or electricity. His baths were taken in a large tub filled with water drawn from the well outside to cool the hot water boiled on the stove. His grandparents, while practicing Christians, also held closely traditional Native American beliefs and practices.

In a 2014 interview with the University of Oklahoma, Cope noted that stomp dances were a sacred form of worship for his grandmother. In her mind, it was a practice that wasn’t performed for others but rather a celebration between a dancer and their Creator.

A graduate of Oklahoma Baptist University, Cope is an ordained minister in the Southern Baptist Convention, but he pointed out that affiliation is somewhat loose considering the differences between more traditional congregations and that of Indian churches like his own.

“Our Indian congregations are really different,” he said. “Our Indian Baptist churches are roughly 20 years behind the regular Southern Baptist Convention (denomination). A lot of our churches, up until about 20 years ago, had many preachers conducting their services in their Indian languages.”

He recalled a recent funeral he performed north of the town of Seminole, Oklahoma, where all the songs of the service were in either Creek or Seminole. The service also kept with another facet of the Seminole-Creek denominations’ traditions in that the men and women sat separately.

In a time where many Native American languages are in danger of dying out in terms of the number of speakers, in many respects, churches are one of the few places that actively maintain Indian languages.

“You know for a lot of people, going into a classroom and learning a language, it isn’t their thing,” he said. “Singing a song is so much easier, you know, in terms of keeping the language alive.”

Cope noted that in Oklahoma, there are distinct differences between eastern and western sides of the state in terms of Indian Nations’ views on religion, including Christianity. On the eastern side of the state from Interstate 35 east to the Arkansas border there are tribes that came to Oklahoma from areas as diverse as Florida to the Great Lakes. Residents on the western portions of the state are more typically the Plains tribes. Cope pointed out that in that geographic and historical divide, in his experience, there are also differences between the views of mixing traditional tribal belief systems and Christianity.

“Our western tribes are far different,” Cope said. “Their traditions are intertwined and they have no problem with a person that follows their traditional ways and who also wants to come to church. That’s not a problem. The eastern tribes, they are very different.”

Cope noted that the eastern tribes, in contact with European and American missionaries prior to their western counterparts, made a distinct break between their Christian faith and what had been traditional tribal belief systems. When the first large-scale removals took place in the early 1800s against the Cherokee, Chickasaw, Muscogee Creek, Seminole and Choctaw, they brought with them long-established Christian belief systems.

Wheelock Church, built in 1846 to minister to Choctaws settled in Oklahoma after being forcibly removed by the federal government, is the oldest standing church building in the state. Located in far northeastern Oklahoma, Ottawa Indian Baptist Church is one of the state’s longest-running active congregations, and celebrated its 176th anniversary last year.

With such powerful issues at stake, Cope has seen firsthand how contentious the divide can be on religious beliefs. He recalled an instance early in his ministry when he was met with hostility, even the threat of violence, as he ministered at a local tribal housing addition.

He walked the complex as part of his role as preacher at Sallateeska Indian Mission, located north of Shawnee, and spoke to residents there. As he made his way back to his car, he encountered three men holding baseball bats and standing in his path. One asked if he was a preacher, and when Cope confirmed that he was, they asked whether he wanted a beating right then or later.

“I told them I’d rather not be beat at all,” he recalled. He then warned the trio that while they had him outnumbered, “I will run, but you better not catch me.”

Such instances have been outliers, Cope explained, because largely he is able to walk in two worlds.

In taking that approach, Cope believed while he wasn’t shutting the door on experiences and beliefs more closely tied to traditional Native American practices, he left it open to allowing people to explore melding them with the Christian faith.

When taking in the Potawatomi Creation Story or the Flood Story, the similarities of some of the origin stories to Christianity and Indian beliefs do resemble each other in some regards. Now in his fourth decade of preaching, Cope said his own views have changed somewhat to highlight those similarities.

“Each group of people on this planet has their own creation story, and they all think that they’re unique,” he said. “I used to get upset by that, believing that the Bible is the only thing that we can go by. But I’ve come to a place in my life that, these are just some of things that were taught by our great-grandparents, grandparents and parents, and those things are hard to tell someone ‘You’re wrong.’”

Cope said he tells people what he believes, what he’s learned throughout his life as a preacher and that if they want to listen, they can, but he respects them if they don’t. The more open-minded approach, as he termed it, evolved over the course of his time at the pulpit. He recalled instances where he’s seen congregants at his churches turn a cold shoulder to visitors who participate in traditional stomp dances and other ceremonies.

“I just can’t understand why some of our people will shut a door on an individual that was created by God, who God loves according to the scriptures that I believe; that we would turn our backs on them while they would welcome us into their confines,” he said.

The problem arises in many instances where Native Americans feel forced to choose between tribal traditions and those of Christianity, Cope said. It’s a conflict with historical precedence and hundreds of years of colonial and U.S. government policies centered on “kill the Indian, save the man.” Cope isn’t blind to the history either, making his faith in Christianity’s redeeming qualities all the more pronounced despite acknowledgement of the fact that the religion was forced onto Natives by the federal government. He said he believed that despite this, it was still the best way for a person to walk in the world.

Cope said that he also draws parallels from historical teachings in both Christianity and traditional Native American religious beliefs. He noted that the famous Shawnee leader Tecumseh’s teaching that people should acknowledge every man, which Cope sees as very similar of Jesus’ teachings to respect everyone. That universal tenet is what keeps him going, explaining the history behind his faith and practices while ministering to Native Americans willing to listen.

“As Indian Christians, we have been taught by our missionaries in the past that everything that is Indian is bad,” he said, “and that’s not true.”