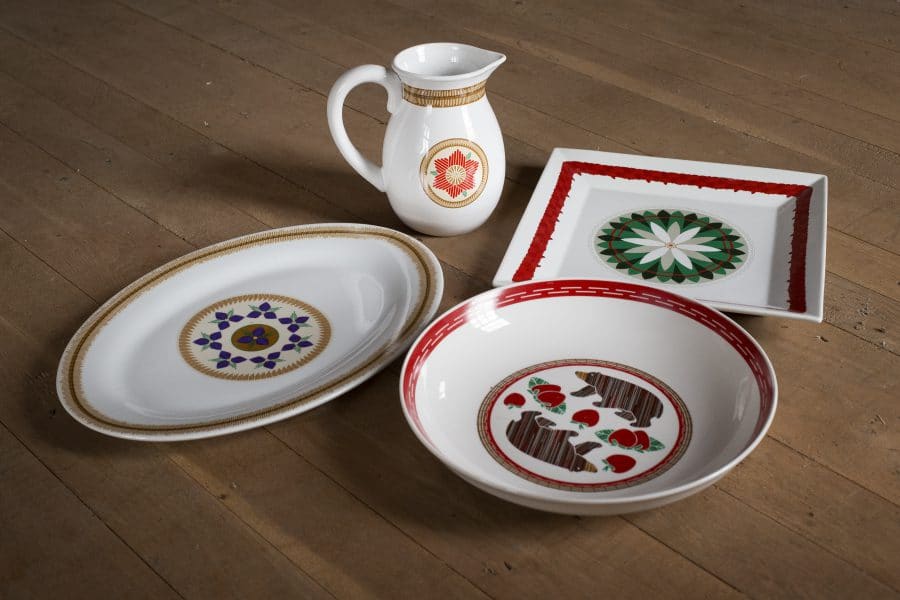 The Cultural Heritage Center’s vast basketry collection inspired the creation of a limited line of commemorative dinnerware pieces available for purchase through the CHC’s gift shop.

“Rather than highlighting one individual, we wanted to highlight the styles and techniques that are really quintessential to Potawatomi people,” said CHC Director Kelli Mosteller. “They represent not just Potawatomi culture but what I think is one of the highlights of our collection here at the Cultural Heritage Center in our basketry. Potawatomi are known for our basketry, whether it be black ash, the quill basketry or some of the more heavily sweetgrass baskets.”

Like many other aspects of Native American culture, Potawatomi woven art is slowly fading away. The U.S. Forest Service reports climate change and an invasive species of insect, the Emerald Ash Borer, threaten black ash trees’ long-term viability. The Potawatomi have used its bark as an artistic medium for hundreds of years.

“I tried my best to represent each of the baskets in the dinnerware without compromising the finished printed product,” Guleresian said.

The serving bowl from this collection features a bear and strawberries. The original basket was made for a spiritual leader on Walpole Island, Ontario, Canada. His wife, who wanted the design to represent her husband, and specifically the Bear Clan, includes the foods that bears eat. In the case of the basket, strawberries, blueberries and Coho salmon are all depicted.

“What she wanted was (his clan) to be represented on that but also to signify what bears eat,” said Blake Norton, Curator, CPN Cultural Heritage Center. “Unfortunately, while the basket was being made, he passed away.”

The wife stopped by the CHC while visiting relatives in the area. After seeing the museum, she offered the piece to CPN, he said.

“It’s really the key basket that we have in our relatively large basket collection,” he said. “It’s one of our landmark pieces.

“It speaks to not only the craftsmanship but the things that shaped our craftsmen now and in the past — the things that were around us — the flora and the fauna of the Great Lakes. It is kind of multi-teared in that it is representative of those things, but it’s also representative of what we’ve been very fortunate to slowly acquire here at the Heritage Center in our collection.”

The serving bowl also depicts strawberries, a fruit revered by the Potawatomi.

“It’s the perfect food,” Mosteller said. “It’s referred to as the heart berry because it not only is shaped like a heart, is the color of what we think of as the heart, but it also is a heart medicine.”

She stressed one must eat the entire strawberry, including the greens, to take full advantage of its health benefits.

“Those berries are things that grew wild in the forests of the Great Lakes. They were gifts. We can still honor and remember today to respect the berries, especially the strawberry, and the fact that it’s something passed down from generation to generation through our communities,” Mosteller said.

The pitcher features a red floral design inspired by another basket within the CHC’s collection. The original piece utilized wigwas (birchbark), wishkbemishkos (sweetgrass) and gawey (porcupine quills) in its construction.

“Across the top of the pitcher is a band that represents the quillwork,” Guleresian said. “It was challenging to try to translate the intricate pattern onto a 2-D medium.”

Another single-floral design served as the inspiration for the oval platter.

“To make it unique from the pitcher, I decided to create a repeating pattern with the purple flowers,” Guleserian said. “In order to make them look dimensional, the patterns on all of the baskets are made from small lines of color added together to create the larger shape.”

The black ash strawberry piece featured in the CHC’s third exhibit inspired the design for the square serving platter.

“This was the most difficult pattern to create because the basket is very three-dimensional,” Guleserian said.

Guleserian’s favorite is the pitcher or the bear bowl.

“I think both of those represent the original basket designs well,” Guleserian said. “The pink flower was the most fun to design and the bear one represents the quillwork the best.”

The commemorative basket dinnerware pieces are available to purchase individually or as a set for a limited time only. Check out the Citizen Potawatomi Gift Shop in person or online today, giftshop.potawatomi.org.