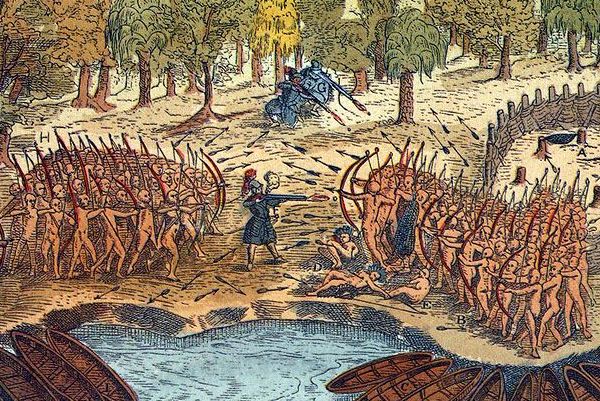 The Colonial and Intertribal War series brings brief introductions to the conflicts between the Potawatomi, Nishnabe, and other tribal and colonial powers spanning 200 years between 1628 and 1830. Throughout that time, the Potawatomi participated in nine major conflicts prior to the passage of the Indian Removal Act of 1830 and forced removal by the U.S. government along the Trail of Death.

The Beaver Wars began in 1628 and were the longest of those nine conflicts, lasting more than 70 years. More than 1,300 representatives from almost 40 Indigenous nations, including the Potawatomi, along with the governor of New France signed the Treaty of Montreal on Aug. 4, 1701, to establish peace.

The central conflicts of the Beaver Wars centered around land coverage and control. All parties involved wanted portions of the Great Lakes and Hudson River Valley for the ability to hunt and control the fur trade, particularly beaver fur. For most of the nearly three-quarters of a century worth of battles, Indigenous tribes sided with either the French or the Dutch and British.

In Indians in Pennsylvania (1961), Canadian historian Paul A. W. Wallace describes Europeans’ demand for fur, saying they would not trade agricultural goods for arms and other products tribes wanted — only fur pelts to sell overseas.

“The monstrous effects of the white man’s lust for peltries can hardly be exaggerated. … The Indian, in order to buy what he needed, had to devote his best energies to hunting. When his own territory was exhausted, he went farther afield, coming into conflict with hunters of other tribes, and there ensued the catastrophe of national wars,” Wallace wrote, saying it only affected Indigenous peoples’ lifestyle in a negative way.

The Iroquois Confederacy had a vested interest in maintaining their land in present-day upstate New York, and they quickly overhunted the beaver population as early as 1640 to fulfill treaty and trade obligations. The Iroquois then sought to expand their hunting ground to the north and west around the Great Lakes and into Canada as a means of economic, political and survival strategy.

Although largely an agrarian society, the Iroquois were also known as fierce warriors. They also began trading furs with the Dutch for guns and gunpowder in 1648. Other European colonizers avoided trading or supplying Indigenous populations with guns. As a result, the Iroquois, while small in number, used their firepower to stop and rob shipments of fur traveling along major rivers in the region to the French market in Canada.

The French monopolized the fur trade in the area, and the Potawatomi and other Algonquin nations held a fruitful relationship with them. The Iroquois tried to push their way into the trade route along the Hudson and St. Lawrence Rivers to serve as middlemen and retain a portion of the profits.

However, it became a delicate balancing act throughout the next 50 years, often with many bouts of violent conflict between various tribal and colonial powers. The 1650s to 1700 were fraught with kidnappings, decimation of villages and massacres as the Iroquois attempted to maintain trade relationships with both the French and English while gaining an upper hand.

The Iroquois pushed the Potawatomi to the western shores of Lake Michigan as they took over more of the region in the northwest, claiming present-day Pennsylvania, Ohio, the lower peninsula of Michigan, Indiana, Illinois and land further south by the end of the century. They dislocated many other tribes in the region as well.

The English and Iroquois had become allies as the English took over the former Dutch territory in upper New York in 1664. This led to an escalation of tension again between the French and their allies against the Iroquois. In the early 1680s, the French began selling firearms to allies, including Algonquin tribes, to match the Iroquois’ battle prowess.

At the end of the 1690s, the English ceased fighting with the French following several years of ineffective attacks and counterattacks alongside the Iroquois. French and allied forces had proved successful at making their way into Iroquois territory during that time, and both signed the Treaty of Ryswick in 1697. However, it still left the question of the Iroquois’ sovereignty, as both European nations claimed their territory as part of their land in North America. Battles continued.

At that same time, the French, Algonquin nations and Iroquois all saw the increasing strength of the forming English colonies — what would later become the United States. The Iroquois began to consider peace after continued attacks and the British’s failure to help protect their land.

Peace negotiations took place between 1698 and 1700. The Great Peace of Montreal was signed on Aug. 4, 1701, by New France and approximately 1,300 representatives of 39 Indigenous nations of North America, including the Iroquois.

It sought to end ethnic conflicts and put negotiation ahead of violence. It also outlined France’s role as an arbiter during conflict between tribes. The Iroquois also agreed to neutrality between the French and English colonies.

Onangises and Winemac represented the Potawatomi and some other Algonquin-speaking peoples at the Great Peace of Montreal. Onanguice signed the treaty with a Thunderbird, tree and roots, and bow and arrow for the Mississaugas, Potawatomi and Kouera Kouitanon, respectively.

The peace achieved by the consortium of nations lasted approximately two decades.

The North American beaver is known as a keystone species for their ability to adapt their environment to their needs and the subliminal effect on the surrounding ecology. Environmental journalist and author of Eager: The Surprising, Secret Life of Beavers and Why They Matter Ben Goldfarb spoke with National Geographic about his research.

“One of the things I love about them is that they’re so easy to empathize with. We humans love rearranging our surroundings to maximize our own human shelter and beavers do the exact same thing! They’re incredibly ingenious and enterprising,” Goldfarb said.

While building dams, they influence the paths of streams, creeks and rivers, often creating wetlands that provide ideal habitats for other plants, animals and insects while avoiding flooding in the greater area and increasing biodiversity.

Prior to colonization, the beaver population across Turtle Island was estimated between 100 and 200 million. During the Beaver Wars, hunters collected their pelts almost to the beaver’s extinction. They were sold as luxury goods, mostly as hats, to affluent customers across Europe. The price of fur fell throughout the 1600s, and while battles continued for land and power, the fur trade became less profitable.

While the beaver population was a mere 100,000 by the turn of the 20th century, it has increased throughout the last 100 years. Turtle Island is now home to approximately 15 million beavers — or about 10 percent of the total prior to the fur trade.