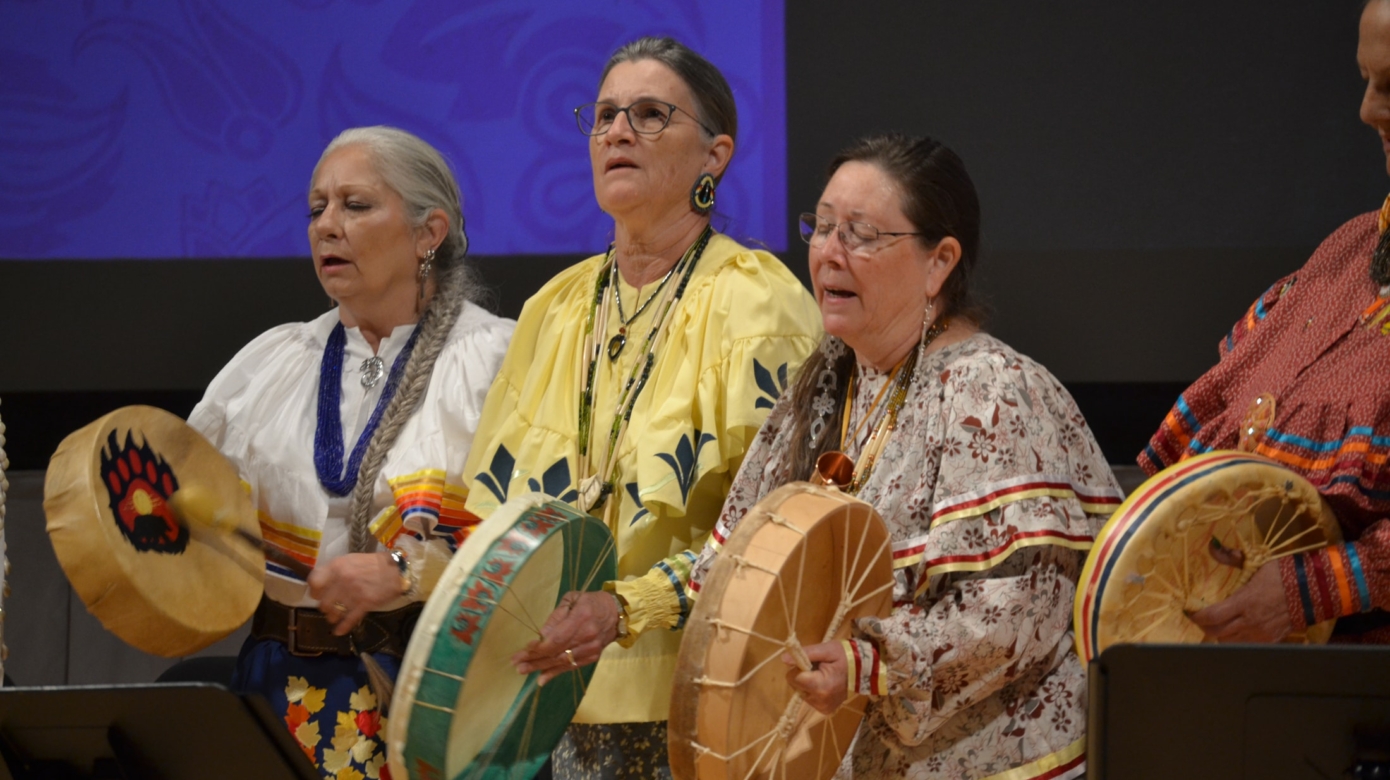 De’Wegen Kwek members, from left, Reva Wolf, Jayne Fleishfresser and Czarina Thompson sing and drum during the group’s performance at the University of Oklahoma.

The Ruggles Concert Series began in 2006 and is dedicated to Native American music and storytelling, said Dr. Christina Giacona, Indigenous and modern music specialist at the OU School of Music.

“Every semester we feature one group or artist or band or composer, and we build a show around their performance,” Giacona said.

One of Giacona’s colleagues at OU, Jennifer Slater, also teaches Native American music and had heard of De’Wegen Kwek.

Giacona was excited to feature a group comprised entirely of women, a first for the Ruggles series. The program has previously featured a wide variety of music, from Indigenous flutes to contemporary powwow singing and drumming.

“I was absolutely ecstatic,” she said. ‘This is perfect. This would be great for the students.’”

The shows are usually planned with OU’s music students and the community in mind, introducing them to music they may not otherwise have experienced.

“Mainly, we are hoping that community members will come to the show, but also a lot of students from campus. Many of the students who attend are taking Native American music that semester,” she said. “The (students’) goal is to listen to the concert, analyze the music, write a report over it, and then a lot of them actually get really interested in exploring more what’s happening in our state.”

Giacona said for some of her students, the experience has sparked a lifelong appreciation of various forms of Indigenous music.

“I have a lot of students who will, semesters later, email me and say, ‘Hey, I just heard this great powwow group, so thank you for introducing this to me.’ It’s a really great experience for our students,” she said.

Since 2019, the concerts have been free to attend with the hope that as many students and community members as possible are able to enjoy themselves and learn more about Indigenous music.

If people missed this performance, Giacona said they can attend an upcoming concert as the coordinators have plans to expand.

“I would love for (De’Wegen Kwek) to come again. We would love to incorporate a workshop maybe earlier in the day of a performance. And I want to find more opportunities that aren’t just the concert stage. My future goal is to have a concert at OU and then have a concert at (First Americans Museum) as well,” she said.

Dr. Giacona is also planning to produce video clips of the prior years’ performances for the Ruggles Native American Music Series website.

De’Wegen Kwek was established in December 2011 after group of women expressed interest in drumming after attending Potawatomi women’s teachings.