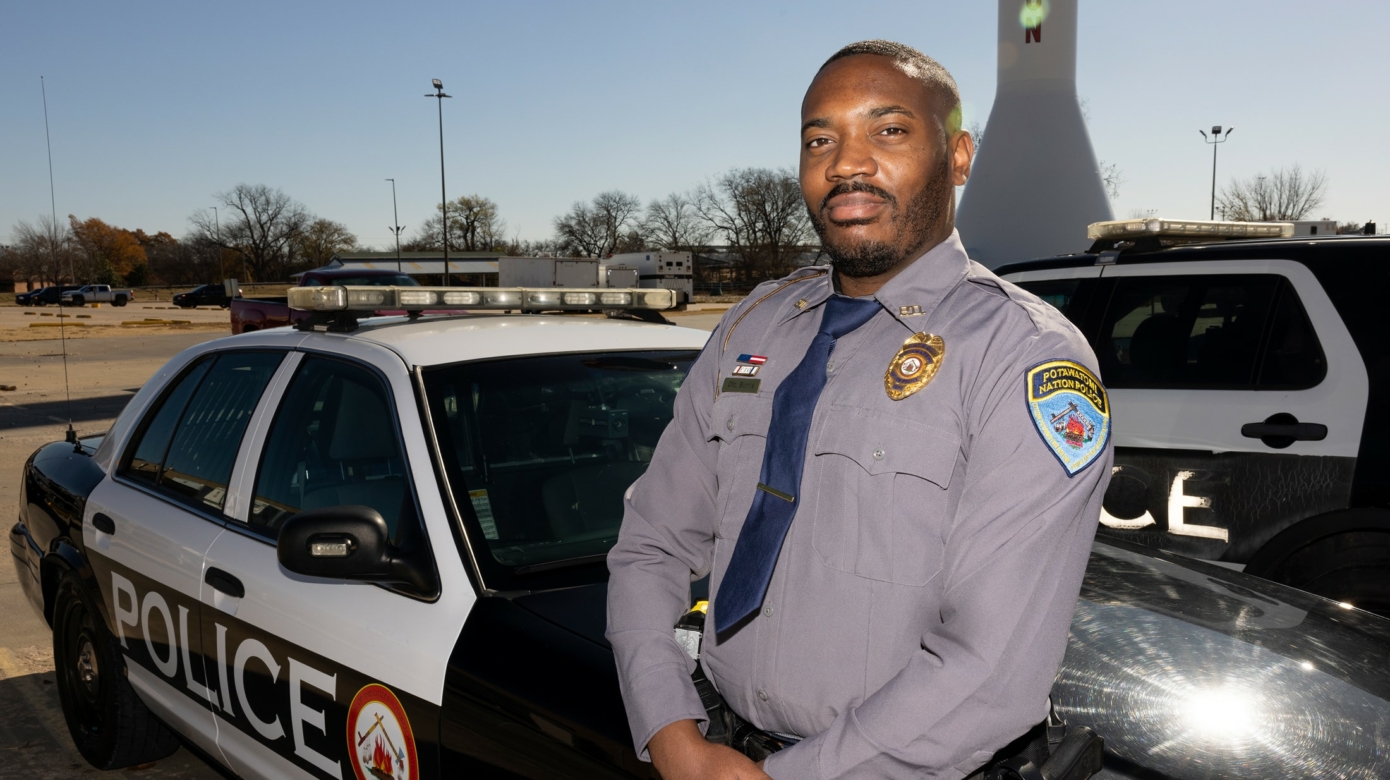 A desire to serve citizens and improve his community inspired Patrol Officer Marcus Burris to seek a career in law enforcement. He joined the Citizen Potawatomi Nation Police Department in 2020 with a mission to make a positive impact.

“I just want to make sure that everybody feels that they are important and whatever they’re doing is worthy of attention,” he said.

As a child, Burris wanted to be a construction worker. He only considered becoming a police officer after his family experienced some challenges.

“My family was struggling, needing help, but not feeling important enough to reach out for the help we needed definitely woke me up to that reality. It wasn’t just reality for us, but it was reality for a lot of people,” Burris said.

“I wanted to make our community better… (whether) they’re having an issue with something small or something serious.”

He began his law enforcement career in 2016 as a reserve police officer in the small community of Meeker, Oklahoma.

While many television programs show law enforcement in high-speed chases and tackling suspects, Burris said the most rewarding calls are the ones that involve interacting with the community.

An area man once reported his bicycle stolen and assumed he would not get it back, Burris said. The man, who is without a home, relies on the bicycle as his only form of transportation.

“I could tell as he was giving the report, he felt it was a lost cause,” Burris said. “He said, ‘I’m sorry, it’s probably not worth your time.’”

However, officers located the bicycle after a brief search and surprised the owner by returning it.

“It’s not the guns blazing, driving fast calls; it’s the ones where we’re showing (citizens) we’re going to do everything we can. Those are the calls that really make me happy,” Burris said.

He meets people from all walks of life while patrolling areas like CPN Housing, FireLake Entertainment Center, FireLake Discount Foods and the Grand Casino Hotel & Resort. Burris also embraces the opportunity to serve the wider community. He enjoys working with police officers from Shawnee, Tecumseh, McLoud and sheriff’s deputies from Pottawatomie County. It was one of the reasons he felt drawn to work for CPN.

“We do a lot of agency assists with our neighboring departments,” Burris said. “Having that relationship with the county is definitely beneficial for citizens because when they have these incidents that quickly get out of hand, we’re able to assist.”

In the late 1990s, tribal governments and Oklahoma municipalities began developing cross-deputization agreements. Those agreements built the framework that allow both tribal and state law enforcement to work together within each other’s jurisdictions. This effort fostered cooperation without infringing on tribal sovereignty.

That cooperative relationship was apparent when Burris responded to a recent domestic dispute at a family gathering. Dispatch informed him the situation was quickly deteriorating.

“It was in the northern part of the county, and (CPN officers) were the closest units,” he said. “The sheriff’s deputies are trying to get there, but they may be seven to 10 miles away. Being able to assist them and get to these high-risk calls, to handle the situation until they can arrive, it’s a big benefit to the community.”

Burris said communities in some corners of Pottawatomie County might only have a single deputy available to respond. Sometimes a Tribal police officer is closest and responds to the call or provides needed backup to another officer.

Burris also manages tough emotions while on duty. He said vehicle accidents involving a fatality are the hardest.

“We try not to bring that stress home, but that’s difficult, especially when it’s someone younger,” he said. “The best way to deal with it is not to think about it as much. As soon as I get off work, I dabble in hobbies, playing football and basketball with my son and trying to keep my mind off that event. I try to create that mental separation.”

Burris said he is generally laid back and tries to bring empathy and a calming approach to his job. He enjoys the chances to interact with the public he serves.

“I try to be as approachable as I can be; that’s both on and off duty,” he said. “I don’t want to come off as hard to talk to. You never know what day somebody is having, at the drive-thru or checkout, you can say the wrong thing. I try to carry myself as somebody that’s easy to talk to and a calming influence.”

With his focus on improving his community, Burris appreciates the opportunity to become a familiar face in the area. As his career progresses, he has ideas about how best to create and foster lasting relationships.

Burris enjoys events like Shop With a Cop. During the holidays, area law enforcement officers help children and youth shop and pick out gifts for themselves and their family members. He would love to participate in similar events year-round.

“I can see myself trying to push for more community events that involve other departments and agencies,” he said. “I’d like to come up with a baseball tournament or something like that through the year. I’d like to continue that interaction with community. I’ll be pushing for things like that in the future.”