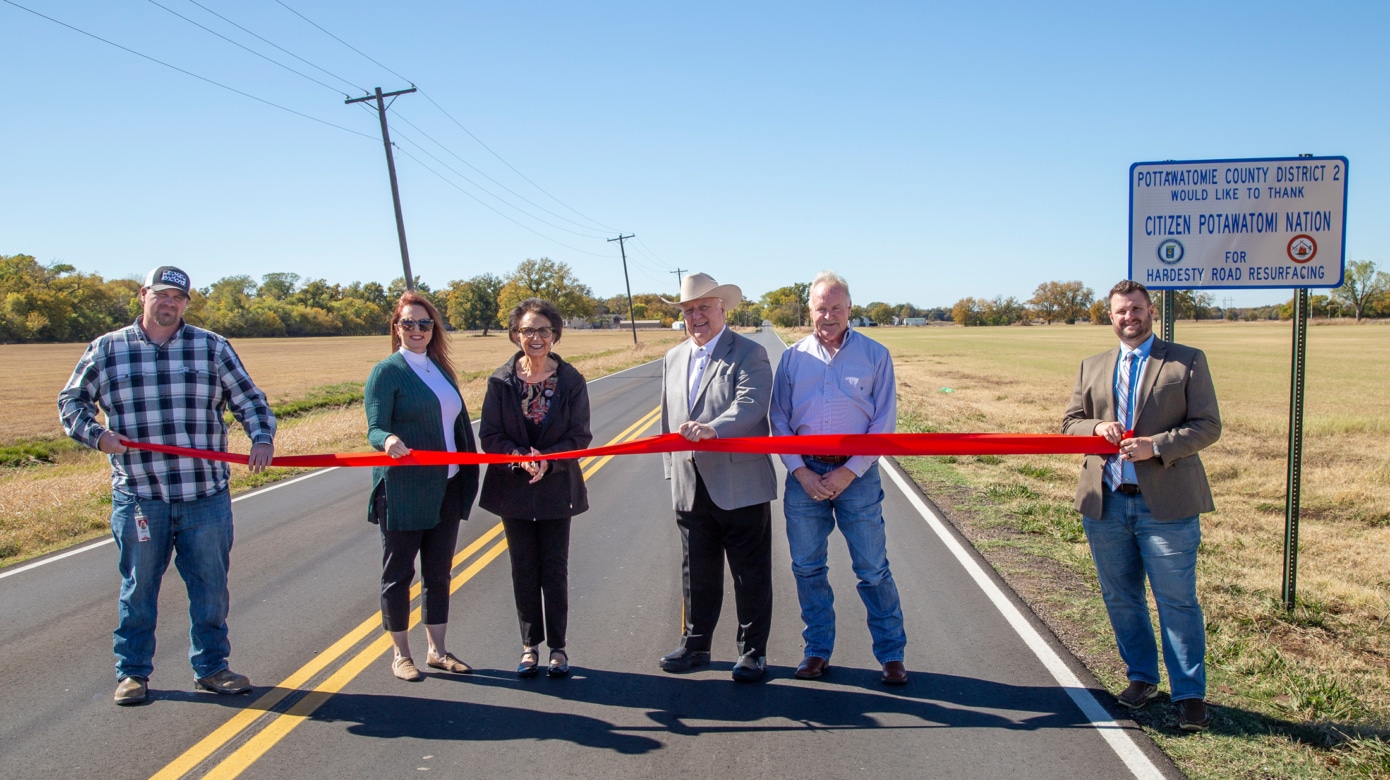 Leaders from the Citizen Potawatomi Nation joined Pottawatomie County officials to mark completion of the first phase of a road project near Shawnee, Oklahoma.

“We’re improving Hardesty Road from Highway 102 to Brangus Road,” Howard said. “The next phase will be the widening of Hardesty. The county is responsible from 13th Street to U.S. 177, and then the Tribe is picking it up from U.S. 177 to Brangus.”

The 6.1-mile portion from Highway 102 to 13th Street was completed at a cost of approximately $885,000, Howard said. The final price of the entire project is hard to estimate, due to the rising costs of labor and materials. But, once the engineer’s quote is received, CPN will have a better idea of the final total, she said.

Partnerships between CPN and city and county officials play a crucial role in improving county infrastructure. Federal funds designated for tribes to use in their jurisdictions fill an important gap in funding and benefit everyone from tribal citizens to non-Native residents.

Thomas said the partnership with CPN helps him quickly complete many District 2 roads projects that would otherwise take several years. Without the cooperation from CPN, roads projects are completed in multiple phases when funding is available — a much slower process.

“It’s a great blessing,” Thomas said. “I’m thankful to the Tribe, to Chairman (Barrett). I think it was a win-win.”

The Hardesty Road improvement project is just the first in a series of planned improvements.

“It’s a great partnership,” Howard said. “Through the Infrastructure Investment and Jobs Act, hundreds of millions of dollars have been set aside for tribes to repair or replace bridges through the bridge fund.”

She said her department has submitted applications for the replacement of eight county bridges.

“This is going to be an ongoing project. We’ll work together to identify these bridges,” she said. “When they’re designed, we’ll go into construction and replace them. So that’s another community partnership that we have.”

“People don’t realize the impact they could have as just friends and partners,” Thomas said. “(With) CPN paying for the (bridge) engineering fees, that’s $75,000 for each bridge. When we work together, we can get a lot of stuff done.”

The Tribe and county roads officials meet each month to discuss ongoing projects or to consider future projects.

“I also have standing monthly meetings with the city of Shawnee,” Howard said. “But if there’s something that needs to be done, we really don’t wait for the standing meetings or the project update meetings. If something needs to be done, we work together. They know that they can call me, and I can call them. It’s been a good working relationship with our community partners.”

Thomas said the relationship reminds him of friends and neighbors helping each other through challenges.

“Like a good friend. If I’m having a problem, my neighbor is going to be there. It’s a good thing,” he said.