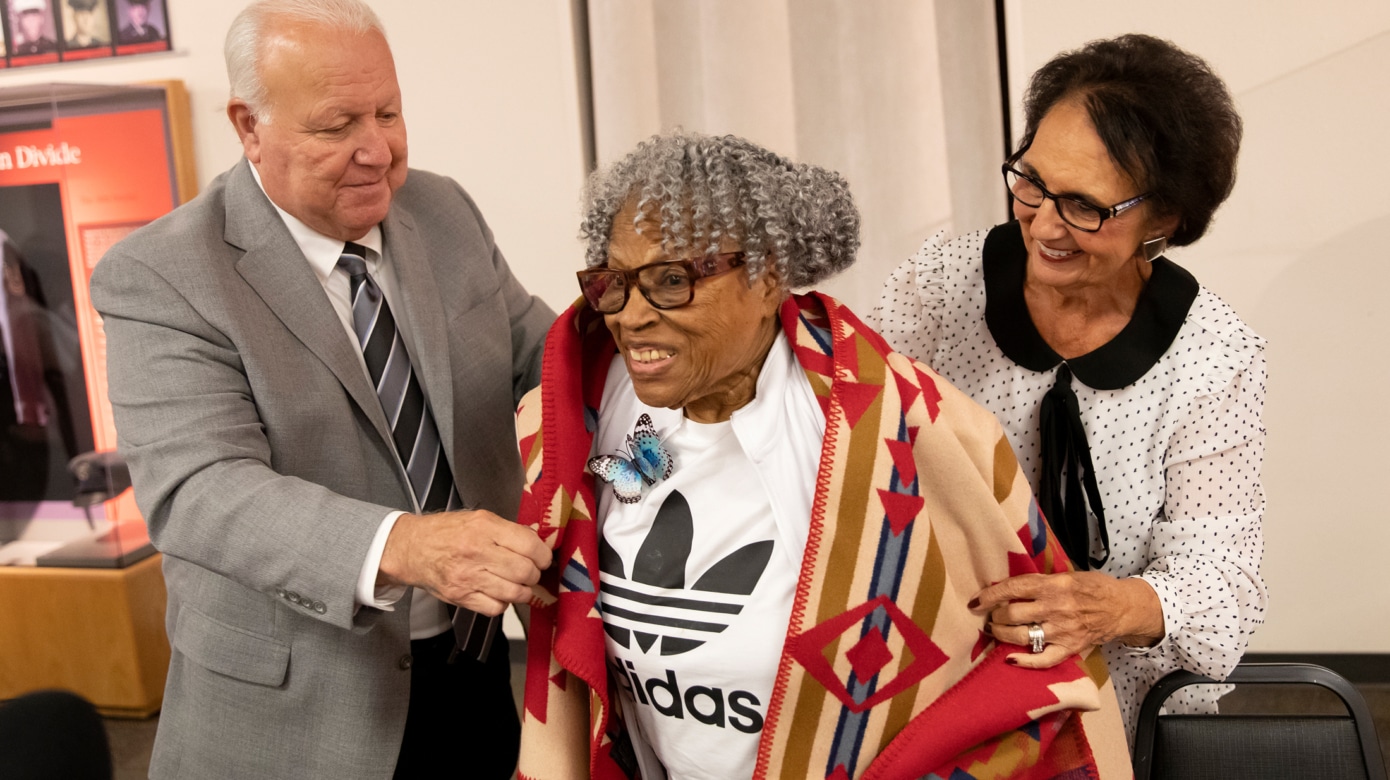 Chairman Barrett and Vice-Chairman Capps present Opal Lee with a blanket during her recent visit to Citizen Potawatomi Nation.

In 2016, at the age of 89, activist and retired teacher and counselor Opal Lee set out on a 1,400-mile journey from Fort Worth, Texas, to Washington, D.C. — on foot. The trek was an extension of her annual 2.5-mile walk raising awareness about the 2.5 years between President Abraham Lincoln’s Emancipation Proclamation in January 1863 and the eventual emancipation of nearly 350,000 slaves in Galveston, Texas, in 1865. She hoped the feat would gain federal recognition for Juneteenth — the holiday marking Black freedom in Texas and beyond — as a national holiday.

It took five more years and a second launch of Lee’s campaign in 2019, but on June 17, 2021, President Joe Biden signed a bill finally establishing Juneteenth as the country’s 11th federal holiday.

Though Lee sees this step as a crucial one, and a success worthy of celebration, a federal holiday has never been her ultimate goal. Instead, she sees the holiday as an opportunity for continued education, and at the age of 95, Lee continues to advocate for progress for all.

Her next project is a new National Juneteenth Museum on her land on the Southside of Fort Worth, Texas. Lee is adamant that the museum be a permanent and robust educational site as well as an economic driver in the area.

In preparation for the museum’s opening, and to tell the complete history of freedom in the United States, Lee is traveling the country to hear the story of Juneteenth told from every perspective.

The Citizen Potawatomi Nation and nearby Dunbar Heights Community Juneteenth celebration drew Lee’s attention, and she traveled to Shawnee, Oklahoma, in August to hold a roundtable discussion with members of the community about Juneteenth and its rich history in the state.

By way of introduction, Chairman Barrett gave a brief history of the Citizen Potawatomi and their relations to Black history in Kansas and Oklahoma.

“One of the reasons that we have been involved in a number of events in town that we hold across cultures and races in Shawnee is because of our history,” he said.

That history begins with the United States’ forced removal of the Citizen Potawatomi from the Great Lakes and, “in particular, with our relocation to a reservation on the Missouri line,” Chairman Barrett said.

“Before the Civil War started, there was a tremendous amount of fighting between those that believed Kansas should come into the Union on the side of the South and be pro-slavery, after the passage of the Kansas-Nebraska Act. And there were quite a number of activists in Missouri who did everything they could to try to stop Kansas from coming into the Union as a free state.”

There were also many who vehemently opposed slavery and sought to bring Kansas into the Union as a free state. Chairman Barrett explained the connection that the Citizen Potawatomi bear with those of pro-Union sentiment.

“We had a number of our Tribal members who were activists at the Free Constitutional Convention — there were two constitutional conventions held in Kansas, one slave and one free. And I think that our folks helped tip the balance over to where Kansas came into the country and the United States as a free state,” he said.

Tribal connection to conflicts over slavery via removal and land allotments continued when the Tribe was relocated to their present headquarters near what is now Shawnee, Oklahoma.

Indian Territory had been divided over slavery since the Trail of Tears, along which not only the Five Tribes but also their Black slaves were forced to march from the southeastern U.S. in the 1830s. As the Civil War ended and Reconstruction Treaties began, issues of tribal sovereignty, citizenship and land allotment became key players in the fates of the Oklahoma Freedmen — newly emancipated Black people among the Five Tribes.

But this emancipation did not come until 1866, a year after the celebrated emancipation of slaves held in Galveston and more than three years after the Emancipation Proclamation. Even following emancipation, inequity continued.

Marcus Clayton, a member of the Muscogee Creek Indian Freedmen Band, spoke about the ongoing pursuit of rights and freedoms he and many descendants of Oklahoma’s Freedmen face to this day.

The Curtis Act of 1898 directed the Dawes Commission to establish two separate rolls within each tribe for the purposes of land allotment; these rolls were determined by blood quantum and became a lever for further disenfranchisement and eventual disenrollment of Black members of the tribal community.

“Mixed-blood Black Indians were all enrolled as Freedmen with no Indian blood,” reports the Oklahoma Historical Society in The Encyclopedia of Oklahoma History and Culture. The Muscogee Creek Nation ratified a constitution in 1979 that defined tribal citizenship by blood, using the final rolls established by the Dawes Commission and effectively disenrolling Muscogee Creek Freedmen and their descendants.

“We’re trying to say, ‘Honor the treaty, honor the thing that you signed in 1866, so that we can get what is rightfully ours,’ because we, like African Americans, built a lot of things within the Creek Nation and some of these Indian Nations,” Clayton said. “We were part of the tribal councils, we sat on senate seats. … And then all of a sudden, those things got stripped away from us. And so right now, we’re still fighting to do those things.”

The Citizen Potawatomi Nation, though arriving in Indian Territory after the close of the Civil War and not among those tribes who owned slaves or negotiated emancipation of those slaves through the Treaties of 1866, is nevertheless bound up with the past, present and future of this pursuit.

In addition to emancipation and incorporation of Freedmen, the Treaties of 1866 stipulated significant land concessions for each tribe. This opened areas for settlement by non-Natives, as well as areas to which the federal government would relocate even more Native tribes. The Citizen Potawatomi were moved to land ceded by the Seminole and Creek Nations.

The Tribe was “a test case for allotment and citizenship,” writes Dr. Kelli Mosteller in her 2013 study, Place, Politics, and Property: Negotiating Allotment and Citizenship for the Citizen Potawatomi, 1861 – 1891. The same policies and treaties shaping the federal government’s relationship to the Citizen Potawatomi, and Native Nations more broadly, between the 1860s and 1890s shaped the Freedmen’s status and fortune as well.

“So, our interest and our involvement, especially in Opal Lee’s work on Juneteenth, is of extremely high interest culturally and historically and emotionally for the Potawatomi people,” Chairman Barrett said.

Lee views Juneteenth becoming a federal holiday as a springboard for further education and action.

When asked, “Why Juneteenth?” she replied, “The actual 19th of June didn’t free all the slaves. In fact, in Oklahoma, those over here with Indians didn’t get freed for another year until the treaties were made (in 1866). And the border state people still had slaves until the 13th Amendment (in December 1865).”

Lee continued, “Christmas is on the 25th. But are we sure that was the day he was born? The point is, we got to celebrate. So, the 19th was chosen.”

Sims added, “(The holiday has) allowed the nation a chance to heal. To recognize, to open the door. Twelve-step programs start with acknowledging that there’s a problem. And now you’ve got acknowledgement that we’ve been freed, but freed from what? So now you have a springboard and a way to have a conversation.”

She told the audience, “Thank you for inviting us, because we want to hear the stories of 1866 and understand not just the impetus for (those treaties that freed the slaves of Indian Territory) but what happened afterwards, so we can tell a fuller view in the National Juneteenth Museum.”

The National Juneteenth Museum will open on June 19, 2025, as a museum, an educational site and an incubator for economic development.

“I think those of you that are here need to make another effort to get your young people to understand what freedom means. And I’m not talking about Texas freedom, or Black freedom, but freedom for everybody. And we’re not free yet,” she said.