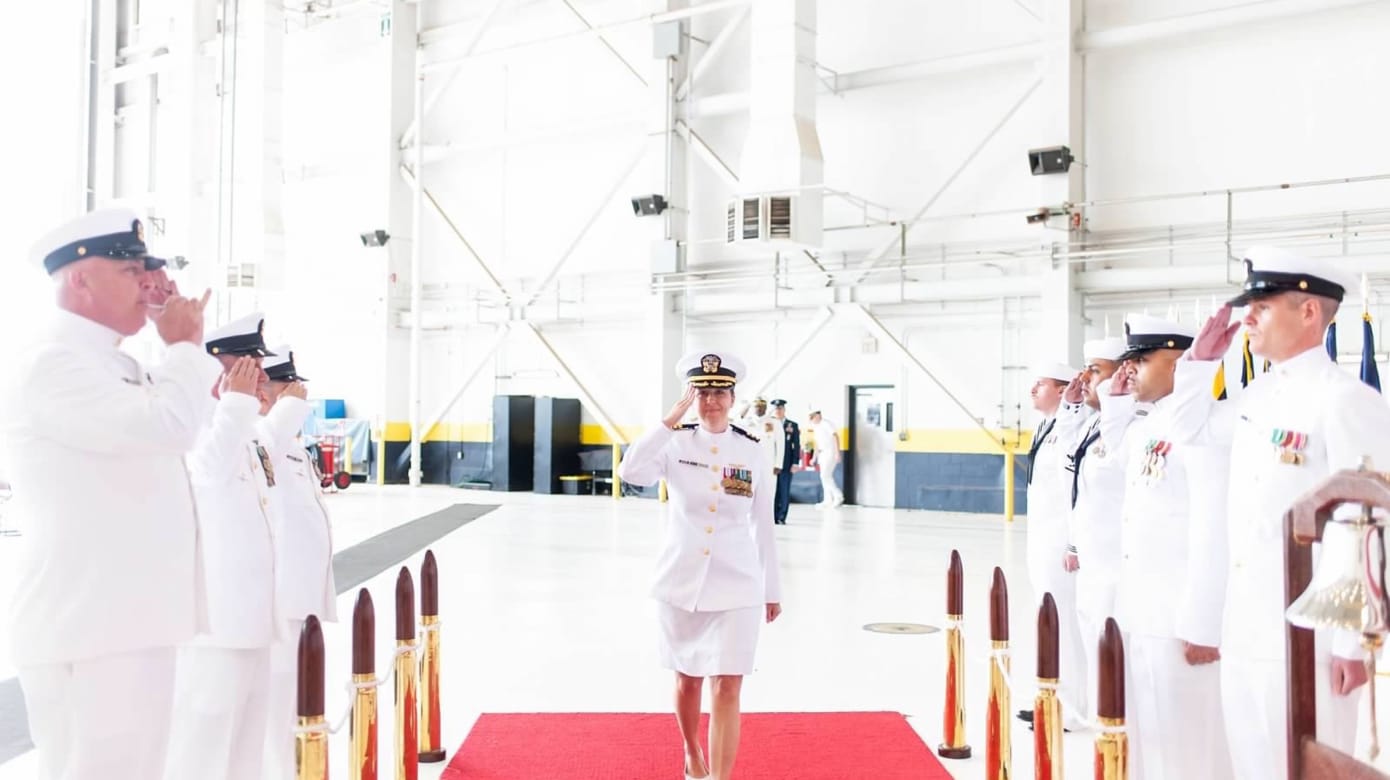 In May 2022, Tribal member Brooke H. Desrochers took charge of Fleet Air Reconnaissance Squadron 4, stationed at Tinker Air Force Base in Oklahoma City.
Desrochers was selected to be the Commanding Officer of a squadron of 550 Sailors — quite large for a naval aviation squadron — and leads them in the critical mission of nuclear command and control and strategic deterrence, employing the naval variant of the Boeing 707 called the E-6B Mercury.

“We are one of the more visible legs of the nuclear deterrence triad,” she said. “Our main mission is to get the emergency action message to the submarines in the event that we are attacked.”

Being selected to the position of Commanding Officer is a prestigious honor and the culmination of this Anderson family descendant’s 20-year career.

“Every tour that I’ve had has been building towards this set of orders and this achievement,” Desrochers said.

For their first tour, officers like Desrochers focus on learning the aircraft and their mission; the second tour moves into refining tactics and getting a grasp of “the 30,000-foot view” — how the individual plane and mission fits into the overall architecture of the U.S. Department of Defense. For their third tour, officers and train for two years in other areas of the Navy in order to become a well-rounded Naval officer. For Desrochers, that tour involved driving an aircraft carrier, which she described as “one of the cooler things I ever did.”

“And then you get selected to come back as a department head,” she continued. “You’re learning how to be upper and middle management … how to delegate and how to handle tasks and how to take care of a team of people.”

For Desrochers’ fifth tour, she served on the staff of United States Strategic Command (USSTRATCOM), which afforded her greater understanding of the nuclear enterprise, including submarines, bombers and intercontinental ballistic missiles — and the support requirements for their missions.

Now, at the peak of her career trajectory, her position as head of the Shadows of VQ-4 brings her service full circle as she teaches future generations of leaders.

“You get a brief period of time (as Commanding Officer) to try to take care of the squadron as best as you can,” Desrochers said. “Now I get to fine tune the direction a little bit, the trajectory the squadron is taking, and prioritize the things that I think are really important for our success and for mission accomplishment.”

Commander Desrochers places particular focus on safety when it comes to her squadron and the planes that they fly.

The Boeing 707 aircraft is more than 30 years old, she explained.

“We’re getting to a time in the service life of the aircraft that we’re starting to see some different maintenance challenges and some fly-to-failure parts are starting to let go. And so, one of my big priorities is the safe employment of the aircraft while being able to do our mission,” she said.

Desrochers leads her squadron in developing a culture of deliberate attention to detail in aircraft maintenance to ensure the safety of the aircrewmen who fly the planes. She carefully balances this essential safety component with the mission itself, which is “a 24/7/365 days a year nuclear command and control mission,” she explained. “Just being there and being ready all the time is, in and of itself, a nuclear deterrent.”

Commander Desrochers and her husband Max, whom she met at the United States Naval Academy, have been stationed near Oklahoma City several times since her service selection in 2005. The couple has served tours in Norfolk, Virginia, and Omaha, Nebraska, as well, but they value the proximity to family that their home base in Oklahoma affords. They both work as communications officers on the E-6B, and Desrochers has enjoyed being able to share the different phases of their careers.

“We decided that the best dual military Navy life that we could have was in an aviation community. And so, we just kind of started going through the milestones of flight school, and we both landed out here,” she said.

Maintaining connection with the Tribe took on even greater significance for Desrochers when her son, Vincent, was born and she enrolled him in the Tribe.

“When I was younger, my focus was entirely on the Navy and job progression and doing the tasks the Navy asks of you,” she said. “And then we had my son in 2009, and I had to register him with the Tribe. And that was maybe my first calling to pass on the traditions and heritage to the next generation.”

Now with three children, that connection continues to be a high priority for Commander Desrochers.

“I think in doing that and participating in those events and continuing the traditions, we share the heritage that they come from,” she said.

Desrochers said the family also likes to visit Lake Murray and enjoys water sports in the summer times. They have also been intentional about exploring new attractions around the state, such as Black Mesa and Alabaster Caverns State Parks.

“I think we’re kind of a normal family with the kiddos’ sports activities on the weekends,” she said.

Desrochers’ connection to her Tribal heritage also impacts how she views her role within the Navy.

As she progressed through her career, Desrochers grew more aware of the representation of minorities in the Navy.

“I became immediately aware of my minority status in terms of being a female, and that was something that I kind of grew up with as I aged in the Navy career,” she said. “But as I have become more senior in my Navy career, I’ve become more aware of the other aspects of minority, whether it’s religious orientation, sexual orientation, your race or creed. … I’m more aware of those things now because I see the need to promote that kind of diversity in order to get the most out of an organization.”

As a young Ensign, Desrochers experienced first-hand the benefit of seeing someone like her in a leadership position.

“I did have a female commanding officer; somebody doing the job that I’m doing right now,” she said. “She was doing it, and I didn’t appreciate it then how important it was to see somebody who looked like me that was up there in that position. It meant immediately that I knew that was something I could strive for and was in the realm of possible for me to achieve.”

Now, Desrochers strives to be a beacon not only for other women in the Navy but also for other Native Americans.

“I’m a little bit more free with that information (about my heritage) or take the opportunity to try to encourage some folks that are maybe in those smaller, less-represented minority groups,” she said.

Desrochers even discovered that one of her junior officers is also Potawatomi.

“I’ve never in my whole life just randomly met somebody who was also Potawatomi, who wasn’t related to me. … So I met her, and she was in my squadron. And we put it together, and I was like, ‘Man, this is awesome.’”

Through this tour as Commanding Officer of VQ-4 and beyond, Desrochers hopes to help pave the way for greater diversity within the Navy. Her Potawatomi name is Mno Mikas Kwe (Good Path Woman), and she wants to share the fruits of her experiences with others. For the present, she is laser-focused on her current assignment, leading her squadron with humility, attentiveness and integrity.

“I just try to do the best that I can do and be a responsible steward of this squadron and these airplanes,” she said. “The rest is going to sort itself out.”