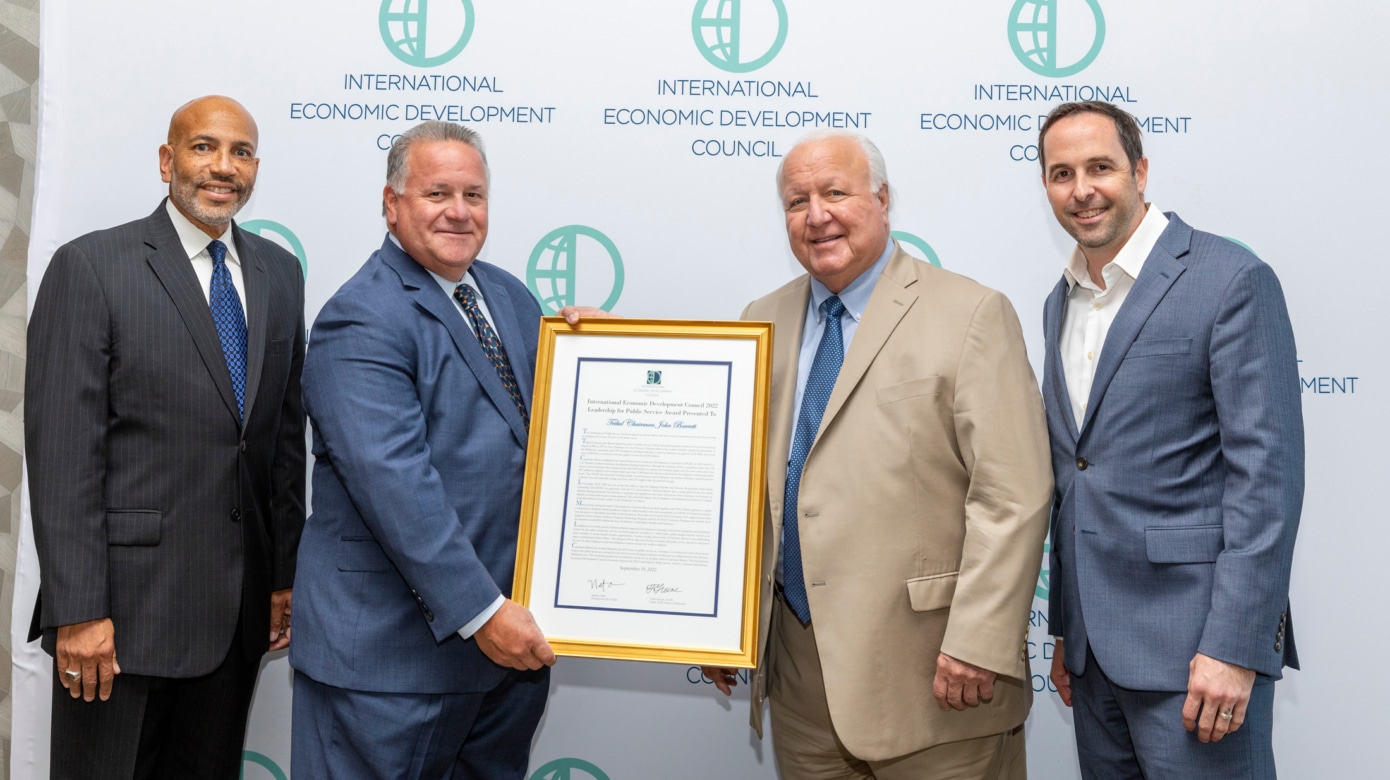 Citizen Potawatomi Nation Chairman John “Rocky” Barrett has held a leadership role in the Tribe since 1973. He was elected Chairman in 1985, and since then, many organizations and nonprofits have recognized his leadership skills, business acumen and overall dedication to helping the people of his Nation.

This year, he accepted three awards at the state and national level in honor of his career in public service, belief in servant leadership and decades-long devotion to the expansion of tribal sovereignty across the United States.

The Sovereignty Symposium held its annual event June 8 and 9, 2022, at the Skirvin Hotel in Oklahoma City and recognized Chairman Barrett as one of the recipients of its annual Sovereignty Awards.

Throughout his tenure, he has bolstered the Tribe’s ability to govern itself by making CPN an essential part of the surrounding community. Leaders from the Nation and from the City of Shawnee created a new collaborative initiative to work together as two functioning bodies. Shawnee Mayor Ed Bolt anticipates a bright future since the governments partnered together.

“Chairman’s been a very good neighbor to Shawnee, and they’ve done lots of good things for Shawnee over the years, whether it’s helping with the (community) pool or other projects. … We include each other in conversations that probably didn’t happen for a lot of years. It’s going to make things much easier for everyone going forward, and that’s going to benefit everyone,” he said.

Since the 1970s, Chairman Barrett has fought to preserve tribal sovereignty through the creation and adoption of CPN’s current constitution and statutes in 2007. He has also been a frequent speaker on American Indian economic development. Barrett previously served as a delegate of the United States Federally Recognized Tribes to the United Nations Committee on the Rights of Indigenous Peoples and on the International Advisory Council of the Native Nations Institute.

Chairman Barrett received a medal during the Sovereignty Symposium’s awards reception as well as an Eagle Coin gorget made by Muscogee and Seminole jewelry artist Kenneth Johnson, who was this year’s symposium featured artist. He designed the piece in recognition of the Tribe’s Eagle Aviary that celebrated its 10th anniversary this summer.

At the 2022 Gathering Business Summit in mid-July, the American Indian Chamber of Commerce of Oklahoma presented Chairman Barrett with the President’s Legacy of Servant Leadership Award at the Hard Rock Hotel & Casino in Tulsa, Oklahoma.

“This honor is reflective of the commitment shown by you and the Citizen Potawatomi Nation to the American Indian Chamber’s mission of building a stronger American Indian business community. CPN has consistently supported these efforts and makes a difference in AICCO’s ability to help Native business companies connect with opportunities and to flourish even in trying times,” said AICCO State Board President Baily Walker.

Chairman Barrett is also the founder of the National Indian Action Contractor Association and was a guest lecturer for the Harvard Project on American Indian Economic Development. During his leadership, CPN has become the largest employer in Pottawatomie County and exceeded an annual economic impact of $729 million.

The International Economic Development Council honored Chairman Barrett with the 2022 Leadership Award for Public Service at its annual conference in Oklahoma City. He accepted it on Monday, September 19 at the Oklahoma City Convention Center.
According to the IEDC, the award “recognizes an elected official who has served as a committed advocate for economic development for at least 10 years in the public sector.”

“When domination of tribal affairs by outside (especially federal) authorities was fostering economic lethargy and dependence, Chairman Barrett led the effort to have the Nation take over all of its economic and public service operations,” said Joseph P. Kalt, Co-Director of the Harvard Project on American Indian Economic Development.

The IEDC highlighted a few of his achievements, including CPN acting as one of the first tribes to sign the Helping Expedite and Advance Responsible Tribal Home Ownership (HEARTH) Act with the U.S. government, the CPCDC’s prioritization of women-owned businesses and the Nation’s adopted resolution to distribute federal pandemic funds to Tribal members economically affected by COVID-19.