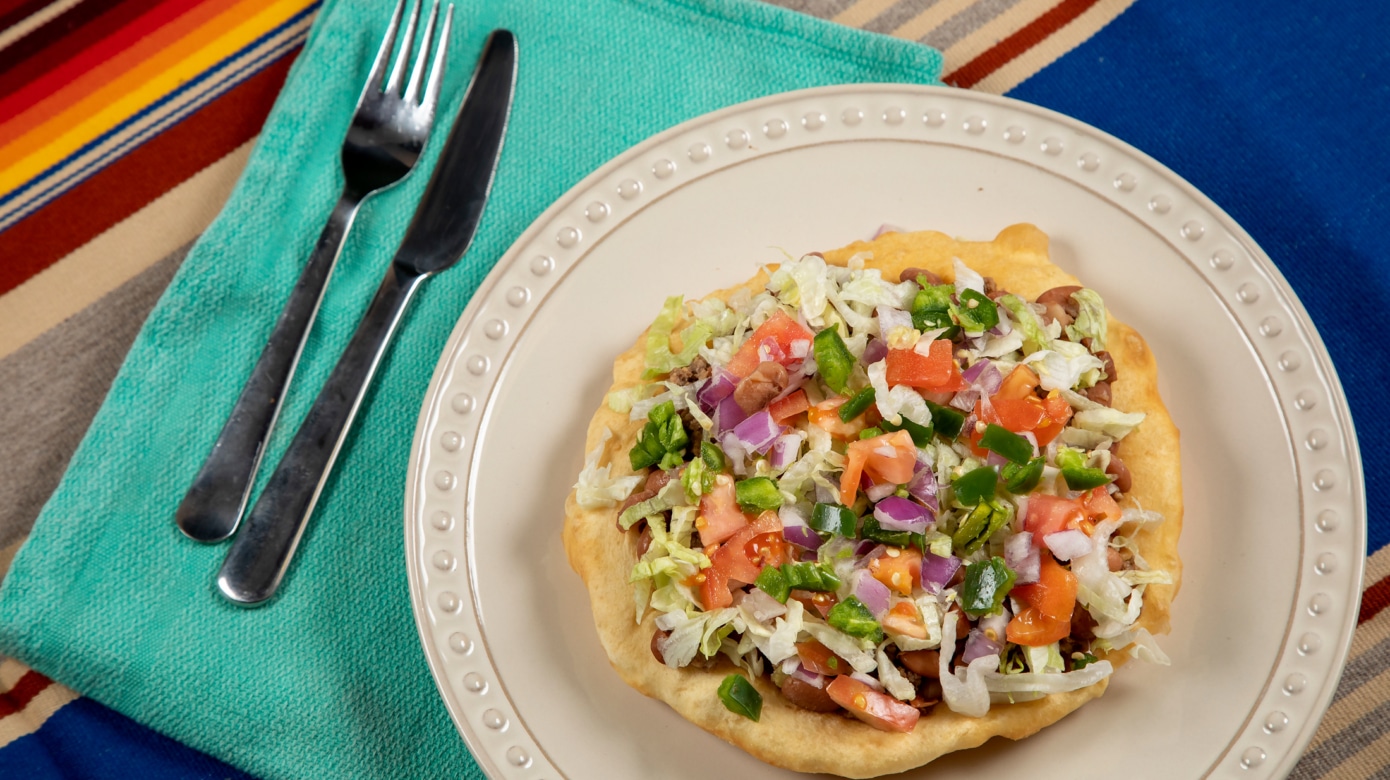 Try to remember the first time you took a bite of fry bread. Was it at the fair? In your nokmes’ (grandmother’s) kitchen? Was it covered in powdered sugar? Or a hint of honey? Did you dunk it in some mdamnabo (corn soup)? Was it piled high with taco toppings?

National Taco Day on October 4 celebrates the many ways to prepare one of America’s favorite dishes, including a base of fry bread. Citizen Potawatomi Nation employees serve up made-to-order fry bread tacos for lunch and dinner at FireLake Fry Bread Taco, which opened in 2014.

“All of our employees pretty much know how to make it,” said manager Preston Goombi. “We all make it pretty much the same way. Of course, you have your different variations at times just because not everybody makes the same dough-wise. … It’s made fresh every day, and we sell quite a bit of it.”

Not a traditional Native American food, fry bread originated out of necessity. In the mid-to late-1860s, the United States forcibly removed the Diné people from their ancestral homelands in what is now Arizona to present-day New Mexico, referred to as The Long Walk. Travelers began making fry bread from the limited rations handed out by the government to prevent starvation along the way.

“Frybread appears to be nothing more than fried dough — like an unsweetened funnel cake, but thicker and softer, full of air bubbles and reservoirs of grease — but it is revered by some as a symbol of Native pride and unity,” and resourcefulness, wrote Smithsonian Magazine’s Jen Miller.

Others consider fry bread a piece of colonial history and one that contributes to a list of the most prevalent health problems endured by Indigenous peoples today. In January 2005, Indian Country Today columnist Suzan Shown Harjo outlined her grievances against what she sarcastically called “a gift of Western civilization” in an op-ed piece.

“Frybread is emblematic of the long trails from home and freedom to confinement and rations. It’s the connecting dot between healthy children and obesity, hypertension, diabetes, dialysis, blindness, amputations and slow death,” Harjo wrote.

However, other tribal members consider it part of their heritage. They have good memories of learning to cook the perfect piece and enjoying it as a child, like Tribal member and Pecore family descendant Margaret Zientek.

“Saturday mornings, fry bread. Indian bread, as we called it. I had mine with syrup. Some of them had it with honey. We all had fry bread. It’s a favorite meal, and it was like a treat,” she said.

A January 2020 article by the Navajo Times reported the first fry bread taco, or “Navajo taco,” was created in 1964 at the Navajo Lodge’s restaurant by manager Lou Shepard. The idea came to him while serving a friend who told Shepard to surprise him. Looking around the kitchen, Shepard topped the bread with chili, beans, green chilis, lettuce and more.

“It was an immediate sensation, and it soon became the most popular item on the menu,” Navajo Times reporter Bill Donovan wrote. “Shepherd found himself making as many as 75 Navajo Tacos a day. Many of his customers would order it three or four times a week.”

Since 1964, the dish has permeated tribes from every region of North America. In 2014, Citizen Potawatomi Nation decided to open a restaurant near the Tribal complex to give customers more dining choices. FireLake Fry Bread Taco, located next to FireLake Discount Foods, became a unique establishment that served a menu unlike any other in the Oklahoma City metro.

“We’re still one of the only ones that do this year-round. And it’s just neat to see how much bigger this has gotten. In the past couple of weeks, (there have been) just people who have never been here coming in. It just makes it feel a sense of pride just because … the Tribe took a chance,” Goombi said.

“We like to not make the fry bread until they come in. Unless we have a line, then we have someone back there who’s making it all the time. But other than that, it’s fresh. It’s made fresh. It’s cooked fresh, and everything’s fresh,” said FireLake Restaurants Director Tammy Tate.

Many tribes across Indian Country have their version of the Indian taco, and everyone claims a secret to making the “best” fry bread. Some think it takes a bit of salt. Some add a bit of sugar to their dough. However, any recipe begins with a 2-to-1 flour and warm water ratio.

This summer, Zientek guided a group of CPN interns through making it, many of them for the first time. She explained to them the simple process that uses only a few ingredients.

“There’s a difference in your cooks and how they do it. I use all-purpose (flour), and normally, I’m going to do 3 cups of flour, 3 heaping teaspoons of baking powder, a teaspoon of salt and a very generous tablespoon of sugar,” she said.

Citizen Potawatomi Nation hosts a fry bread cooking competition at the annual Family Reunion Festival each June. Zientek has won before, but this year, she did not place. First place went to Dusti Graggs, a Wilmette family descendant who traveled from Enid, Oklahoma. She won the judges over, not only the first time she entered the competition but her first time making fry bread.

“All the ingredients were set out on the table. And so, I just did a dish and a dash and a prayer and went up, and I had no idea what I was doing. I asked a lot of questions during the competition, just to the neighbors sitting next to me, and by chance, I won. It’s kind of a fun little story. I know people have been making fry bread for years and years and years, and I’ve never done it before,” Graggs said.

Her excitement and surprise showed on her face as she accepted her prize. Graggs hopes to keep her winning streak alive and plans to enter again at next year’s Festival.

“I continue to do it. We’ll make fry bread from now on. I don’t know if I can not make it again,” she said.

Her win shows that anyone can achieve fluffy, crispy fry bread fit for an Indian taco with a bit of practice.