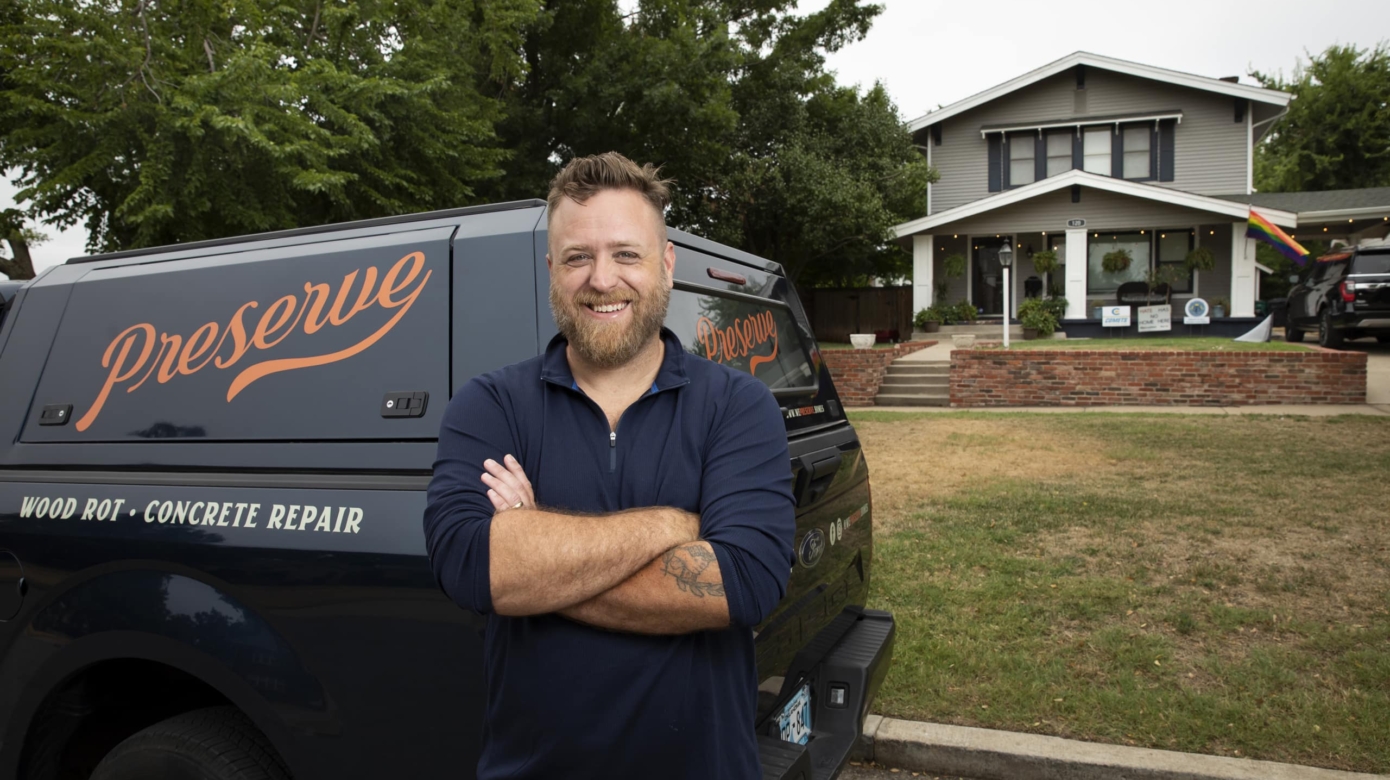 Ty McBride of We Preserve Homes

Bourassa descendant Ty McBride helps homeowners preserve their largest investment by combining the latest technology with respect for the environment.

“Our mission statement is that we save the future by preserving the past,” he said. “I think that’s what drives us.”

McBride and his family, including sister Jimmie Hodgkins, have been restoring homes and buildings in Oklahoma, Kansas, Texas and other states since 2016.

Some of the well-known sites previously under their care include the Harn Homestead and the Overholser Mansion in Oklahoma City, the Creek Nation Council House in Okmulgee, Oklahoma, and the Will Rogers Birthplace Ranch in Oolagah, Oklahoma.

McBride and his wife, April, started the business together, but his roots in home building go even further back to his grandfather, Jim McBride.

“My grandfather started building houses in 1972, so I’ve always been around the construction industry,” he said. “I found myself working on an old house in Oklahoma City and realized the unique challenges around working on something old that the community wants to save.”

McBride found a product called epoxy resin, which is approved by the National Park Service to repair damaged or decaying wood. His company uses it to repair many of the historic structures they have worked on, and he realized its potential value to homeowners everywhere.

Part of the challenge in preserving historic homes is that many of the parts that need to be replaced are no longer commercially available, McBride said.

“When you’re working on something old, even if it’s just 20 years old, (materials) can be really hard to source if you want it to match. That’s why most people choose to just replace everything,” he said.

McBride explained finding various construction materials became even more difficult during the pandemic. As the supply chain shortages emerged throughout the last two years, it became harder to get wood for windows, doors and other things.

“We just saw this huge opportunity where with the epoxy we can mold, mimic and permanently and sustainably repair rather than replace,” he said. “We can come in and repair it within a couple of hours, save people thousands of dollars and it’s really convenient. And it’s environmentally sustainable at the same time.”

He credits the influence of his grandfather, who helped him understand the importance of being environmentally responsible.

“These are the types of things that make sense, by keeping things longer, by repairing what you have, by not being wasteful,” McBride said. “It’s just common-sense environmentalism that everyone benefits from.”

His grandfather and father showed him how to put that into practice. McBride said he used to save concrete form boards for later use. Most construction firms throw the wood away and use new wood each time. He pulled the boards, removed the nails and neatly stacked the boards on his grandfather’s trailer. He filled a bucket with the nails for later use as well.

“It’s just one of those things that is always with me, that we don’t waste (because of) the harm that it causes our planet when we do that,” he said. “But it’s also just really smart because we save money and resources.”

With the continued popularity of home improvement television programs, more people are interested in reusing historic materials or preserving their home’s original character.

“I often tell people our goal is to end demo day, not celebrate it, and to do things that are worthy of repair in the future,” McBride said. “So, when we do repair, we want the repair to be high quality enough that someone else will follow behind us and also repair and not replace.”

But his work in preserving the past does not limit the kinds of homes he works on.

“Although I do enjoy those big, exciting projects — those landmark projects — most of our day is spent in south Oklahoma City, in Midwest City, Choctaw, Edmond,” McBride said. “We spend most of our day working for regular, everyday people, helping them create solutions so that they can repair rather than replace.”

McBride is proud of his company’s ability to help homeowners save money. He recalled one customer who needed to sell their home quickly. The inspection report revealed wood rot in the windows. The customer faced paying tens of thousands of dollars to replace their windows before the home could be sold.

“They were beside themselves on what to do. We were able to make the repair for less than five percent of the cost of replacement. They were able to sell their house and to meet that emergency they had,” McBride said.

“There’s so many moments like that where we’re just able to show up and say, ‘Good news, you don’t have to replace it. We can repair it. It’s going to cost you a fraction of that. And it’ll be done in two days.’ And people just get really excited about that. And that’s probably the best part.”

Repair using epoxy resin is convenient, affordable and a sustainable repair solution, according to the We Preserve Homes website. Epoxy can be used to repair wood rot and concrete cracks and breakage. Conventional remodeling, reconstruction and demolition can result in 37 million tons of wood debris and 381 million tons of concrete debris added to landfills each year.

Some areas of a home may need extra attention as it ages. McBride offers advice to homeowners on safeguarding their investment.

“With wood, you’ve got to keep an eye on is where your water is going,” he said. “The exterior of the house is built to protect it from water. And when water is getting on it, you need to be paying attention to those areas.”

Homeowners with sprinkler systems should ensure the sprinkler heads are facing away from the house, McBride advised. If the spray is continually hitting the house, that could create conditions where wood rot can develop.

Other tasks, such as ensuring gutter systems are free of debris, can also save headaches down the road, he said.

“The gutters on your house, are they working like they’re supposed to work? Are they making sure that they get the water off your roof and away from your house?” McBride asked. “If your gutters are full and they haven’t been cleaned out in a while, they can back up. That water can overflow and can find its way on to the different wood elements of the house and cause deterioration. It’s all about just watching where that water is going and making sure that it’s not going on your house.”

McBride is quick to credit his employees as a big part of the company’s success. Whether it is his sister, Hodgkins, or fellow CPN citizens like technician Blake Elwell, he is appreciative of their commitment.

“What makes us successful is the people that are here. We have some amazing people,” he said. “Jimmie, who is our business development manager, has developed the training for our epoxy technicians. There are people like our technician, Blake. On our social media or our Google reviews, nine times out of 10, they’re going to say how great Blake was. He’s just phenomenal. And along with our other technicians, they really make this work.”

McBride feels fortunate to be surrounded by his family and colleagues each day. While he acknowledges that working with family each day does come with occasional challenges, he feels blessed to do what he loves with the people closest to him.

For more information about home preservation and repair, visit wepreserve.homes.