Trail of Death caravan readies for next observance 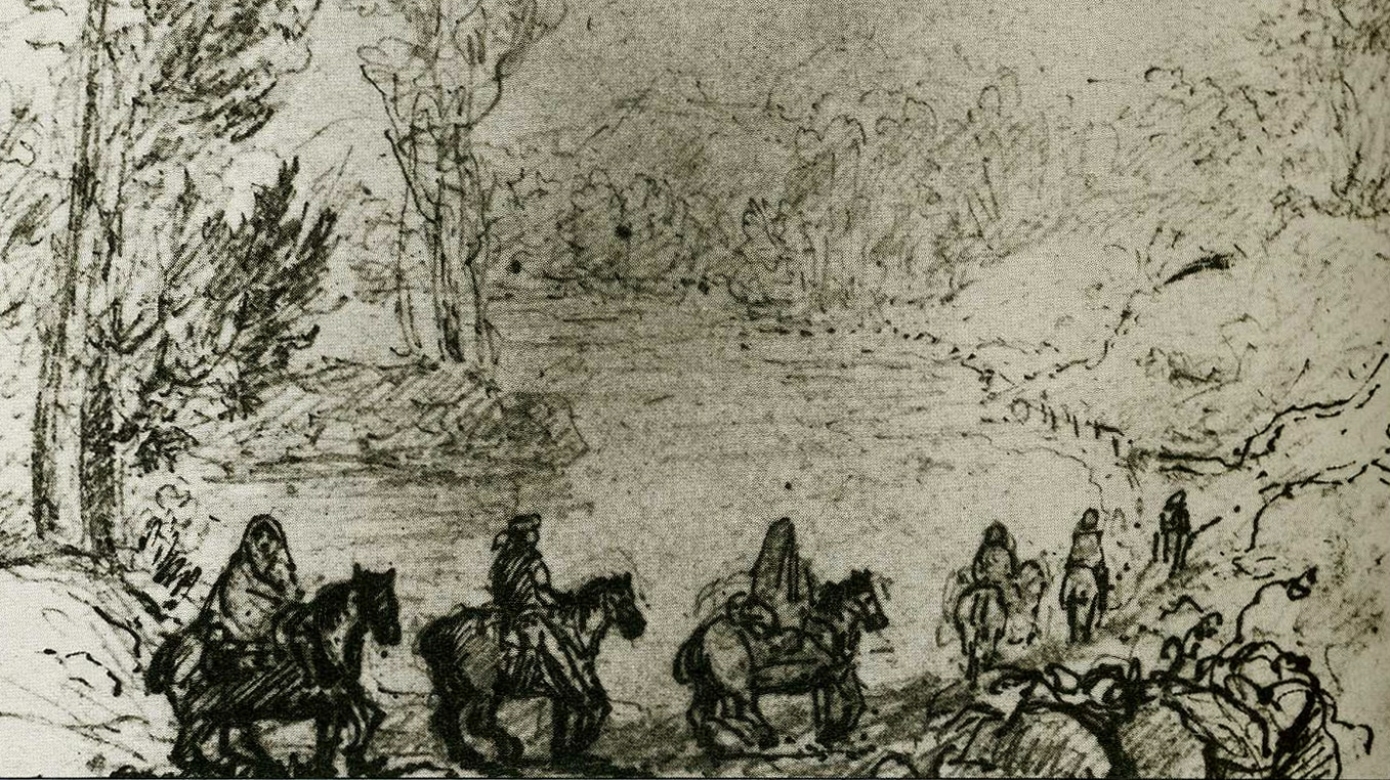 English artist George Winter captured the only known first-hand images of Native American removal during the Potawatomi Trail of Death.

In 1838, the state and federal governments forced the Potawatomi people to leave their Indiana homelands to make way for squatters who wanted Potawatomi lands. From Sept. 4 to Nov. 4, 1838, the United States forcibly removed a band of 859 Potawatomi and marched them from northern Indiana to present-day Kansas. Without adequate food and water and in oppressive heat, many Potawatomi became sick or died of exhaustion. During the 660-mile journey, 41 Potawatomi died.

A remembrance of this history is held every five years to honor victims and survivors. The next observance will be in 2023, said Janet A. Pearl, member-at-large, Potawatomi Trail of Death Association.

The organization’s mission is to preserve this history, memorialize those who did not survive and promote awareness of the Trail of Death. One of their main events is an organized caravan, retracing the original route the Potawatomi took during their ordeal.

“It feels like you’re there with them,” Pearl said. “It’s really hot and uncomfortable, and you feel like you’re suffering, but you realize you didn’t suffer anywhere near as much as they did. And you have great admiration for what they went through and thankfulness and gratefulness for it.”

Pearl has made the full journey and several partial journeys throughout the years. She has a deep connection to the Trail of Death. Her great-great-grandmother, Equa-Ke-Sec, was a small girl who was forced to make the journey. She survived and arrived in Kansas.

“I’ve been on the whole caravan, and it’s very emotional,” Pearl said. “(My great-great-grandmother) was a 6-year-old girl who walked the 660 miles from Indiana to Kansas with her sister. And we don’t know what happened to their parents. We think that maybe they died along the way.”

The sisters eventually arrived at Sugar Creek Mission in Kansas where the Missionary Sisters of the Sacred Heart cared for and educated many of the survivors. Equa-Ke-Sec was baptized by the missionaries, who changed her name to Teresa Living. It was in St. Marys, Kansas, where Equa-Ke-Sec met and married James Slavin.

“James Slavin was the Irishman who drove the bishop from Kansas City to the Jesuit College in St. Marys,” Pearl said. “They met there, and they got married. And then that’s how our family flourished.”

James and Teresa had three children, Mary, John and James. They all appear on the 1887 Citizen Band Potawatomi allotment roll in Oklahoma.

Pearl has been on the caravan several times with her father, Robert. She describes it as a powerful and moving experience.

Robert “Bob” Pearl, 96, has been on every caravan since its inception in 1988. Janet Pearl said the caravan is a great opportunity to learn more about Potawatomi ancestors. After her father retired, he was able to spend more time teaching Janet and her four sisters about their ancestors.

“We have spent a lot of time together traveling and going on the caravans,” Pearl said. “He really absorbed a lot of history, and he knew things from when he was a child. His mother taught him many things, and he is a great storyteller. I’ve absorbed things from him that I didn’t even realize.”

During the recent 2022 Family Reunion Festival in June, Pearl met with many Potawatomi at the CPN Cultural Heritage Center to talk about the caravan and its importance. She was excited to answer questions about the trip and share more about the experience.

Past caravan participants have told Pearl the trip was emotional, but fulfilling, and helped them connect with their Potawatomi ancestors who survived the journey. Pearl is a retired journalist, and she thrives on the many stories she has shared.

“We actually go to the places where our ancestors went,” Pearl said. “(Some of the townspeople) remembered a place where they heard spirits in the corn field from where (the Potawatomi) had walked through in the past.”

Since 2013, four U.S. states have placed a total of 80 Trail of Death markers along the route, helping to educate people about the events. Pearl said some local residents will meet the caravan and say how sorry they are for what happened and even offer meals and small gifts.

“It’s just amazing, the outpouring of support and concern from strangers,” Pearl said. “And then you hear stories about how some of the local people had offered food and concern to the original walkers on the trail, that they made food for them and gave them some food along the way.”

Pearl said since the Potawatomi lacked adequate supplies, some of the ladies in towns along the route would make food and hand it to the Potawatomi because the scant U.S. Army rations were rotten.

Caravan participants also have a chance to visit some of the same rivers and streams where their ancestors waded.

“There’s a place where we go that has spring water coming out of the ground, and people get down in there and drink it. And that’s the same water that our ancestors drank. There are creeks and rivers that people climb down into to be in the same water where our ancestors were,” Pearl said.

“I encourage everyone to get involved because we’re all descendants of some sort from removals and from these people that suffered. And we’re free today. And that’s why I think that we should celebrate that and remember them.”

Pearl urges those interested to join the caravan and experience the journey first-hand. They may contact the Trail of Death Association at pnginnthewoods@gmail.com or call 217-502-9340 for more information.

“Just send us your mailing information and email address,” Pearl said. “We will send more information about the caravan as we firm up our plans and our itinerary.”