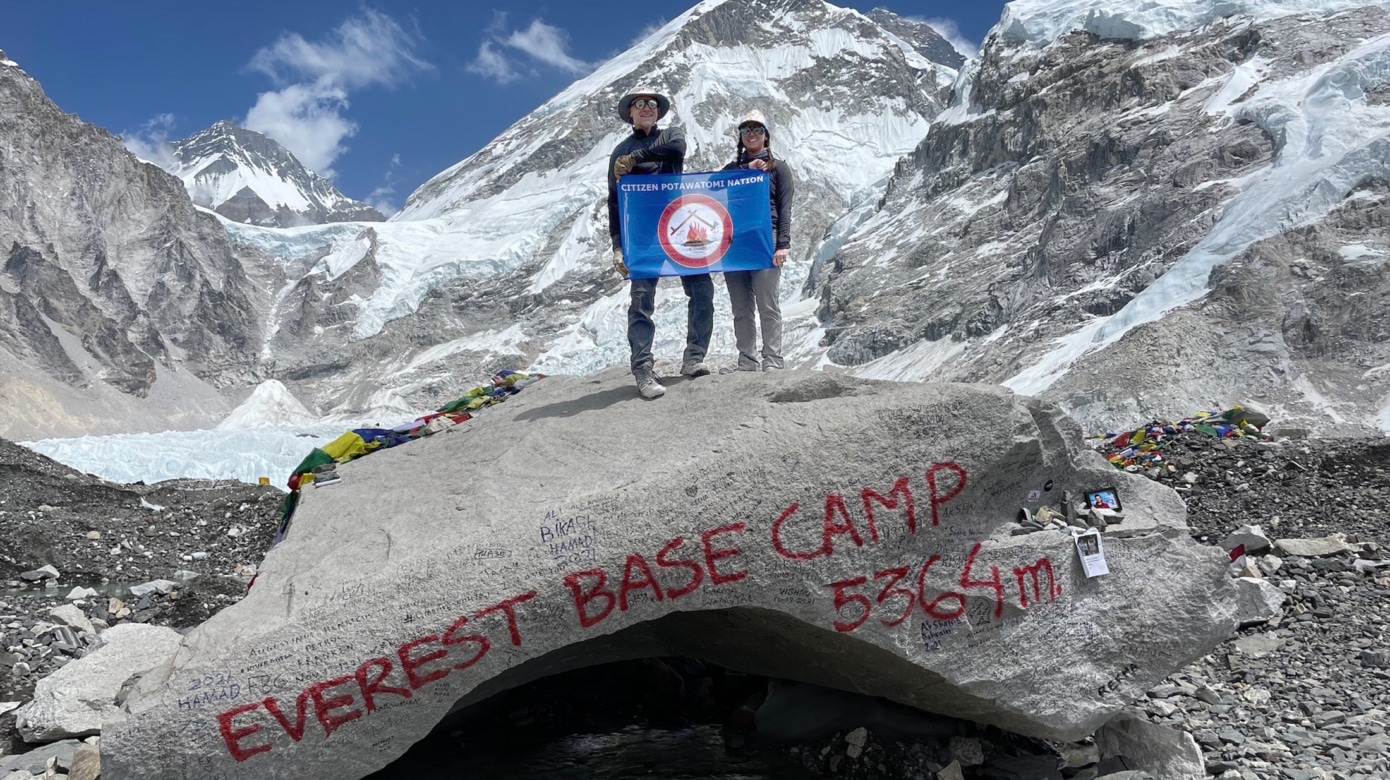 While visiting the world’s tallest peak halfway across the globe, a Potawatomi physician felt his connection to his ancestors grow even stronger.

Dr. Thomas Lewis and his wife, Dr. Stephanie Lewis, recently climbed to the Mt. Everest base camp in Nepal, which is at 5,364 meters, or 17,598 feet, above sea level.

Lewis is the medical director of Emergency Medical Services for Mercy Health System in Oklahoma, Missouri and Arkansas. He is board certified in emergency medicine.

The Burnett family descendant also studies altitude medicine with the Wilderness Medical Society. WMS was founded in 1983 in California to encourage research that improves scientific knowledge about human health activities in a wilderness environment.

He and Stephanie, who is also an emergency medicine physician, made extensive preparations to face the high altitude and other challenges. As Missouri residents, they live only about 1,000 feet above sea level. For six months prior to their trip, they committed to working out every day and used the stair climber machine in the gym.

Since climbers carry a nearly 40-pound backpack, Lewis said they are forced to make tough decisions. They must carry supplies such as water purification systems and cold weather gear. The water quality does not affect Nepalese people since their digestive systems are used to it. Western travelers, however, often become sick without purification. The weather on Mt. Everest is known for changing quickly, from rain to wind to snow. Each hiker must be prepared for extreme swings in weather conditions. Therefore, some “comfort” items have to be left behind.

Their WMS group was not part of the “extreme” climbing expeditions that attempt to reach the 29,032-foot summit of Mt. Everest. Extreme climbers often pay around $70,000 each to summit. They face risks such as blizzard-like conditions, avalanches, crevasse falls and altitude sickness. Since 1922, more than 300 people have died during their attempt to summit. At base camp, Lewis and his wife were able to meet some of the extreme climbers and learn more about their sport.

“It was pretty exciting,” he said. “When you’re in that environment, it’s overwhelming at first, just to get to that level. But you quickly realize that those (climbers) are risking it all.”

According to the U.S. Centers for Disease Control and Prevention, the symptoms of altitude sickness can include pounding headaches, dizziness, shortness of breath, nausea, fatigue, excessive coughing and more. If left untreated, altitude sickness can lead to potentially fatal conditions such as pulmonary edema (fluid in the lungs) or cerebral edema (brain swelling).

The casual hiker might be surprised at the amount of time it takes to make the climb to Everest base camp.

“To reach base camp takes about 12 to 14 days for most people. If you go much faster than that, everybody gets altitude sickness. You have to acclimatize,” Lewis said. “So, you climb a couple of thousand feet every day at that altitude and stay the night and then do another 2,000 or 3,000 feet in multiple days through those two weeks. You have to stop and stay two nights at the same altitude just so that your body can start to adjust to that thin air.”

Cultural connection
Lewis also met some of the legendary Sherpa, one of the Tibetan ethnic groups who are indigenous to the mountain regions of eastern Nepal. They are renowned for their superior climbing skills and endurance. Because they have lived in high altitudes for generations, they often work as climbing guides to tourists visiting the area.

“Everything goes up (the mountain) on the back of a Sherpa, whether it’s metal, roofing, insulation, concrete bags — all of those kinds of things are carried up the mountain,” he said.

Seeing how relentlessly the Sherpas work in such tough conditions made him think of his own ancestors.

“It really made me feel a little bit more connected to my heritage; the really difficult life and how strong our people must have been to survive 100 years ago,” Lewis said. “They had to work really hard to make a life for their family. It was so interesting to see how hard (Sherpas) worked for little things that we take for granted. I felt more connected to our people and how they must have lived 200 years ago.”

Lewis was amazed by the physical capabilities of the Sherpa.

“They are just genetically gifted people,” he said. “Many of the Sherpas lived at 6,000 feet and climbed to 20,000 feet. They were carrying 200 pounds on their backs. Guys my size, walking right by me like I was standing still. They’re just super strong people.”
He said their mental strength was striking as well. Despite the ever-present dangers of climbing Everest, the physical challenges and stress on their bodies, the Sherpas maintain a positive and happy culture.

A new perspective
Climbing Everest filled Lewis with a variety of emotions. It also changed his outlook on life.

“It just made us realize that some of the trials and tribulations in daily life are just so inconsequential,” he said. “We are here as long as our Creator allows us to be in this place. I feel like we came back with a much healthier perspective on our world.”

He was grateful for the strengthened bond he now feels with his Potawatomi ancestors.

“It was so powerful and interesting that being halfway around the world connected me more to our Nation and having more interest in how they lived before us,” Lewis said. “It was not what I expected. I didn’t expect to feel so connected like I did.”

Memories for a lifetime
In a trip loaded with memories, a few stand out for Lewis.

“I’ll never forget. It was early in the morning, and we were getting ready to climb. And seeing the sun rise over Everest, it was just a sight that will be impossible to forget,” he said. “And spending 21 days with the Sherpa, getting to know them, their struggles. Those relationships will be hard to forget.”

Lewis even left a bit of CPN history at the world’s tallest peak.

“There is a settlement that is known as the highest settlement in the world, called Gorakshep. It’s the last true settlement before you get to Everest base camp,” he said. “There are lots of nations’ flags from groups that have been to Everest. This is where we placed the CPN flag on the ceiling. It was the only Native American flag to be placed among the countries of the world.”

Another CPN flag flies at the base camp site, alongside the Nepalese and Tibetan prayer flags. These flags are said to carry prayers through the wind for those on Everest and in the Khumbu region, Lewis added.

He hopes to return one day and possibly include his children. The Lewis family has always enjoyed the outdoors and spending time in national parks. They take part in mountain climbing, hiking, swimming and other activities.

“We’ll look for other trips like this now that we’ve been there,” he said. “We feel extremely lucky that we had this opportunity. We’re excited about trying to find another adventure.”