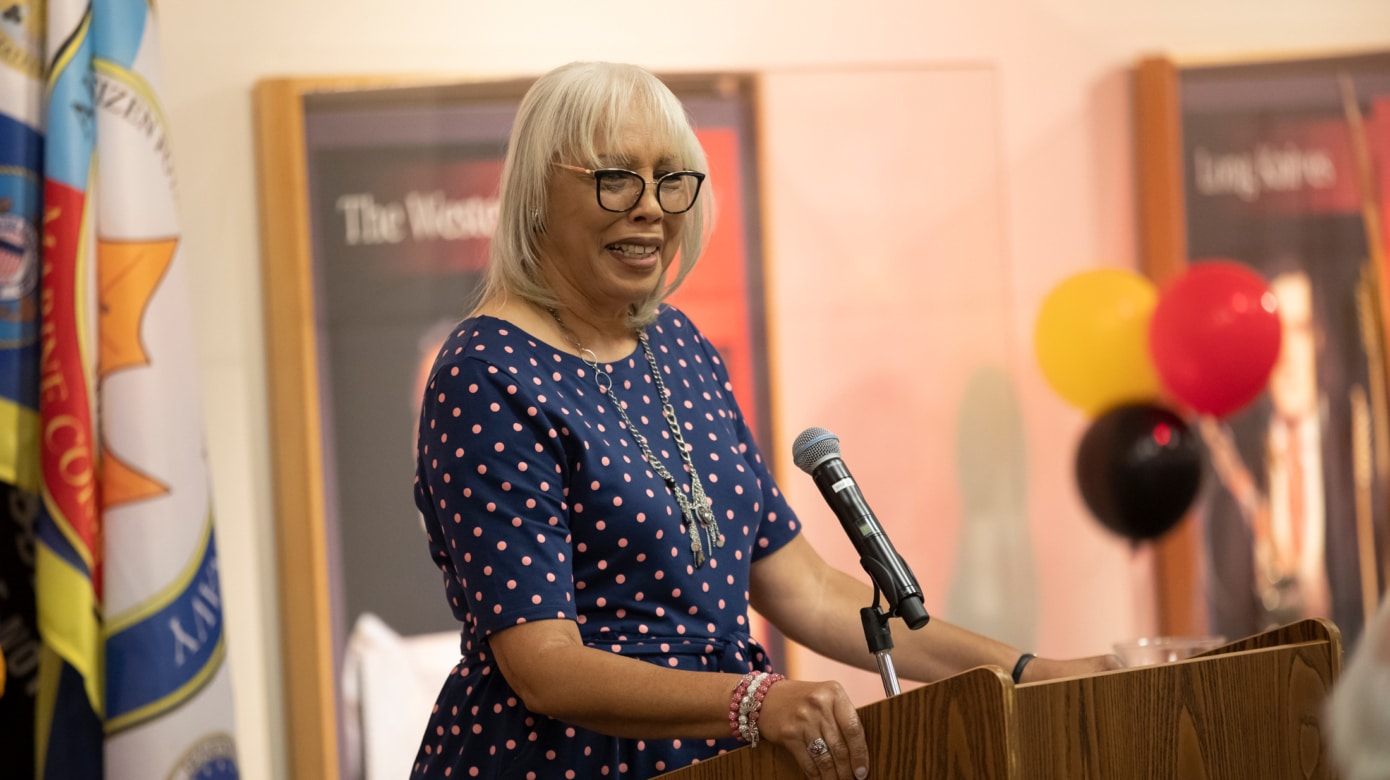 Shirley Nero of Clearview, Oklahoma, presents the history of the state’s all-Black towns during the 2022 Juneteenth VIP Reception.

On June 17, 2022, Citizen Potawatomi Nation and the Dunbar Heights Community of Shawnee, Oklahoma, held a VIP reception in honor of Juneteenth. Celebrations continued throughout the day on Saturday, June 18 that included a parade, prayer gathering and step dance performances, and culminated in an evening program of speakers and live music on CPN Festival grounds.

Juneteenth is the oldest celebration of the emancipation of enslaved people in the United States. A combination of the words “June nineteenth,” the holiday marks the anniversary of Union General Gordon Granger’s arrival in Galveston, Texas, in 1865. He brought with him the first news of the Emancipation Proclamation — signed by President Lincoln a full two years earlier — to enslaved people in some of the deepest parts of the former confederacy.

Though General Gordon Granger’s message of freedom is widely understood as the event that emancipated the last of those enslaved in the U.S., slaves held by Native nations in present-day Oklahoma were not freed until 1866. Citizen Potawatomi Nation’s partnership with the Dunbar Heights Community works to acknowledge this lesser-known history, repair the historical divides between Native American and Black communities, and pave the way toward a more just and equitable future.

Chairman Barrett and Vice-Chairman Linda Capps have established deep ties to the community through partnership on several efforts, including working with the City of Shawnee to add streetlights to the neighborhood and an upcoming tree-planting project.

“We had to gain trust of the community, that we weren’t trying to take over their beliefs, their culture, but that we wanted to be a helping hand, be a good neighbor,” CPN Human Resources Director Richard Brown told the Hownikan in a recent interview. “After building some of those relationships and trust, what we see is a predominantly Black neighborhood and a tribal nation showing that we can work together and thrive,” he said.

Slavery in Indian Territory
Clarence Prevost, pastor of Community Baptist Church in Wewoka, Oklahoma, and event committee member for the 2022 celebration, moved to Oklahoma from southeast Texas. In his youth, he saw Juneteenth widely celebrated, with festivities often filling cities for an entire week.

He was curious to find so little recognition of Juneteenth in Oklahoma and even more curious when his keenness for history drove him to uncover the depth of Black history in the state.

When he moved to the Shawnee area, Prevost learned of the extensive historical connection between Native Americans and African Americans in what was then Indian Territory.

The U.S. government forced many Black and Tribal people to present-day Oklahoma.
Slavery was not universally or uniformly practiced within the Five Tribes, or even within individual tribes. Nevertheless, the minority of slave-holding tribal members wielded sufficient political and economic power to substantially shape life within Indian Territory between the 1830s and 1920s, writes Annie Abel in The American Indian as Slaveholder and Secessionist.

Abel estimates that in the wake of removal, southern Native Nations enslaved more than 4,000 people west of the Mississippi; Claudio Saunt places that number at “perhaps as many as ten thousand” in “The Paradox of Freedom: Tribal Sovereignty and Emancipation during the Reconstruction of Indian Territory” from The Journal of Southern History.

Saunt traces how tribal sovereignty impacted both slavery and emancipation in Indian Territory. U.S. courts were divided as to whether the Emancipation Proclamation or 13th Amendment applied to Native nations, and the terms of emancipation were formalized through later Reconstruction treaties between the tribes and the federal government. While some tribes, or parts of tribes, had freed their slaves in 1863, full emancipation for slaves in Indian Territory would not come until August 1866.

All-Black towns
In addition to terms of emancipation, one of the pillars in the Reconstruction treaties was the cessation of tribal lands to the federal government for the settlement of other Native peoples.

“Pressured by U.S. government officials, the Seminoles turned over their entire domain, over two million acres, in exchange for lands in the Creek Nation. The Creeks themselves ceded over three million acres with only modest compensation,” writes Saunt. Parts of these lands would be assigned to the Citizen Potawatomi the following year.

As tribes and the federal government negotiated emancipation, incorporation of emancipated peoples into the tribes and allotment of lands, formerly enslaved people often chose land near one another and developed rich agricultural communities with their own schools, business, churches and eventually towns.

“From 1865 to 1920, African Americans created more than fifty identifiable towns and settlements” in Oklahoma, reports the Oklahoma Historical Society.

Though many of these all-Black towns were devastated during the Depression years, 13 of the original all-Black towns in Oklahoma remain: Boley, Brooksville, Clearview, Grayson, Langston, Lima, Red Bird, Rentiesville, Summit, Taft, Tatums, Tullahassee and Vernon. A 14th town, IXL, was incorporated in 2001.

Many of the same processes that shaped Indian Territory leading up to and following the Civil War shaped the history of all-Black towns in Oklahoma. The two histories are deeply intertwined, and even though the Citizen Potawatomi had not yet been removed to Indian Territory in the earliest parts of this history, the practice of fee-simple allotment established by the federal government through dealings with the Potawatomi beginning with the Treaty of 1861 was a major factor in the development of these all-Black towns.

Talking about history
For Tribal leadership, Dunbar Heights representatives and community members, Juneteenth is not only a time for celebration but an occasion for acknowledgement of history, how it impacts the present and a need for collaboration to create a better future.

The Dunbar Heights and Citizen Potawatomi Nation Juneteenth events this year were structured around a scaffolding of storytelling for precisely this reason.

Shirley Nero of Clearview, Oklahoma, addressed the crowd at the reception and recounted the histories of Oklahoma’s all-Black towns.

Nero also spoke about the Jim Crow laws passed by the Oklahoma legislature immediately following statehood, breaking down the “promised land” that Oklahoma had become for many Black people both within and outside of the territory. Racism did not end with the Civil War, and through discriminatory banking, loaning and renting practices as well as other instances of state-sanctioned social, economic and political violence, white settlers in the state worked to ensure Black communities and all-Black towns could not support themselves.

These injustices and their effects impact the material realities of Black communities in Oklahoma and across the country today; the fight for freedom continues on many fronts.

“Many people aren’t aware of Article 2 of the 13th Amendment,” Dunbar Heights Community Group President Timmy Young noted. “If you get a felony, you become a slave. … The people who wrote that knew what they were doing.”

Young spoke with the Hownikan about negative stereotypes perpetuated by media about Black people and how those misconceptions affect the daily lives of Black communities, as well as the derogatory language long used to describe the Dunbar Heights district of Shawnee. He addressed how Dunbar High School, the Black high school in Shawnee prior to integration in the 1950s, was eventually demolished and students were required to attend the white schools in town — one example of a widespread pattern of loss and destruction. He also spoke of the grossly disproportionate number of Black Americans killed by police each year.

“We have equality in many areas, but it’s not always represented in all the institutions across America,” Young said. “Black history is not taught. Native American history is not taught, even in Oklahoma. … Let’s be for real. Let’s talk about what’s really going on in the world.”

Unity for future
Young hopes above all for unity in the community and for a revitalization of the Dunbar Heights neighborhood. Long term, he would like to see development of transportation infrastructure and improved access to fresh produce and vital services for community members.

The partnership between CPN and Dunbar Heights breaks new ground as it reckons with the past and works together towards a more just, free and equitable future. Community leaders in the Shawnee area and beyond hope to see it become a model for other communities across the state and across the country.

CPN and Dunbar Heights’ partnership has even captured the attention of Opal Lee, the “grandmother of Juneteenth.” Lee has walked countless miles throughout the country to gain recognition for Juneteenth as a federal holiday, and President Biden signed the Juneteenth National Independence Day Act in 2021. She is currently in the process of building a national Juneteenth museum in Fort Worth, Texas, set to open in 2024.

Lee plans to visit Shawnee to meet with community and Tribal leaders, Brown announced during this year’s Juneteenth reception. She is keen to tell history of slavery and emancipation in Indian Territory in her museum, bringing the salient but oft-overlooked history to public attention in new and expanding ways.

Pastor Prevost hopes that everyone who comes to Shawnee will see what Citizen Potawatomi Nation and the Dunbar Heights Community are building together, return to their homes, and say, “We can do that here.”