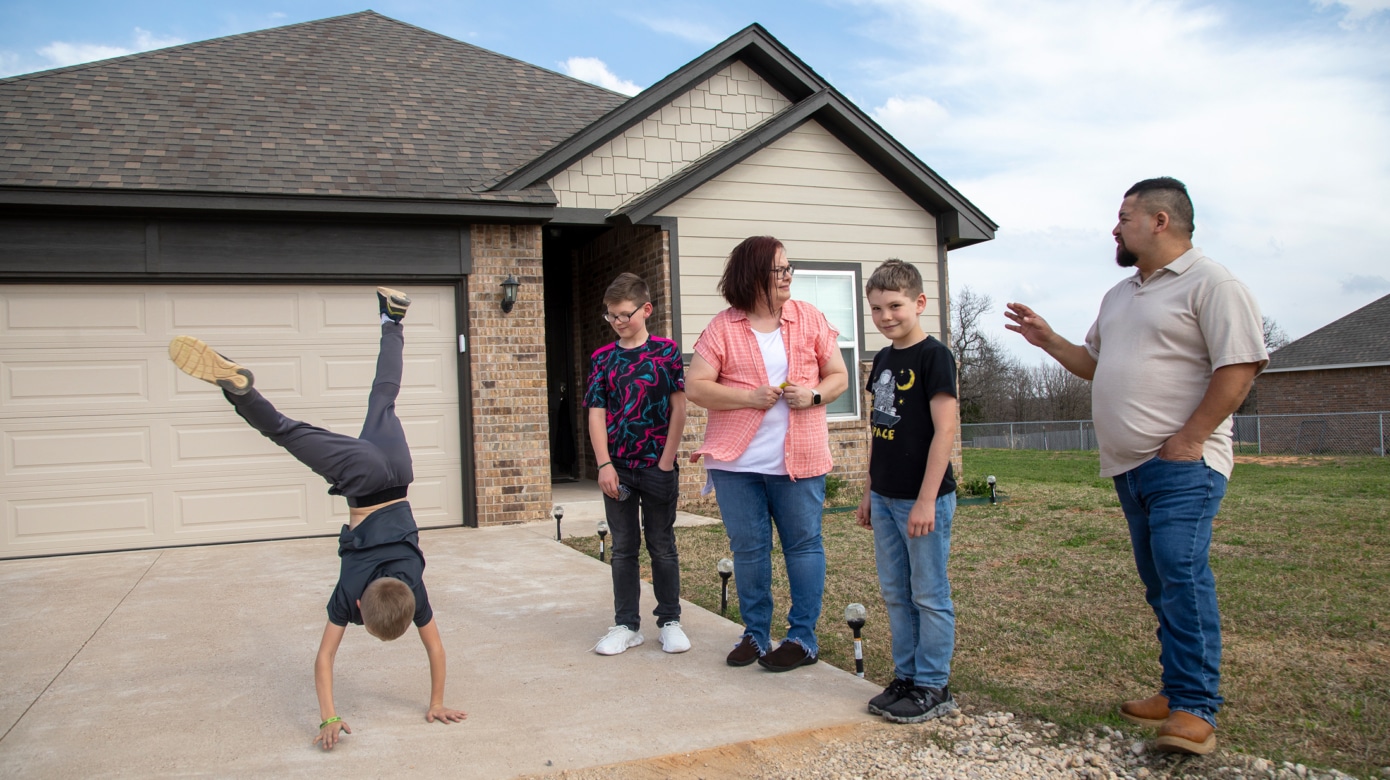 On a recent tour through their new house, Citizen Potawatomi Nation Tribal member Rogina Lopez, her husband Juan Lopez-Gonzalez and their three adopted sons, Wyatt, Rusty and Joaquin, buzzed with excitement. They showed off their bedrooms, a brand-new refrigerator and the two-car garage.

The family contacted the Citizen Potawatomi Nation Housing Department in November 2021 to inquire about its new lease with option to purchase program. It functions to help some Tribal members who meet certain U.S. Department of Housing and Urban Development low-income limits transition from renting to owning.

“I said, ‘Juan! This is it. This is our way to owning our home,’” Lopez said. “And I think it was over the weekend. The next day, I ended up contacting (them) for the application and how to go about it and everything.”

The program offers tenants a three-year lease with the option to purchase the property after it ends. The Housing Department requires they take part in credit counseling services with the Citizen Potawatomi Community Development Corporation to improve their credit score and prepare for homeownership.

The Melott family descendant and her family agreed to the requirements and sat on the waiting list through the beginning of the year. About halfway through March 2022, she contacted the department for an update from Program Manager Sherry Byers. They needed to move soon, and several different options presented themselves, including a rental. Lopez knew this program provided a direct path to finally owning a home.

“I just had this gut feeling, ‘What if I could sign this lease and the Potawatomi call me because they said I was on a waiting list?’ And so, I picked up the phone. Something just made me pick up the phone and say, ‘Hey, Sherry, where are we at?’” Lopez said.

Byers told them about a new house that the department recently added to the program — approximately 1,300 sq. feet with three bedrooms and two bathrooms within the Bethel Acres School District in Pottawatomie County. They wanted to move back to the area, and a few other members of their extended family planned to as well.

Things then moved very quickly. They agreed to the house, signed up for credit counseling services and moved approximately two weeks later.

“It was just like a whirlwind and everything,” Lopez said. “And … today I was sitting, getting ready. I sat on my bed, and I feel like I’ve been in a luxury motel. I don’t think this is my home. I feel like I’m in the luxury motel. That’s how I feel right now.”

She loves the pantry and the large closet space. The boys enjoy spreading out into two bedrooms instead of one, and Lopez-Gonzalez plans to add a workspace in the garage.

“It was kind of surprising because we were fixing to get into a different deal,” he said. “Then she called before we even signed the other lease. I said, ‘Oh, cool!’”

The agreement outlines payments that resemble a mortgage, which is potentially more than what some renters usually pay. All the payments then go toward the cost of the house when the tenants decide to buy. If they are prepared to purchase within the timeframe, the lessees may also qualify for a $20,000 buy-down grant toward the mortgage.

“The only issue, to some extent, is the income because (lessees) have to have enough income for these payments because they’re going to be set at something similar to what the house payment would be,” Byers said.

Lopez and her husband have looked forward to purchasing a home since they adopted her grandkids several years ago. Now, with help from the Tribe, they see it as a certainty rather than a possibility.

Find out more about the CPN Housing Department’s lease with option to purchase program and watch a video at cpn.news/leasevid. To learn more about CPN housing programs, visit cpn.news/housing or call 405-273-2833. Read about the Housing and Urban Development income limits at cpn.news/HUDlimits.