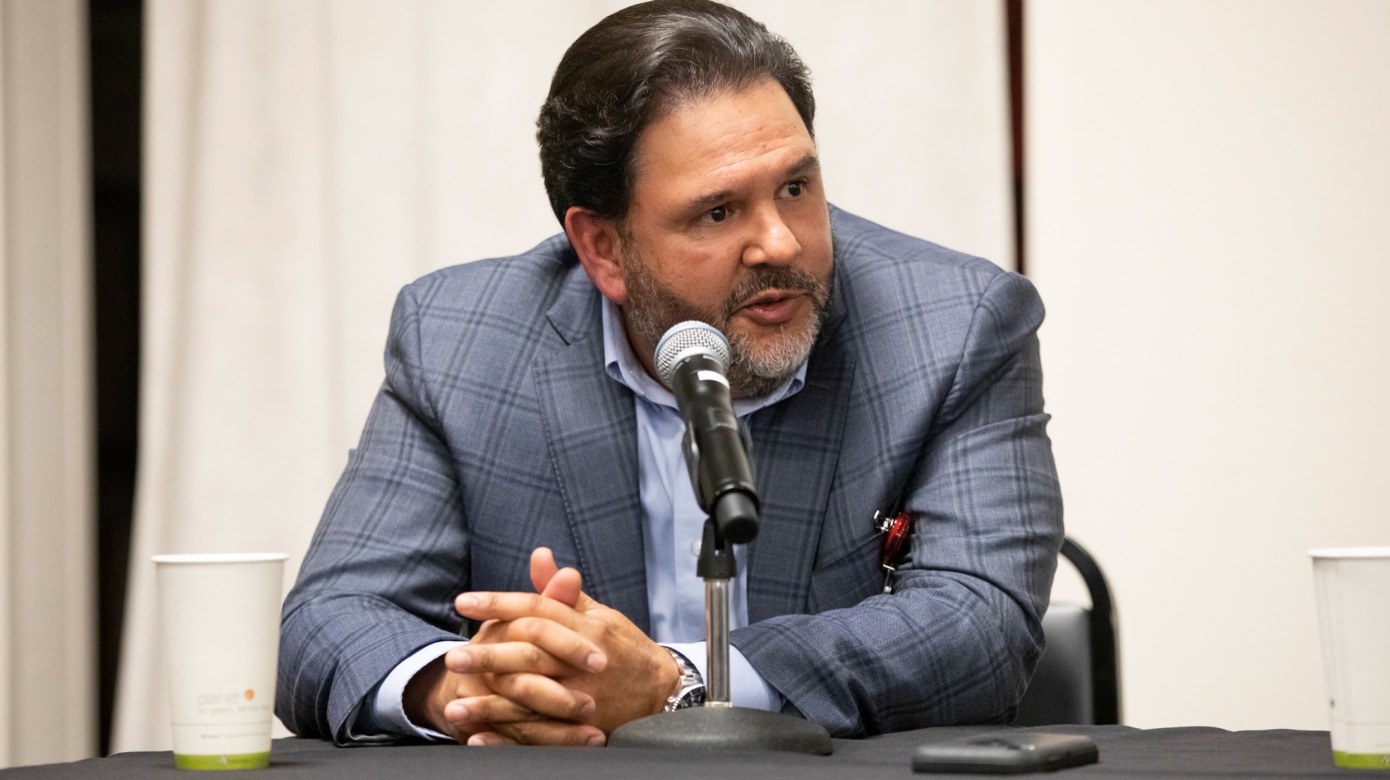 In the United States, synthetic opioids have become a token of drug overdoses. According to the Centers for Disease Control and Prevention, overdose deaths that included synthetic opioids, such as illegally manufactured fentanyl, rose more than 55 percent between Jan. 31, 2020, and Jan. 31, 2021. Many are accidental, and the problem has grown from one of addiction and recovery to one of public safety.

Citizen Potawatomi Nation Health Services hosted a community overdose awareness event in May 2022 at the CPN Cultural Heritage Center. More than 130 attendees watched a brief documentary, Dead on Arrival by Dominic Tierno, and listened to a panel discussion. Advocates and local resources also set up booths and answered questions.

The event sought to increase the public’s understanding of the recent uptick in fentanyl overdoses, sometimes referred to as “the silent crisis.” CPNHS Behavioral Health Psychologist Dr. Julio Rojas helped organize the event. In his experience, this type of substance abuse affects every socioeconomic background.

“It’s just human nature to hear about something like this and think, ‘Well, we don’t have this problem here. We don’t deal with this here.’ And that lack of information is just not the right attitude to have when there are dangerous drugs in our community. Now, we might say, ‘There have always been dangerous drugs in our community.’ True. But these are ‘one pill can kill’ kinds of substances. … We can’t be ignorant,” he said.

Rojas also notes these types of epidemics reach all communities; however, fentanyl overdoses disproportionally affect Native populations. According to the CDC, deaths involving opioids among Native Americans increased from 2.2 to 13.7 per 100,000 people between 2000 to 2016.

Rojas believes that “knowledge is power, and it allows us to feel like we can do something,” which gives value to events like the one hosted by his department to help reduce involuntary overdoses.

Pharmaceutical opioids for pain relief such as OxyContin and Vicodin include opium, the active ingredient traditionally derived from poppy plants. OxyContin’s popularity as a street drug exploded in the early 2000s. Purdue Pharma used unethical marketing practices to increase prescriptions and avoided a Food and Drug Administration black box label upon launch in 1995. Given its synthetic nature, fentanyl is cheaper and easier to manufacture, allowing illegal producers to significantly cut their costs and increase their profit margins.

According to the United States Drug Enforcement Administration, the synthetic opioid fentanyl is “50 to 100 times stronger than morphine” and was “developed for pain management treatment of cancer patients,” often as part of palliative or end-of-life care. The DEA also notes “2 milligrams of fentanyl can be lethal depending on a person’s body size, tolerance and past usage.” Their analysis of counterfeit pills found that more than 40 percent of them contained at least 2 milligrams.

Mark Woodward from the Oklahoma Bureau of Narcotics told event attendees that now, almost every street pill or any other type of drug the department encounters — including cocaine, heroin and methamphetamine — includes fentanyl. They look like any other pharmaceutical or illegal substance, or even over-the-counter drugs like Tylenol.

Oklahoma County District Court Judge Kenneth Stoner runs the Oklahoma County Treatment Courts. He described fentanyl’s pervasiveness as “Russian roulette” to the event crowd and said he keeps Narcan, an overdose-reversal nasal spray containing naloxone, on his bench in the courtroom. He has seen program participants come back to court after relapsing who test positive for fentanyl without knowing they ingested it.

According to OBN’s Mark Woodward, Oklahoma saw a 151 percent increase in fentanyl-related overdoses between 2019 and 2020. He said that currently, Oklahoma City hospitals receive between seven and 10 overdoses each day.

“The drug trafficking organizations out of Mexico are getting the fentanyl from China, but we’re talking about right here on the streets of Oklahoma City and Shawnee and Tecumseh,” Woodward said. “And where we are finding the majority of the sources of the drugs that lead to an overdose, it is somebody that they know. And it is somebody they trusted,” like a boyfriend, girlfriend or close friend unaware of the addition of fentanyl.

Kyearra Morris is the business development director for Stonegate Center in Azle, Texas. She helped coordinate the event and at that time had attended 18 funerals since the first week of January 2022 for individuals who died from fentanyl overdoses. She emphasized youths’ inclination to experiment with drugs and the ease of access.

“We don’t need to go and find a hookup someplace,” Morris said. “All we need is Snapchat, Instagram, Facebook. Our phone is in our hand. We can have it delivered to our front door. They can drop it off in our mailbox. We can go to school and meet a friend. It can be something like, ‘I think I’m taking an Adderall or a Xanax,’ and it is fentanyl.”

The staggering rise in overdoses, accompanied by the fact many users were unaware of fentanyl in those substances, has caused many advocates to refer to them as “fentanyl poisonings” instead.

The documentary Dead on Arrival, screened before the panel discussion, told the story of several youths under 20 years old who died of accidental fentanyl overdoses. Lisa Carpenter Grant spoke on the panel about losing her son, Rylee, at 29 years old. He died of a fentanyl overdose in April 2022, despite being an experienced drug user purposefully trying to avoid synthetic opioids.

“I think he thought he was smoking meth, and it was laced with fentanyl because toxicology found meth and fentanyl. I don’t believe he would have ever used alone. He was too smart for that. So, it was an accident. He had no intention of dying that day,” she said.

Founded in 2020, the Oklahoma Harm Reduction Alliance offered free supplies and Narcan kits to everyone at the event. The organization’s motto is “Narcan your friends.” Their table included naloxone, fentanyl test strips and much more. They also accept online orders and then mail supplies around the state. OKHRA Director of Operations Hailey Ferguson emphasized they serve anyone and everyone.

“We are really just about meeting people where they are, not where we expect them to be, without judgment or shame. We are very big on linking people to trusted community providers to make sure our participants are sure (of their choice) wherever they go,” she said.

Ann Benson from Parents Helping Parents spoke to the crowd about the power of connecting with others in the same situation, including those, such as herself, whose children deal with addiction.

“We realize when we’re connected, we can have the power to understand our own wellness is important as well. This isn’t just impacting others: our own health and our mental health, our physical health, our spiritual health. Everything becomes impacted,” Benson said.

Parents Helping Parents brings in panelists much like the CPNHS event, and she emphasized that while no “magic formula” for healing exists, meeting collectively “can be a game-changer.”

CPNHS’ Dr. Rojas believes one of the most critical resources is therapy — especially for young people — and combating overdoses and deaths requires exploration into the appeal of experimentation with mind-altering substances.

Attendee Robin Brothers took Dr. Rojas’ comments to heart after listening to the panel discuss resources. As a nursing professor at Oklahoma Baptist University in Shawnee and support group leader, she hopes to use her influence and voice “to raise awareness. To notice people that might be struggling mentally and reach out to them and let them know it’s okay to reach out.”

Stonegate Center’s Kyearra Morris also spoke about the life-saving properties of Narcan. She and several other panel members and resource providers agreed with her about the need to make it universally accessible.

Pottawatomie County Sheriff’s Office Deputy Nick Doe carries Narcan in his patrol unit. He shared his story with attendees about saving a young woman’s life the month before. During an overnight patrol shift, he was closer to her location than a dispatched ambulance and arrived first.

Drew LaBoon, Director of Admission and Marketing for Country Road Recovery, is a recovering addict and now helps others work toward sobriety. He believes Narcan provides an effective conversation starter for parents trying to talk to their children about fentanyl. It allows them to discuss its effects from the perspective of overcoming an overdose — zero judgment while providing a solution.

Linda Koop attended the event with her girlfriend and had no prior knowledge of fentanyl, its dangers, or its effect on communities across the United States. After listening to the panel and watching the movie, she said she was “blown away” and “overwhelmed.”

“I came because I wanted to be educated on this because I have no clue. If you don’t have any family members involved, it’s something we need to be aware of. Now, I’m anxious to share what I’ve learned,” she said.

Morris hopes to continue leading more events like the one hosted by CPNHS in an effort to reduce overdoses through knowledge.

Order Narcan kits from the Oklahoma Harm Reduction Alliance at okhra.org, and watch Dead on Arrival at cpn.news/DOA.