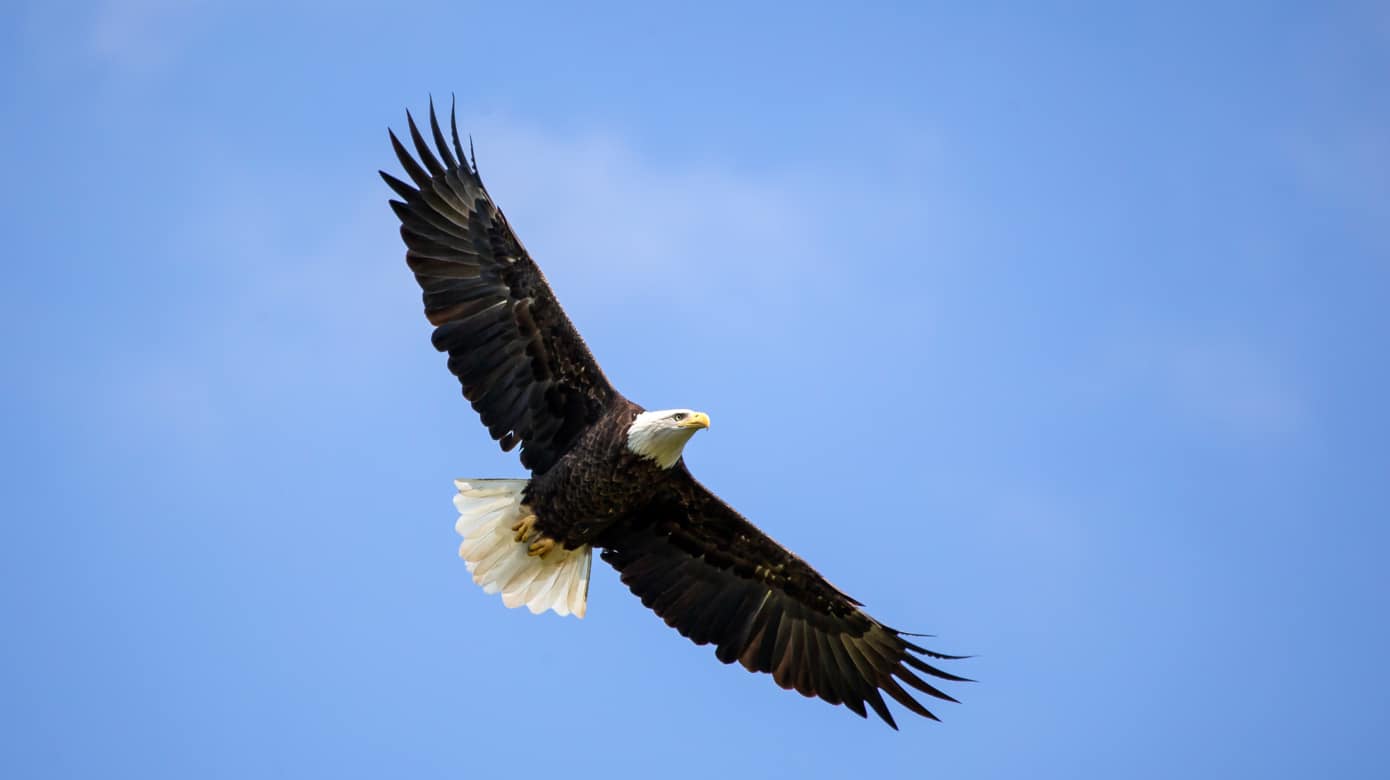 The Citizen Potawatomi Nation Eagle Aviary received its U.S. Fish and Wildlife permit and opened its doors one decade ago this June. Aviary managers Jennifer Randell and Bree Dunham are excited and honored to celebrate the milestone in the company of family and friends at this year’s Family Reunion Festival, just as they did in 2012.

The Festival remains the highlight of the year for Randell and Dunham, and connecting Tribal members with the living eagle is a central part of their mission. The sisters sat down with the Hownikan to reflect on the last decade of caring for these sacred animals and what the next 10 years may bring.

Randell and Dunham came by their current role quite personally. Their mother walked on suddenly and unexpectedly in 2008, and the loss devastated them. In their grief, they set out on a series of eagle watches across the U.S., inspired by the eagle feather the Tribe presented to their family in honor of their mother.

“It was a very healing time to be outside,” Randell said. “And we had some experiences with eagles and things I don’t think I can explain.”

During the course of their travels following the eagles, Randell and Dunham attended a presentation about Native American eagle aviaries at Kaw Lake Eagle Watch by Iowa tribal veteran Gary Siftar. He told the group that eagles were losing their lives due to a lack of placements for injured and non-releasable birds.

Randell and Dunham knew immediately they needed to get CPN involved in helping to protect these birds’ lives. Their grandmother, former CPN Secretary-Treasurer Beverly Hughes, set up a meeting for them with Chairman John “Rocky” Barrett, and he tasked them with finding out the requisites for opening a Tribal aviary.

The next two years were filled with research and training. Construction on the two enclosures and indoor viewing area began in 2010, funded by a U.S. Fish and Wildlife grant with matching investment from the Tribe. The CPN Aviary officially opened during Family Reunion Festival in 2012, providing a home to eight eagles.

The Aviary and its staff revolve entirely around the schedule and needs of the birds. Though they try to keep consistent routines, different seasons have different requirements, and the nature of work in wildlife care means that Dunham and Randell rarely live the same day twice.

In the summertime especially, the routines around the aviary shift to accommodate the Oklahoma heat, which the birds show less tolerance for than the cold in the wintertime. Randell and Dunham rise at dawn to feed the eagles and clean the enclosures, then wait until the heat breaks in the evening to return to any remaining tasks that might cause the birds’ body temperature to rise.

“We’ve learned how to live in seasons here,” Randell told the Hownikan. “And every season’s a little different here with these eagles. It took me a couple of years to get out of that 9-to-5 rhythm. … But it’s all about what (the birds) need.”

Beyond day-to-day operations, the eagles also guide Randell and Dunham with their remarkable stories and personalities.

“Honestly, I would have to say the biggest thing for me is an overall sense of getting out of our way and letting these eagles, letting that energy and that connectedness kind of just do its own thing,” Dunham reflected. “There are just so many instances where I can tell you the healing aspect of these birds is just really incredible, and we can’t take credit for that.”

One of the first eagles to come to the CPN Aviary was the widely known and beloved Wadasé Zhabwé (Brave Breakthrough), who, after recovering from a wingtip fracture, was the first to be released from the CPN Eagle Aviary in 2013 — and the first among all Native American aviaries to be released outfitted with telemetry technology.

The CPN aviary was not initially permitted to rehabilitate and release birds, but as the team got to know Wadasé, it became clear that this was the right path for her.

“She basically rehabbed herself,” said Randell. “She was doing figure eights in the enclosure one morning and she never quit. … So, after some conversation with (the U.S. Fish and Wildlife Service), … we did receive special permission to release her back to the wild.”

The type of telemetry backpack on Wadasé Zhabwé usually stays on about six months before the fabric breaks down, as it is designed to do. Wadasé, however, continued to forge her own path, transmitting seven and a half years’ worth of data. She’s been all over Oklahoma and visits the CPN Aviary almost every September now that she is firmly established in the wild. Wadasé did not return to CPN last fall, and Randell and Dunham believe that she most likely nested in an area she frequents just northwest of Chickasha, Oklahoma — near where the sisters themselves used to live.

Another remarkable phenomenon that continues to capture the attention of aviary staff and community members alike is the nesting pair currently residing at CPN, Kyla and Charlie.

They make quite the couple, with Kyla being the largest eagle on the property at 14 pounds, and little 5-pound Charlie also known around the Aviary as “nervous man” because of his anxiety — that is, until Kyla arrived just a few months after him in September 2012. He followed her around from day one, and the pair made their first nest that winter, a rarity among birds in captivity.

Due to each bird’s injuries, the aviary staff did not expect any fertilized eggs. But Kyla became depressed and agitated when, for the fourth year, her eggs did not hatch.

Randell and Dunham knew that Kyla needed to be a mother if she was going to live a healthy and thriving life. They partnered with the Comanche Nation aviary, which had a tawny eagle chick whose parents had rejected it, and brought the tawny chick to Kyla and Charlie as a foster. The pair took to their new roles as parents perfectly, and for the first time in known history, bald eagles raised a tawny eagle chick, which are native to the African continent. The chick grew strong and was sent to Natural Encounters in Florida with hopes his future offspring will return to the wild in Africa.

In 2017, Randell and Dunham prepared to bring in another chick for Kyla and Charlie to foster. However, on the very day they planned to pick it up, one of Kyla’s eggs hatched. Tiny and deemed unlikely to survive the night, Mko Kno (Bear Eagle) not only survived but surpassed his dad in size at just 9 weeks old. After again receiving special permission from Fish and Wildlife, Randell and Dunham prepared the chick for release. He, too, was fitted with a telemetry device but shed it after just five and a half months. He is believed to be doing well, with data showing travels to Nebraska, Missouri and Kansas.

Beyond providing the best care for eagles and other wildlife that may need it, the Aviary staff are committed to and motivated by connecting with their community, both in the surrounding areas in Oklahoma and with Tribal members across the world.

Randell said the outpouring of support from the community has been far beyond anything she could have imagined when the Aviary first opened.

“I am so happy with our Tribe’s progression, and we have incredible enterprises,” she said. “But to be able to kind of sit down with people and let them sit in front of an eagle and share our cultural ways, it really has been eye-opening for people. You see almost their whole body language change.”

Randell and Dunham take the process of filling feather requests seriously and personally, allowing the feathers to speak to them and matching them carefully with Tribal members.

Since its opening 10 years ago, the Aviary has undergone many changes and improvements. Dunham and Randell no longer live in a Federal Emergency Management Agency trailer next to the enclosure, but in a house up on the hill; bridge repairs provide improved access to what is now named Aviary Lane; and the staff just hired their third employee, the first besides Randell and Dunham. Sixteen birds currently call the CPN Aviary home, including 12 bald eagles, two golden eagles, one Harris’s hawk and an augur buzzard. With the help of the CPN Department of Environmental Protections, flood waters have been diverted, and a conservation area full of diverse wildlife is burgeoning on the property.

As they look forward, Randell and Dunham point to a new, permanent entrance currently under construction and dream of a pond with fish for the birds in the distant future. They would also like to develop the Aviary into a site for rehabilitation and release over the next 10 to 15 years.

For the Potawatomi, releasing eagles when possible is incredibly important.

“We have the story that Eagle helped save mankind,” Randell told the Hownikan. “And so, we would always want to release our eagles because they’re our messengers. The Zuni tribe would never release an eagle because of how they do ceremonies. So it’s nothing right or wrong; it’s just that we’re all a little different in our cultural ways.”

Each release so far, while incredible, has been under special dispensation from the U.S. Fish and Wildlife Service. Believing that CPN is uniquely situated to provide such care, Dunham hopes to invest in the expansions, training and permits necessary to regularly rehabilitate and release birds.

Whether caring for birds that will not be released or advocating for those who can and should be released, Randell and Dunham feel honored to hold such a special role.

“You know, he (Eagle) intervened for us, and I think it’s important that we intervene on their behalf when they’re injured,” Dunham said. “They’re like our veterans coming home, and it’s time for us to take care of them. And so, for us to have the opportunity to do that is really so much more than what I thought we would be doing when we were sitting in that eagle watch. It’s so much more.”

As the story of the CPN Eagle Aviary comes full circle this June, Randell and Dunham look forward to marking the exciting occasion with family and friends during this year’s Family Reunion Festival.

“What better way to celebrate than to have all of our Tribal members here? We really love that,” Randell said.

Tours of the Aviary will be available during this year’s Festival. Tribal members should sign up at the Cultural Heritage Center and will be bussed to the Aviary from the Heritage Center. Tours run during the mornings Friday through Sunday and are approximately one hour long.

In the afternoons, the Aviary staff hopes to bring Nikan, the friendly and comic augur buzzard, to the Cultural Heritage Center for Tribal members who want to meet him and ask questions about the Aviary.

Tribal members near Shawnee, Oklahoma, area may find it easier to come to the Aviary at other times of year due to the volume of visitors during Festival weekend. Reserve tours for Thursdays, Fridays and Saturdays at potawatomiheritage.com/aviary. 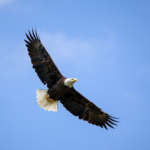 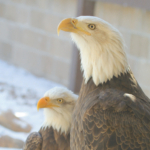 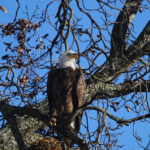 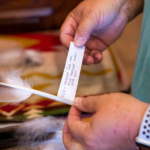