Then and now: 50 years of Festival 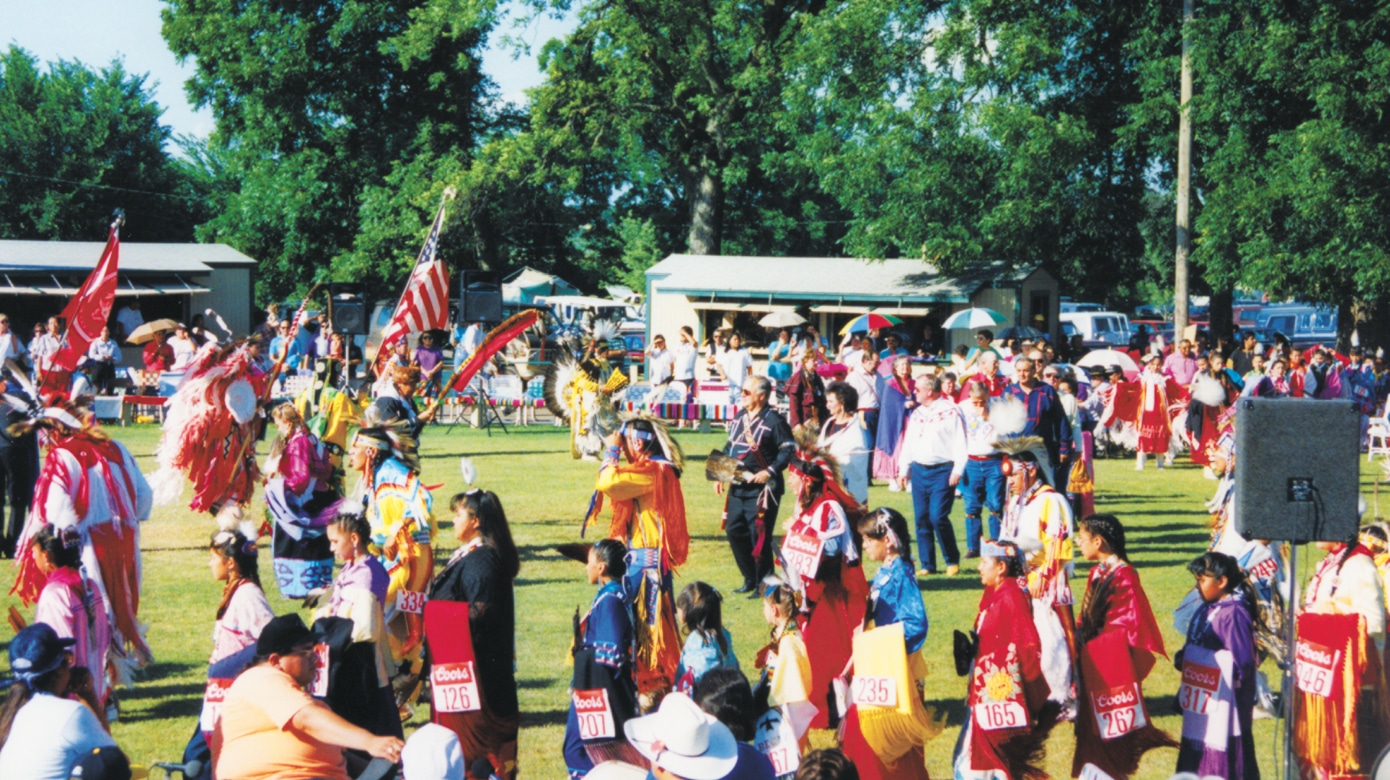 This month, thousands of Citizen Potawatomi will gather on Tribal grounds just south of Shawnee, Oklahoma, to connect with relatives, participate in festivities and games, vote on Tribal business, and engage in cultural learning through language classes, dance lessons, and arts and crafts. The annual Family Reunion Festival is part of a 50-year history of celebrations held at CPN grounds — but the Festival of today looks much different than when it began in 1972.

Before the Family Reunion Festival, the Nation held the Potawatomi Intertribal Powwow each year following the CPN General Council. What began as a celebration of Native culture swiftly rose to preeminence among powwows in the United States. The event boasted large prize offerings and attendance between 5,000-6,000 people a night, with Natives from across the country travelling to participate in the festivities and dance in the competitions.

However, the popularity of the Intertribal Powwow also proved its shortcoming as a means of connecting Potawatomi with each other and with their culture. It required a significant number of resources but with relatively little benefit to Citizen Potawatomi tribal members. Few Citizen Potawatomi participated in the dance competitions, with only one placing in more than 18 categories in 1998.

Vice-Chairman Linda Capps told the Hownikan in 2013, “Our Tribe didn’t have a lot of dancers like others who were coming to compete here. This kind of reinforced itself, resulting in our people not wanting to dance in the competitions.”

Tribal members also reported having difficulty identifying and connecting with other Citizen Potawatomi at the event.

The Business Committee grew concerned that, in all its years, the event had not succeeded in its mission to connect Potawatomi with their culture. Tribal leaders made necessary changes so that the annual festivities could better serve the Nation’s members.

On the Friday night of the 1998 Intertribal Powwow, CPN held an all-Potawatomi powwow. The event was popular with Tribal members, and the following year, CPN announced an entirely new format. The “Nation’s first Heritage Festival,” now called Family Reunion Festival, would “replace the Intertribal Powwow” in June 1999, the Hownikan reported.

Open specifically to CPN tribal members and their families, the new Festival focused on cultivating Potawatomi connections, culture and tradition.

Chairman John “Rocky” Barrett addressed the change in his column in the April 1999 edition of the Hownikan: “I was on the Business Committee when we had our first intertribal powwow back in 1972. The thought at the time was … to get us started in our own traditions — since we had no drums, no singers and no dancers. We were supposed to learn our own ways, after we learned from other tribes, and then teach our own people… Here we are 27 years later, and we have yet to have more than five Citizen Potawatomi competition dancers enter a contest at our own powwow.”

Today, the Saturday evening powwow remains the centerpiece of the event, now with hundreds of Potawatomi dancing. Cultural demonstrations and lessons have also been built up as a core part of the Festival to teach CPN members about their heritage. Classes on ribbon shirt making, beading, language, dancing and more are offered throughout the weekend. General Council also continues as a cornerstone of Festival, where members address important decisions for the benefit of the Tribe.

The first Citizen Potawatomi Heritage Festival received an overwhelming response, with an estimated 2,500-3,000 Tribal members in attendance — more than had ever previously travelled to the Nation’s headquarters.

Honoring several founding families each year with the help of staff from Tribal Rolls and the Cultural Heritage Center remains another key element of the redesigned Family Reunion Festival.

Cultivating familial ties has been central for Tribal leadership from the beginning.

In discussing the inaugural all-Potawatomi Festival, Vice-Chairman Capps noted that “the orientation of the Potawatomi Festival is multi-generational.” Activities and learning opportunities for young Tribal members help to pass Potawatomi traditions on to the next generation.

Chairman Barrett wrote before the 2000 Festival, “the essence of tribe is family. A tribe is a group of interrelated families that share a common language, art, culture, history and territory who grew as an independent community until the need for a government became necessary. The families that make up the modern Citizen Potawatomi Nation share a common destiny as unique as their dual citizenship. Their history and their blood give them their Tribe; their Tribe works for their future security and prosperity. As long as the families survive, the Tribe survives.”

This year, the Tribe gathers together in person for the first time since 2019. Instead of the regular schedule of honored families, Family Reunion Festival will be held in remembrance of all those relatives who have walked on due to COVID-19.