With her attention always on the needs of the Citizen Potawatomi Nation and its members, Margaret Zientek has already hit the ground running as the new Workforce and Social Services department director.

“I feel that we’ve grown, and we continue to grow,” Zientek said. “Some of those achievements that Carol and I have been able to make happen or have been an instrumental part in those changes nationally, are coming to fruition.”

Zientek is ready to meet the challenges that can accompany growth.

Improving how services are delivered

That includes the effort to renegotiate the memorandum of agreement on Public Law 102-477. The federal legislation gives federally recognized tribes “the authority to integrate Federal employment, training and related services that they provide to tribal members,” according to BIA.gov. However, tribal nations did not have an opportunity to provide input on the 2017 memorandum of agreement, resulting in re-implementation of many harmful practices that the tribes had originally sought to fix.

In remarks to the National Congress of American Indians 2021 general assembly, U.S. Vice President Kamala Harris announced tribal governments would have a place at the table during the renegotiation process, the December 2021 Hownikan reported.

“This year, some of the things that we have been fighting for, advocating for and working hard to make happen on a national level are coming to a head,” Zientek said. “We have been advocating and working to get that (MOA) corrected. It’s in the formation stage of how that will happen right now.”

She said the department considers how it can meet various needs from support for veterans, to encouraging safe and healthy families. Tribal workforce leaders like Zientek believe some changes are needed at the federal level.

“Our viewpoint is it’s the same people we’re serving with all of our workforce and social services. Why do I have to manage it separately?” she asked. “I can’t pay (employees) to do other jobs with other federal funds, when in actuality, they’re serving the same set of clients. We believe it makes sense at the Tribe that LIHEAP be included in 477.”

Zientek also identified another area that needs federal changes. When she and her staff noticed more clients with a history of felony convictions, they sought to expand the program.

“They are a client that needs an intensive service. They need more help to get on their feet and get jobs. We’re one of the few tribes in the nation that modeled our reentry connected to getting a job,” she said. “We expanded it, and we successfully received that grant within 477. We will be advocating it stays in 477 for us.”

Zientek also works to ensure the programs her department offers are ready to respond to the changing employment market in Oklahoma. Oklahoma’s growing cannabis industry has impacted some traditional service markets, such as retail and food service. People who are reluctant to work in those roles are rethinking their options, she said.

“I’m hoping to find more people willing to get that retraining or get their foot in their door at this great, wonderful new opportunity and to recognize it’s there,” she said. “I hope to help put that in more people’s thoughts, that they can be proud of what they did.”

“This was a community event; it wasn’t just Citizen Potawatomi,” she said.
Partner agencies included the Absentee Shawnee Tribe, Legacy Parenting, the Oklahoma Department of Human Services and others. More than 30 vendors set up booths.

“The people who attended and the agencies who participated are already saying ‘Put me down for next year’ and asking ‘Where are we going to hold it next time?’”

Outside of Workforce and Social Services, one of Zientek’s favorite Tribal programs is the Potawatomi Leadership Program. It was born after Chairman John “Rocky” Barrett and Vice-Chairman Linda Capps thought the Nation could do more to develop the next generation of Potawatomi leaders.

The PLP is held for six weeks in late June, during the Family Reunion Festival. The program selects eight to 10 Tribal members from around the country, bringing them to Shawnee to learn about CPN government, culture and economic development.

The participants stay at the Sharp House, a CPN property close to Tribal headquarters. Zientek jokes that she was not paying attention in a meeting when the need for a PLP housemother was being discussed, and then she was nominated for the position. She has been the housemother for about 15 years.

She said the experience shows participants how the Nation’s government works, how it provides vital services and CPN’s rich history.

“If you’re interested, you can come back and work (here). Take this knowledge back to your family and share it,” she said. “We have legislative meetings across the country. Come to your meeting, come to your regional meeting, but you now know what it is that we do and why we do it. And help us share that.”

She enjoys getting to know all the program participants while they’re in Shawnee and hearing updates from them after they’ve returned home.

“Those kids each year had something unique to speak about it,” she said. “I always enjoy visiting with the youth. I always have learned something new that I didn’t know or experience something.”

With her unique perspective, Zientek is looking forward to serving CPN as it continues its growth and helping youth prepare to lead the Nation in the coming years.
Learn more about Workforce and Social Services at cpn.news/workforce. Read information and apply for the Potawatomi Leadership Program at plp.potawatomi.org. 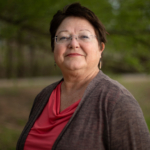