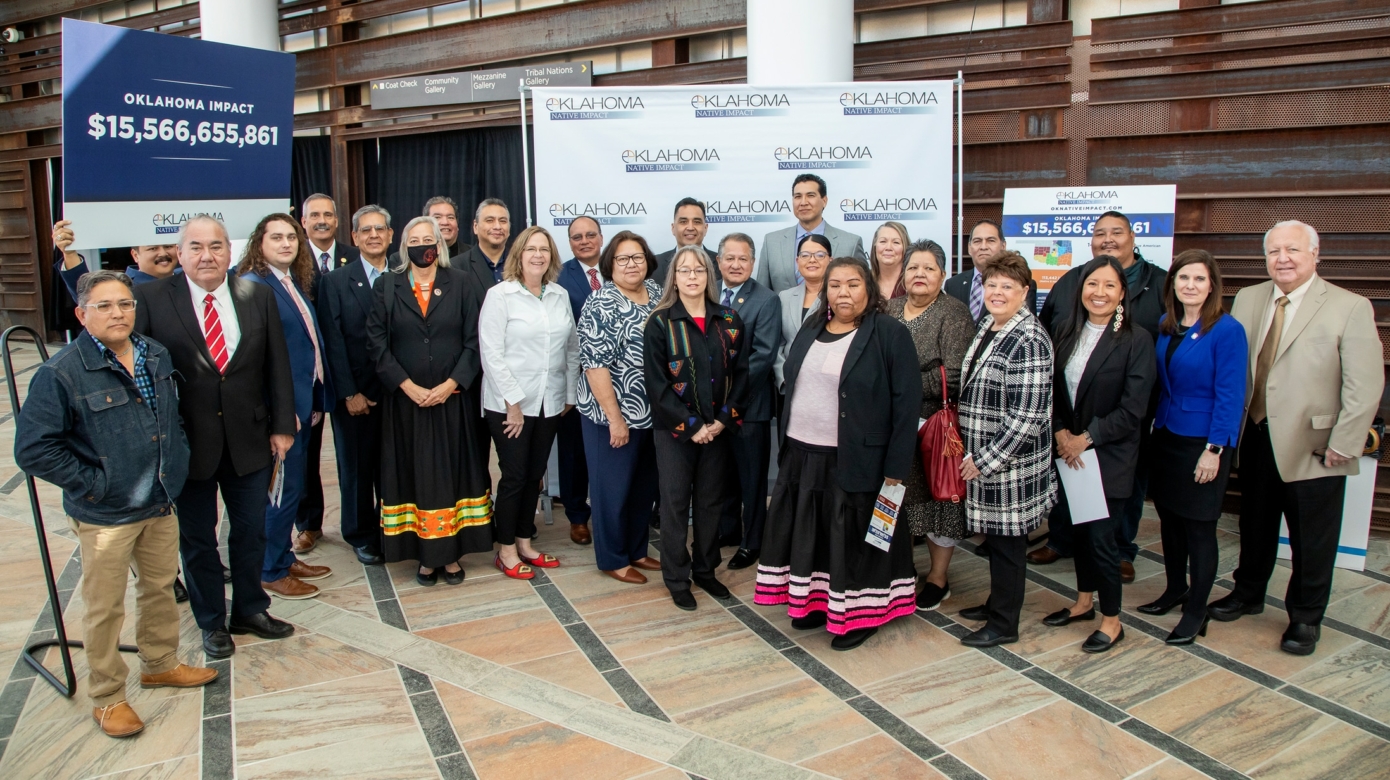 Native American tribes in Oklahoma had a nearly $15.6 billion impact on the state in 2019, according to a new study released in March.

It found that the tribes directly employ more than 54,000 people and support a total of 113,442 jobs for tribal citizens and non-citizens, accounting for more than $5.4 billion in wages and benefits to Oklahoma workers in 2019.

“This study shows just how important tribes are to Oklahoma’s economy,” said Neal McCaleb, Chickasaw Nation Ambassador to the United States. “We are helping create sustainable economies through our many valuable jobs as well as making other substantial and impactful investments into our broader communities. This is our home and we look forward to continued growth — growth that benefits all Oklahomans.”

This study, sponsored through the Oklahoma Tribal Finance Consortium, was released during a press conference at the First Americans Museum in Oklahoma City on Wednesday, March 23. In 2019, the Consortium sponsored a similar study. The new report shows a significant increase of more than $2.6 billion in economic activity between fiscal years 2017 and 2019.

“Tribes are economic drivers as well as constant and reliable partners,” said Victor Flores, President, Oklahoma Tribal Finance Consortium and Director of Tribal Services, REDW, LLC. “Unlike corporations that move based on economic conditions, our tribes are here to stay,” he said. “Oklahoma is home, and we will continue to reinvest in our communities through job creation, critical service delivery and infrastructure development. Oklahoma is stronger when we all work together.”

“I’m very proud of the economic impact number in the state of Oklahoma,” said Tribal Chairman John “Rocky” Barrett. “What magnifies that is the fact that these Tribal governments are mostly rural and we can’t leave. It’s fairly easy to make money in Oklahoma City and Tulsa, it’s real hard to make money in rural Oklahoma. So, the impact those dollars have in the rural parts of our state keeps the economy alive.”

One of the most impactful contributions by the 38 federally recognized tribes has been in health care, particularly in rural and underserved Oklahoma communities. Tribal health care operates more than 45 facilities, providing care in most locations to both Native American and non-Native Oklahomans.

When health care is provided to Native Americans at tribal health facilities, the entire cost of care is paid by the federal government, resulting in savings to the state. In 2019, tribes paid $232 million in Medicaid expenditures, saving the state $86 million by requiring no state matching funds.

Through gaming compacts between Oklahoma-based tribes and the state, tribal nations submit a percentage of their Class III gaming revenues for the exclusive right to operate casinos in the state. Oklahoma sends the first $250,000 of these fees to the Oklahoma Department of Mental Health and Substance Abuse Services. Of the remaining funds, 88 percent is earmarked for public education supporting all Oklahomans.

The tribes have invested heavily to support local communities and efforts. Oklahoma tribes have paid more than $1.8 billion in exclusivity fees since 2006. More than $1.5 billion has been earmarked for public education. In 2019, Native nations paid an additional $84 million to support Oklahoma schools, municipalities and other community initiatives.

“It is impossible to overstate the positive impact Oklahoma’s tribal nations have had, and continue to have, on our state,” said Matthew L. Morgan, Chairman, Oklahoma Indian Gaming Association. “Through our gaming industry, we employ more than 75,000 people, mostly in rural communities. We build roads and hospitals, invest in our public schools and universities and create programs to serve those who need assistance,” he said. “We are proud of our past, excited about things happening right now, and determined to leave the next generation an industry — and an Oklahoma — that they can take pride in.”

Kyle Dean, associate professor of economics and director of the Center for Native American and Urban Studies at Oklahoma City University, analyzed data from 16 tribal Nations based in Oklahoma and prepared the study.

The Oklahoma Tribal Finance Consortium’s mission is to advance tribal economics and strengthen tribal finance within the state of Oklahoma.

More information can be found at oknativeimpact.com.