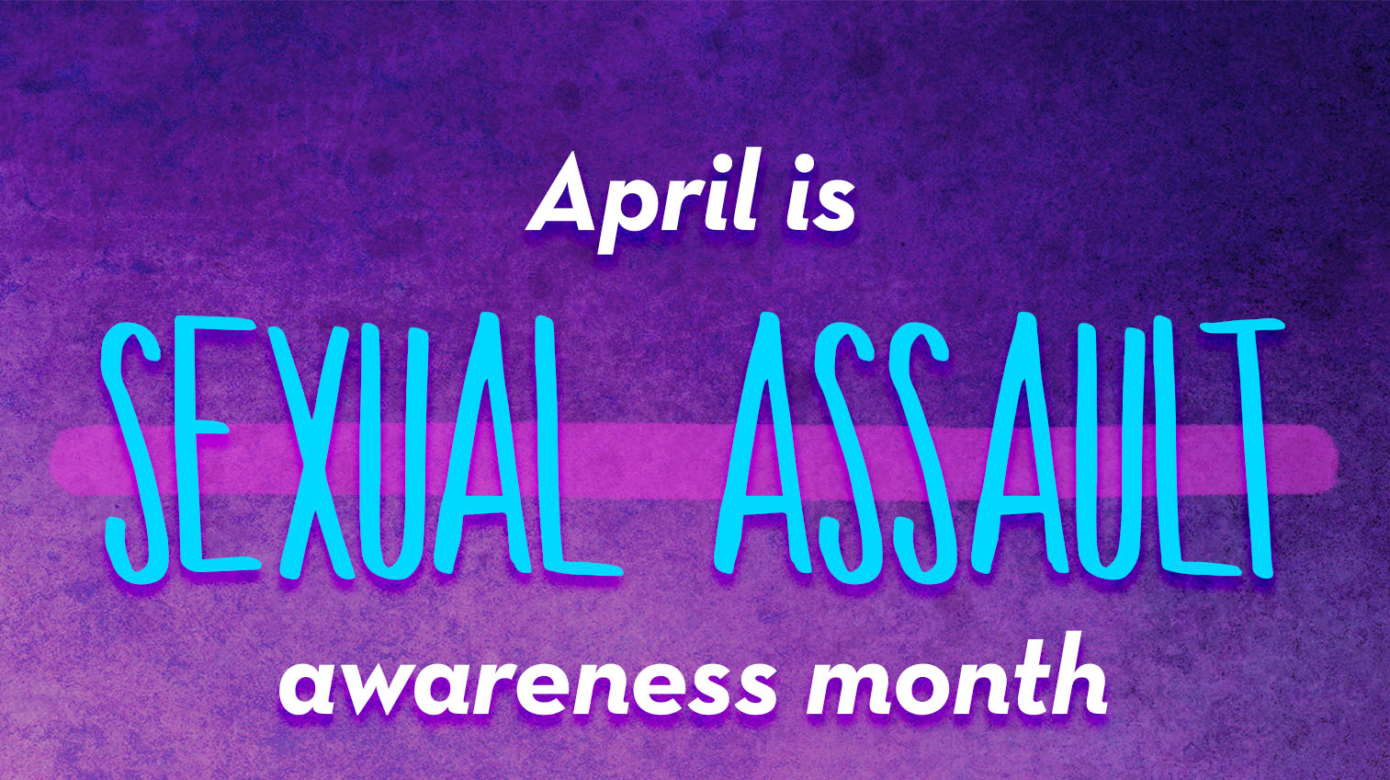 This April marks the 21st nationally recognized Sexual Assault Awareness Month, building on many years of advocacy that has impacted community awareness, support services for assault survivors, and state and federal policy. Kayla Woody, prevention and education specialist at CPN’s House of Hope, sat down with the Hownikan to talk about the importance of SAAM, ongoing advocacy and education.

Since the 1970s, advocates have been working to bring conversations about sexual violence out into the open, and pressing for increased awareness and support for survivors. In 1993, this advocacy lead to the passage of the Violence Against Women Act.

“This was a huge step for those advocates and for survivors,” Woody said. “It included provisions for rape and for battering that really focused on prevention. And it also provided a lot more funding for victims’ services. It funded organizations just like ours to be able to really help survivors.”

Advocacy groups dedicated the month of April to raising awareness and support for several years before the first nationally recognized SAAM in 2001. Since then, SAAM has continued to educate and engage the public in addressing what the Centers for Disease Control and Prevention calls “a serious public health problem in the United States.”

Each person has the inherent right to decide if, how, when and with whom they engage in sexual activity. Consent is an agreement between participants to engage in sexual activity, and any sexual contact, physical or verbal, made against a person’s will and without their consent constitutes sexual assault, according to the National Sexual Violence Resource Center. Consent must be freely given and clear, Woody explained; it can also be revoked at any time, including during sexual activity.
Neither intimate partner status, including marriage, nor prior consensual sexual activity nullify a person’s right to make decisions about their own body, or the necessity of obtaining clear and freely given consent. People who are underage, incapacitated by drugs or alcohol, or asleep or unconscious cannot give consent. Consent cannot be obtained by force, coercion or manipulation.
Woody emphasized that sexual assault takes many forms. Anyone, regardless of gender, sexual orientation, race or age can experience or perpetrate sexual assault.

Statistics from the Rape, Abuse and Incest National Network show that every 68 seconds, an American is sexually assaulted. More than one in three women and one in four men experience sexual violence in their lifetime, according to the CDC. That number increases significantly for Native Americans, who are at the greatest risk of sexual violence and experience rape at more than twice the rate of any other race.

As few as one in five victims report their sexual assault, according to the global Start By Believing campaign from the nonprofit End Violence Against Women International. Native women in particular are unlikely to report sexual assault. Woody explained that this is due to a number of factors, including culture and taboo, but also loopholes in the legal system which has made assaults against Native Americans much more difficult to prosecute.

Forty-one percent of sexual assaults against Native Americans are committed by a stranger, compared to only 19.5 percent throughout the general population, according to RAINN. Tribal courts have long lacked jurisdiction to prosecute non-Native offenders in these cases, and a 2010 Government Accountability Office report shows that the FBI and U.S. Attorney’s Office denied two-thirds of the cases passed on to them.

“We’ve got to really start making changes in legislation to hold these perpetrators accountable,” Woody said. “And I feel like once our Native women can see that their crimes are taken seriously and they’re being prosecuted, then more and more will start standing up and coming forward. And we can start making a dent in this issue and really trying to prevent it from happening.”

The Biden administration signed the Violence Against Women Act Reauthorization Act (2022) on March 16, reauthorizing the legislation for the first time since it lapsed four years ago. The reauthorization also includes several updates to the legislation as well as a significant win for Indian Country: tribal courts will now be able to prosecute non-Natives in cases of sexual assault, child abuse and sex trafficking.

The provisions under the VAWA reauthorization are not a complete solution to violence against Native people but are a major step in empowering tribes to protect their people. Woody is excited to see the reauthorization and the new changes to the legislation.

“Allowing Tribes to hold perpetrators accountable, I believe, is a big step in helping to stop this violence from happening. I know that it will not happen overnight, but it is definitely a step in the right direction,” she said.

For Woody, education plays a key role in interrupting cycles of violence and creating safer communities. She said that a lot of people usually have a narrow understanding of sexual assault, often driven by media depictions, but understanding the full scope and impact plays an essential part in raising awareness and increasing safety and support.

Woody emphasized the importance of education for youth, who experience sexual violence at higher rates. It is essential that they have information about healthy relationships and sexual practices, bodily autonomy, boundaries and consent as well as resources available to them in the case that they, or someone they know, experiences sexual violence.

Small actions such as sharing infographics on social media or reading and passing along information about sexual assault’s impact on local communities hold enormous potential to raise awareness and increase safety, Woody said.

Other critical actions include fighting for tougher legislation and holding legal systems accountable. While the Violence Against Women Act shows legislative progress, Woody believes there is always room for improvement.

Finally, she said creating safe spaces for survivors of sexual assault to share their stories remains essential. This means a personal and collective commitment to believe survivors and not to victim-blame.

“It takes extreme courage to come out and tell someone that you’ve been sexually assaulted,” Woody said. “I think the most important thing we can do in our communities is really encourage (survivors) to speak up and let them know that their voice is important and that we believe them.”

Sexual assault, Woody said, is one of the only crimes that victims often blame themselves for. Not believing sexual assault survivors when they disclose their experience and blaming them for the violence committed against them exacerbates the issue. The freedom to speak openly and honestly about their experiences is a critical element to the healing process as well as addressing sexual violence at the community level.

The House of Hope is partnering with the YWCA of Oklahoma City to offer a series of training sessions for nursing students throughout Pottawatomie County, encouraging them to pursue certification as a Sexual Assault Nurse Examiner.
HOH will also place informational signs at local businesses to raise awareness about sexual assault and its impact, as well as share important information and statistics through a social media awareness campaign during the month of April.

Throughout the year, House of Hope offers emergency shelter, crisis intervention, assistance with protective orders, court advocacy, safety planning, and mental health and counseling services. These services are available to all individuals, Native and non-Native, who are experiencing sexual assault, domestic violence, and/or stalking and who reside in Citizen Potawatomi Nation tribal jurisdiction and neighboring communities.

Woody urges readers to take care during this month of advocacy and awareness. Step away from news and media when necessary, lean on community supports and loved ones, and consider seeking counseling if you are able.

“I just want to encourage anyone who’s had to experience sexual assault to know that you’re not alone. We’re here to support you. We’re here to help you with that. There are so many other people in the community who have experienced the same thing, and given the opportunity, would also support you,” she said.

And for those who “may not know what sexual assault is or may not have a good understanding,” Woody encourages them to utilize the resources at cpnhouseofhope.com.

“I feel like the more knowledge we can have, the better we can assist someone who may have experienced (sexual assault). And knowing the statistics, there’s a pretty good chance that you know at least one person who’s gone through it,” she said.

The House of Hope crisis line is open 24/7 at 405-878-4673, and the National Domestic Violence Hotline can be reached at 800-787-3244. A directory of Tribal programs in the state of Oklahoma can be found through the Oklahoma Native Alliance Against Violence at oknaav.org, and a directory of national resources is available on the House of Hope website at cpnhouseofhope.com. Read more about the Violence Against Women Act Reauthorization Act (2022) at cpn.news/vawa. 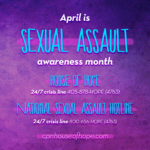 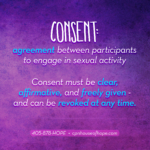 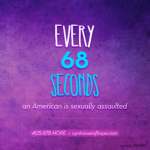 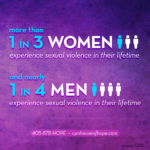 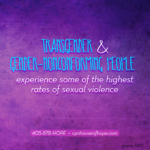 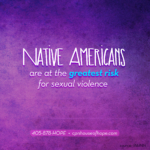 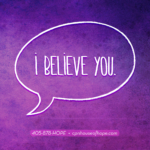 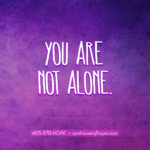 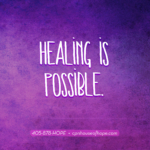