While most families spend evenings watching TV, playing games or winding down, the Seimears family heads off to the BMX track to hone their skills. Tucker, 13, and Jagger, 9, compete on Team C.O.B. coached by National BMX Hall of Fame Inductee Turnell Henry. Although the two brothers are young, the Denton descendants have accomplished tremendous cycling feats throughout their careers.

“It makes my momma heart really proud because when you see the age they are and how dedicated they are to the sport and how much effort they put into it. It just makes you proud,” said Jet Seimears, Tucker and Jagger’s mother.

Tucker began competing when he was 6 and Jagger at just 2 years old.

“They were both very, very young, but this one was even younger,” Jet said, pointing to Jagger. “He was racing on pedals and was still in pullups.”

Jet’s husband Michael is a BMX athlete himself. Knowing how much he has enjoyed the sport throughout the years, he began teaching his sons as toddlers how to balance and ride. Tucker and Jagger have never looked back. They have both achieved expert status, with the next step of becoming professionals.

“We pretty much eat, sleep and breathe each other,” Jet said and laughed. “We get tons of family time. The minute dad comes home, we’re at the track — all of us together.”

Some nights include simply working on jumps and riding, while others include more specialized instruction with professional BMX athletic clinics. Several tracks exist around the Seimears home in Las Vegas, Nevada, which provide the brothers opportunities to train on a variety of environments.

“We try to keep them on all the different types of materials because if you just focus on one material, you’ll notice your kid will lose the skill on the other types,” she explained.

Homeschooling allows Jet to structure lesson plans specific for each son, and it provides a greater opportunity for traveling for local, state and national competitions.

“I think they’ve been to more states than I have now,” Jet said. “And that says a lot because my mom and dad were in the Navy.”

The shiny, numerous accolades lining a room in the Seimears’ house provide a visual representation of the boys’ accomplishments, but Jet stressed the most important are not always physically visible.

“Through the years, it has taught them sportsmanship and to be OK with not always being on the top,” Jet said.

“And especially this aggressive sport … because it’s racing, everybody wants to be the No. 1. … It has taught them to be a good sport.”

Jagger and Tucker always congratulate other riders and strive to have positive attitudes, regardless of their placements.

“It’s a good life-learning experience for them. I’m grateful that they have learned that and learned it at a younger age,” Jet explained.

Throughout the season, Tucker and Jagger accumulate points from each competition. They then attend a final tournament known as the USA-BMX Grand Nationals held in Tulsa over Thanksgiving weekend every fall. Thousands of riders participate, and the points help decide qualifying round placements, which occur over several days.

“You never know what to expect because they are competing against the whole world,” Jet said.

Tucker and Jagger look forward to the opportunity to let their skills shine bright during this year’s final competition later this month and are already busy preparing for the 2022 season.

“To see the smiles and their faces light up when they work so hard for something and then they accomplish it and do amazing, that is just priceless,” she said.

Learn more about BMX and keep up with the Seimears’ standings at usabmx.com. 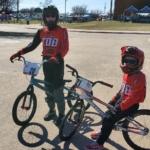