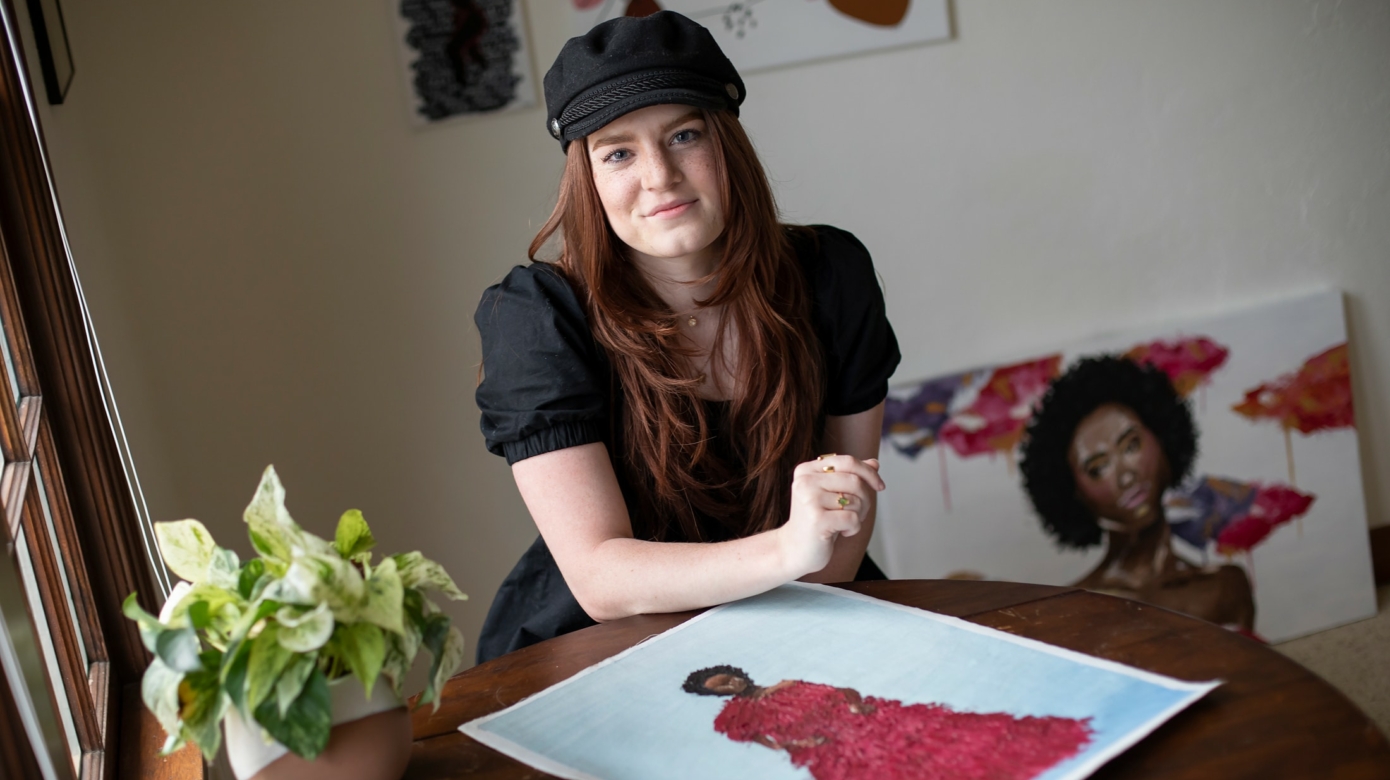 Laurel Wilson turns a childhood artistic talent into a career as an artist.

Oklahoma City-based artist and Melot family descendant Laurel Wilson tries anything and everything in her work. She spent her time as an undergraduate at John Brown University in Siloam Springs, Arkansas, exploring.

“I learned everything from printmaking, screen printing. I took some graphic design courses. They just weren’t my thing. (I) did a lot of figure drawing, oil pastels, oil paints, watercolors, charcoal, the works, all of that,” she said.

Wilson showed artistic talent as a child. As a sixth-grader, she entered the Oklahoma Student Art Exhibition of the 2009 Oklahoma State Fair after taking her first art classes. Her pen and ink landscape won first place, best in show and grand champion in her division.

“That was my first time I entered it, and I was like, ‘I’m doing great,’” Wilson said and laughed.

She continued to enter pieces and win prizes in the same show throughout her adolescence. Now with her bachelor’s in fine arts, she focuses on studio art and creating gallery shows. Wilson joined Art Group OKC in 2020, a collective of young artists who collaborate and provide a community for one another. However, the pandemic hindered its momentum.

“We haven’t really gotten to work together a whole lot, which is really unfortunate,” she said. “But hopefully, later this year, I’ll be able to actually create more things to showcase.”

Wilson’s passion for art remains high, and she still enjoys connecting with others through showing her inner self.

“As someone who’s had depression and all of that, art was my form of getting it out and also being able to hope that people would be able to see my art and be like, ‘I’m not alone in this, and I can understand that you understand how I’m feeling.’ And that was huge for me,” she said.

Artists define themselves by their style, and Wilson found it difficult to develop hers during college.

“That is such a huge thing that (professors) ingrain in you, and I couldn’t grasp it because I wanted to try everything. And, I feel like I don’t really have a niche like that,” she said.

Wilson’s friends and other artists helped her realize symbolism is at the forefront of her work. Some of her pieces discuss and display her thoughts on feminism and mental health.

“I can’t just sit there and paint pretty things, which is great if people can. But I don’t get … enjoyment from just like painting a landscape scene, which I’ve done before, but it just doesn’t resonate,” Wilson said.

In one series, she correlated emotions with specific colors to release her pent-up feelings. Family members and friends volunteered to sit for portraits, and Wilson painted their faces with matching backgrounds.

Wilson eventually expanded the series into an immersive show with various textures and artistic styles, which she always enjoys combining in new ways.

“It feels like you would just be stagnant if you’re not constantly moving forward, which I would assume would be keeping my mind open, at least for me personally. So I definitely think that’s a very crucial part of my artwork and how I grow,” Wilson said.

Movies, music and even cosplay provide inspiration and motivation to branch out.

“If I feel more whimsical or romantic, Pride and Prejudice is always going to be on. … And Mamma Mia also is a great one, the original one, because it’s superior. The colors in that film are just gorgeous and raw and natural, and I absolutely love it,” she said.

Wilson also makes musical playlists to direct her thinking and spike her creativity. She often listens to Taylor Swift, A Fine Frenzy and Fleurie, depending on her mood.

“I like a few of (Fleurie’s) songs because they’re very whimsical,” Wilson said. “That’s the best way I can describe it, where it just feels like you’re flowing. So that makes me feel like I want to flow with my art.”

Making cosplay outfits — real-life replicas of clothes and make-up of TV, movie and comic book characters —has become another passion. Wilson used much of the pandemic to reassess her artistic desires. For one of her main projects, she handmade a head-to-toe Wonder Woman costume.

“I learned so much doing that,” she said. “And then being able to create more art and just doing whatever I felt like instead of doing things because I was commissioned to do it, which is great. I love that. But that was really a good break time for me to be like, ‘I’m going to do what I want to do right now.’”

Wilson encourages everyone to support their local artists, especially throughout the pandemic when many art studios floundered, and freelance workers struggled.

“I feel like art tends to stick around and changes a lot of our world,” she said. “And art is everywhere you look.”