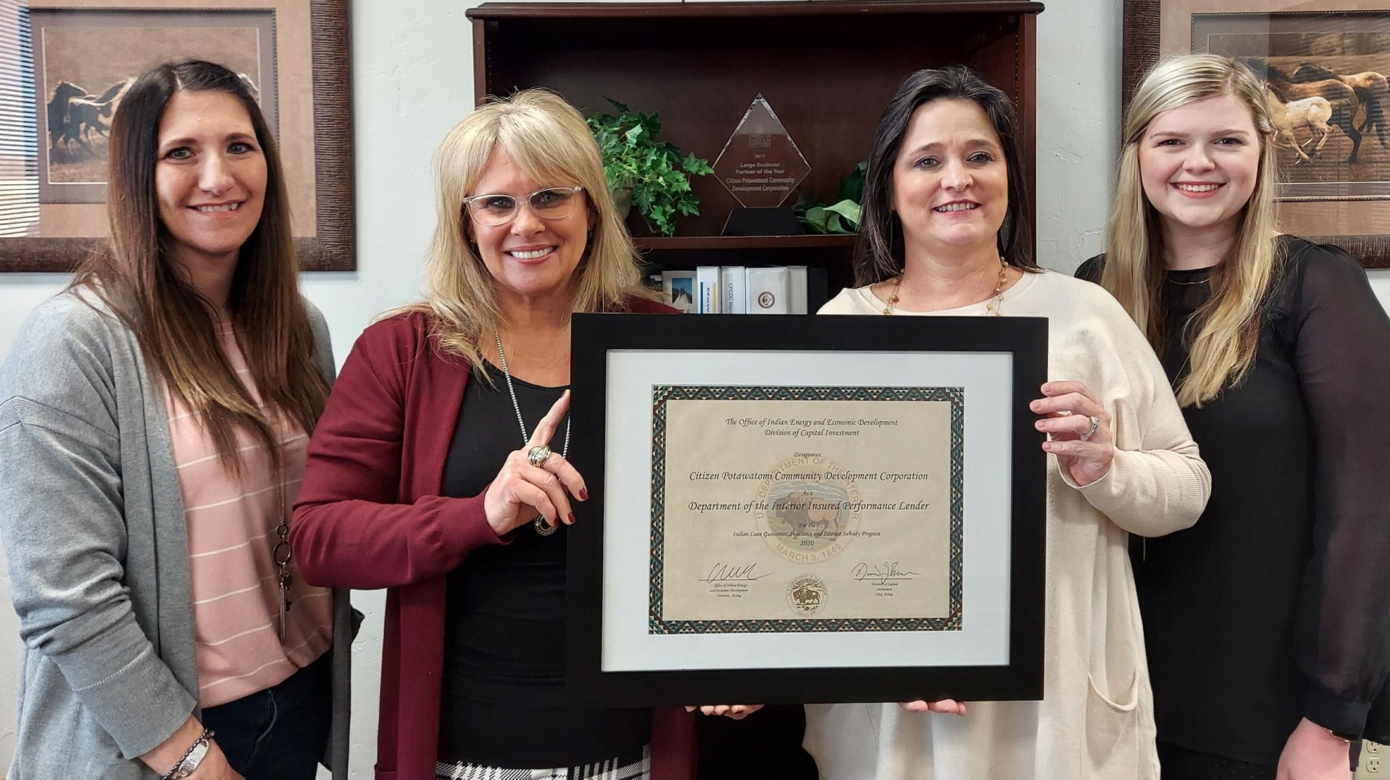 he Citizen Potawatomi Community Development Corporation adds to their list of achievements with the Office of Indian Energy and Economic Development’s Interior Insured Performance Lender.

The Office of Indian Energy and Economic Development Division of Capital Investment named the Citizen Potawatomi Community Development Corporation an Interior Insured Performance Lender.
A division of the U.S. Department of Interior, the OIEE recognized the CPCDC as the only Native community development financial institution with the title in the 2019-2020 fiscal year.

“Being a performance lender really sets high expectations for the CPCDC,” said CEO Cindy Logsdon. “It shows that we’re active in Indian Country and in lending, which sets us apart as being one of the largest non-Native, non-bank Native CDFIs in the nation. So it means that we perform at a high level, and that’s quite an honor.”

The distinction comes as a “recognition of their commitment” to the Indian Loan Guarantee and Insurance Program, designed to help institutions such as the CPCDC provide low-interest rates.

The CPCDC began using the program in 2008; however, the OIEE named it an Insured Performance Lender for the first time last fall. The Tribe’s CDFI believes in the program’s purpose as it expands its ability to provide funds to Native entrepreneurs and small businesses.

“It’s very underutilized throughout the Nation, and there’s many more dollars set aside for this insurance product than that gets utilized. And because we are able to utilize it annually, I think that’s why the (Bureau of Indian Affairs) wanted to recognize us as an insured performance lender,” she said.

The program also helps the CPCDC keep their delinquency rates under 1 percent.

“We are in the business of taking a little more risk than a bank typically would,” Logsdon said. “And even whenever collateral is shy, or maybe experience or having skin to put in the game, we’re able to place insurance and have that 90 percent guarantee. So, you know, we’re able to do a deal when we otherwise probably wouldn’t touch it.”

The CPCDC closes more loans annually than most Native CDFIs in the U.S. with the help of the Indian Loan Guarantee and Insurance Program, and Logsdon enjoys leading a financial institution that puts capital into Indigenous businesses.

“I’m very proud of the fact that, like last year, we closed about $12 million in loans. That’s during a pandemic. That is something to be said that we were serving Native Americans at a time that was so uncertain. And it’s an honor and a privilege to be recognized on a national level,” she said.

The CPCDC discusses it as one of many options with clients to help them achieve their goals and dreams.

“We utilize this program in the sense that whenever you get to the point that those weaknesses are kind of filled in, we can add this as an added accompaniment. And it may be a process, but … our doors are open. Give us a call. You just want to talk about a deal? We’re here as a resource,” Logsdon said.

Find the Citizen Potawatomi Community Development Corporation online at cpcdc.org or on Facebook at @CPNCDFI.