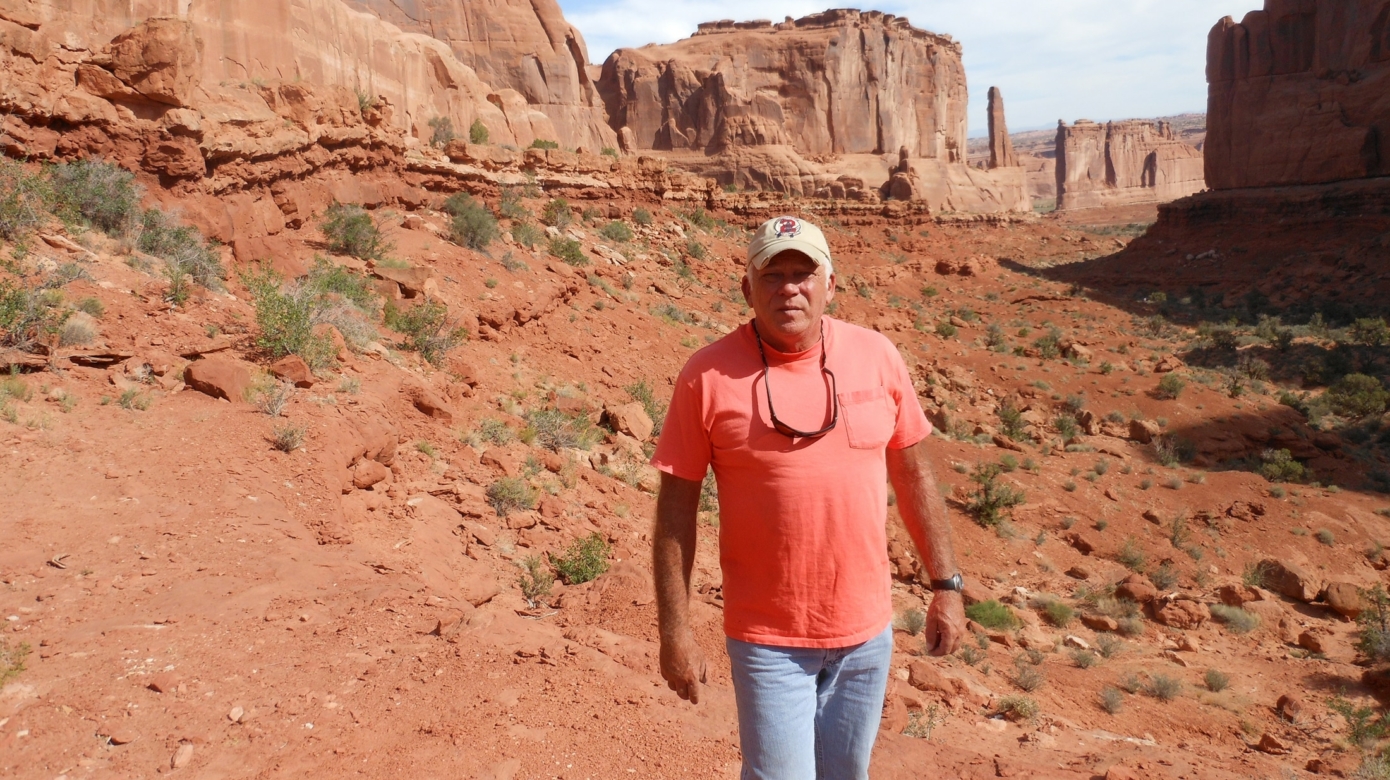 District 11 Legislator Andrew Walters enjoy exploring every corner of the earth, from hiking in Red Rock Canyon in Utah to sailing in the Virgin Islands. (Photo provided)

Bourbonnais family descendant Andrew Walters took office as Citizen Potawatomi Nation’s District 11 legislator in February 2021. Since then, he has attended all legislative meetings and voted on funding resolutions and citizenship applications. Walters also submits columns to the Hownikan each month, which often tell life stories of his career and travels.

Walters’ father served in the Army, and the family moved many times throughout his youth. While he was born in Texas, he spent three years in Japan as an infant.

During a recent Hownikan interview, Walters described his mother as “the epitome of Potawatomi.”

“She taught us customs and ways but in a very subtle way. … It wasn’t divided up between this way and that way. It was just our way. That’s how our family was. So I’ve always been able to keep those memories and keep those lessons and photographs and talking to other family members,” he said.

Walters’ great-great-grandmother Mary Anderson Bourbonnais helped establish the Tribe in what is today known as Oklahoma. The Bourbonnais were one of the first four Potawatomi families who moved from Kansas to Indian Territory in 1872. Mary and husband Antoine later bought the Bourbonnais Cabin. It still stands near the Citizen Potawatomi Nation’s Cultural Heritage Center, and Walters enjoys the front porch as a place of respite.

He makes it a point to vote in CPN elections and attend Tribal events, including Family Reunion Festival, whenever possible.

Walters’ wife, Cora, has felt a connection with Potawatomi culture throughout their relationship. CPN District Judge Phillip Lujan married them on Tribal land 15 years ago. Walters tries to keep his nine children and 14 grandchildren interested and engaged in Tribal customs as well, despite living across the country from each other.

After he and his wife retired, they decided to move to Shawnee, Oklahoma, to live closer to the Nation.

“I wanted to do something (for the Tribe) that I felt I had experience in and something that I could contribute for,” he said. “And being a legislator is what we moved up here for. And so when I got to do it, I jumped on it with both feet.”

Walters began his 47-year career in law enforcement as a dispatcher and spent most of his time with the City of Oak Ridge North Police Department in Texas. Since 1988, he held the titles of officer, investigator and lieutenant. He retired in 2019 with two decades as the chief of police.

“One of the things I would always tell my officers was that you treat people — doesn’t matter who they are, complete strangers — like they’re your own brother and sister until they prove that they don’t deserve that degree of respect,” Walters said.

He describes himself as thick-skinned and tenacious, with the ability to understand multiple sides of a situation. He organized emergency management during historic hurricanes and investigated a full range of crimes, from petty theft to homicides and cases of corruption by city officials throughout his career. However, Walters sees his time in law enforcement as thousands of individual instances he made an effort to help those around him.

“I believe in the mission of law enforcement, and I believe in doing the right thing. And I think that’s something I’m bringing to the legislature with me. I’m always going to do the right, legal and ethical thing,” he said.

“I think the management end of it, the last 20 years of my career, probably did more to prepare me for (being a legislator) than anything else did. Not saying the other duties didn’t because it humbles you to be a police officer at times,” Walters said.

The Bahamas, Scotland, Mexico, the Caribbean, London, Ecuador, Peru and Spain are only a few places Walter and his wife have lived and vacationed. Their love for traveling falls alongside their desire to learn about other cultures and appreciation for Mother Earth. They pack up their camper and move throughout the country a couple of times a month, and Walters lists Colorado, New Mexico, Wyoming and Montana among his favorite places in the U.S.

“Every place has its beauty,” he said. “You just have to be open-minded enough to really see it and to appreciate it. I always think that’s why God made more than one flavor of ice cream. You may have a favorite, but you taste the other ones just to make sure that one’s still your favorite.”

The beach, mountains and desert all hold their appeal, but for Walters, the fewer the people, the better.

The two also sail, mostly navigating through the Florida Keys, and the British and American Virgin Islands. Walters took lessons in Houston more than two decades ago and earned his certification.

“There is something deeply spiritual about a sailboat. When you get the sails up and you turn across the wind, the sail pops over, and you feel that little lurch, it’s like you’ve given it birth. Like, it’s a living entity. It shakes, it shivers, if you listen, it even speaks to you. My favorite quote is, ‘A ship in harbor is safe, but that’s not what ships were made for,’” Walters said.

He often brings his guitar with him on their travels, and playing music remains one of his favorite means of self-expression. His instrument collection includes guitars, a banjo, keyboards, an accordion, flutes, an autoharp and more. Walters enjoys Celtic music in particular and even took bagpipe lessons.

“It’s just a good release. I think everybody should try to sing or play an instrument or do something to kind of bring that inner self out,” he said.

Since Walters assumed office in February, his position as a CPN legislator now sits at the top of his list of passions.

He encourages Tribal members to contact him with ideas and comments and participate as much as possible.

“It’s what’s inside your heart that makes you Native American. And it doesn’t have to be some overt celebratory act with a big sign over your head that says, ‘I’m Native American.’ It has to be how you act, what’s in your heart. What do you care about?”

Email District 11 Legislator Andrew Walters at andrew.walters@potawatomi.org. Read more about him at cpn.news/walters.