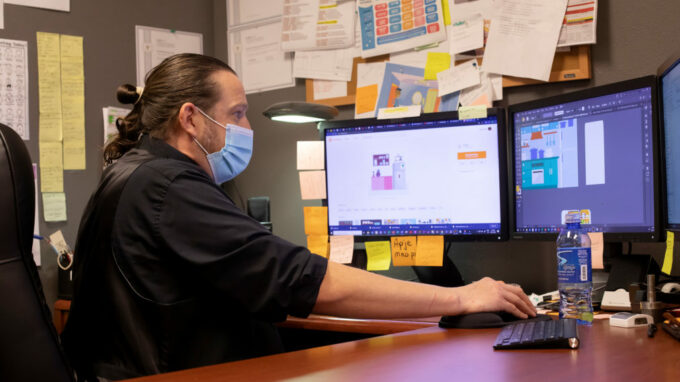 The United States Department of Interior’s Office of Indian Energy and Economic Development awarded $3 million as part of its Living Languages Grant Program. Eighteen tribes across the country received funding, including approximately $200,000 to the Citizen Potawatomi Nation, which will extend its language learning resources.

“We got the top amount awarded, which is pretty exciting,” said CPN Language Department Director Justin Neely. “So, it’ll help fund the department as a whole, and it’ll help fund staff to create these books. … We have a pretty talented crew right now of folks, which I’m really pleased by.”

They now have $200,066 to begin writing Potawatomi children’s books. The one-year grant will assist in the creation and publication of two series for use and distribution in the CPN Child Development Center classrooms and beyond. Staff teach infants through fifth graders in the daycare and after school programs.

“I think that when it comes to kids, I mean, they’re obviously our next generation of speakers. If you can get to kids early on and really light that fire, light that desire, to have more of an interest in our culture and our language, it’s definitely something that’s going to carry them through in life,” Neely said.

Language staff plans to write 12 books, six for infants to 3-year-olds and six for 4 to 6-year-olds. While the characters and storylines remain up in the air, Neely believes in the department’s talent and abilities. Their ideas include large easel pieces, a series based around specific characters and ones that focus on vocabulary sets. The funds will allow them to purchase materials able to withstand time and frequent use.

“This particular crew is very creative and good with art and creating content, videos as well. And I think that because of the nature of this crew that I have, (this project) has become a possibility. I don’t think it’s something that I would have necessarily tried to do seven years ago or five years ago just because we didn’t really have the right people in place to make it happen. The timing is right now,” he said.

While the department has focused on digital content and online learning tools, books remain unchartered territory. Neely recognizes the importance of having reading materials available for schools and families, which meets the grant’s requirement of awarding a program that “would revitalize the language by preventing intergenerational disruption.”

“It’s nice to be able to have that physical (piece), where a parent can have a book that they can sit down, and they can read to their kid in the language as they’re learning it, as their kid’s learning it with them,” he said.

But Neely said learning the language serves a larger purpose.

“I think it has a positive impact on Indian communities,” he said. “It helps with societal problems. Having that sense of identity helps with things like domestic violence, drug use. There are so many things that having a sense of roots and cultural connections can really help within Native communities.”

The grant lasts through the end of November, and the department hopes to distribute the books through the CDC and to additional families at no cost after design and publication.

“I’m a big advocate of giving the language away, if at all possible, especially to our Tribal members,” Neely said. “It’s our language, and … it’s nice to be able to give those or make those available.”

Learn more about the language department and online tools at potawatomiheritage.com. Visit the Potawatomi Gifts for other books, craft supplies and cultural art at potawatomigifts.com.