Each summer, Citizen Potawatomi Nation’s Potawatomi Leadership Program culminates with project presentations. The PLP counselors paired the class of 2018 together early in the six-week internship, and the participants then began thinking of ways to expand the Nation’s economic, cultural or governmental scope while integrating their interests.

After discussing their ideas with their mentors, the students researched how to bring their projects to life. That involved meetings with several departments across the Tribe to pick employees’ brains about logistics, budgeting and more.

Selah Bellscheidt and William McCurley focused on something accessible to Tribal members across the country.

“Coming from Washington State, I have felt disconnected from the Nation because of my lack of proximity to Oklahoma,” Bellscheidt said. “I knew I wanted to help so that other Tribal citizens wouldn’t feel the same way.” 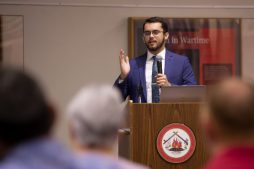 They decided to highlight the redesigned CPN Cultural Heritage Center. They initially wanted to create a virtual tour of the museum; however, CHC staff already set those plans for the future. Bellscheidt and McCurley jumped at the opportunity to market it and created the CPN CHC’s National Museum Day to kick off the virtual tour.

The duo suggested Tribal legislators and PLP alumni work together to hold group virtual tours at district meetings across the United States. Plans included providing a corresponding script with supplementary facts for PLP alum to read throughout the tour.

Bellscheidt and McCurley also developed an advertising plan utilizing Hownikan ads, social media and graphics for the museum’s website, potawatomiheritage.com. Promotion included generating use of the hashtag #TouringTogether as well as sending buttons with the saying as gifts for attendees. They chose to hold the event in September to honor the Potawatomi forcibly removed on the Trail of Death.

“We became separated from our people along the way, splitting our Tribe apart. This was a horrible event in our people’s history,” McCurley said. “Through these gatherings, we hope to bring our people together once again, if even for one day.”

Gabriella Gombas and Trae Trousdale proposed and designed a cultural and public gathering space near CPN headquarters — Mshiké (Turtle) Park. They named the area after a Potawatomi origin story in which the Creator built the world on a turtle’s back. Gombas focused on the park’s characteristics representing Nishnabe traditions and history, while Trousdale developed the park’s logistics and potential economic impact.

“The park will have many cultural aspects that highlight the relationship between nature and the Potawatomi people,” Gombas said. “Many features in the park honor and contribute to the Nation.”

Those features included a one-mile Trail of Death Memorial walking path complete with signage, native plant species, memorial markers and more; an amphitheater for CPN use and rental; and a stickball field.

“Throughout our time in the PLP, Gabby and I have both witnessed firsthand the workforce development that the Nation provides, but we thought we could take it one step further,” Trousdale said. “New businesses and budding families flock to areas that have a sense of community, character, public amenities and a desirable lifestyle.”

They provided research showing the park’s potential increase to home and land value, community health, and the FireLake complex’s reputation as a visitor destination. They also gave information on applicable grants covering the approximate $500,000 construction cost.

Andrew Hudson and Nathan Valdez combined their majors of industrial engineering and architecture for their project. They designed a family-friendly addition to the Grand Casino Hotel & Resort, which could extend the Nation’s economic impact and accommodation appeal.

“We had heard someone say casually that there were not many places for kids, and the lack of a water-based environment for the hot weather surely did not help,” Valdez said. “We also had heard of the struggle that goes into finding a hotel close enough to the FireLake area … when visitors come to play baseball at the fields next to the FireLake Casino.” 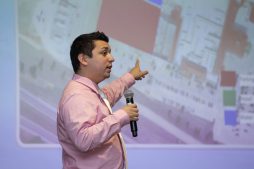 “It will make the casino more attractive to families and will round it out, so it will have something for people of all ages,” Hudson said. “It will be a significant investment, but it will pay off in the long run with the added business.”

The project showed them the breadth of CPN’s resources and employee talent as they collaborated with the Grand Casino and several other departments.

Given their family histories’ and a mutual interest in the health care industry, Brandon Jones and Maudie Loper chose to work with the Citizen Potawatomi Nation Health Services for their project.

They developed a plan to offer genetic testing to determine a CPN patient’s predisposition for breast cancer. Loper said their goal is “to grow a more educated group of young women who know what to look for and have the connections in place to access life-saving preventative care.”

The test they selected assesses the BRCA1 and 2 genes, regularly studied by doctors to determine a patient’s predisposition. Baylor University’s laboratory offered the best price for processing the samples at $999 per test. Jones and Loper found a grant to assist with program costs.

With the help of CPN’s Public Information Department, Jones and Loper created a questionnaire to mail to all 888 CPN women, ages 18 to 25 in Oklahoma. The short flyer included seven questions regarding family history and signs of potential complications. In their plan, CPN Health Services offered the screening to the first 100 respondents with the highest score.

“This issue felt very close to my heart because I have members in my immediate family who have battled with cancer, including a great-aunt who had breast cancer and passed away from it and another great-aunt who is currently battling breast cancer,” Jones said.

Cameron Kelly and Cade Miller created an interactive display about wildlife conservation as an addition to the Cultural Heritage Center. They wanted to educate Tribal members about a cause close to their hearts with cultural significance. Miller’s grandfather worked as an Oklahoma game warden for 25 years, and Kelly studies wildlife and biology.

“We believe that we, as humans, are not the top of a pyramid but part of a circle. Animals and wildlife are also part of the circle, and they are equal to us in importance,” she said.

The interactive separated the featured animals first by region — the Great Lakes, where the Tribe originated, and the Great Plains, where the U.S. government forced the Tribe during removal — and then by sections of “food” and “conservation.”

“The wildlife that we chose to focus on are bison, deer, rabbits, snakes, butterflies, the eagle, bears, turtles and birds,” Miller said. “The ones that are conservation-based were selected by their chance of being susceptible to disease, poisoning or other factors that could cause major population loss in each of those species. We selected the other wildlife because it played a major role in feeding our Nation and trading pelts for goods.” 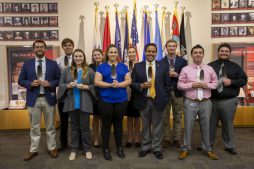 The content also included simple conservation efforts achievable by everyone, such as using copper as opposed to lead bullets while hunting to prevent eagles from getting lead poisoning. They also found grants to assist with the cost of a new interactive display — i.e., a large, touch-screen monitor.

Following the presentations, the PLP participants hosted a reception with snacks and drinks. Tribal Chairman John “Rocky” Barrett and Vice-Chairman Linda Capps gifted each student an eagle feather and a cedar storage box made by Red Arredondo to recognize the interns for their contribution to the Tribe. Then, Chairman led a feather blessing ceremony.

For some of them, the project turned working for the Nation into a career goal.