The Citizen Potawatomi Nation invites local youth interested in taking up North America’s original sport to attend the Lacrosse Exhibition Day on Oct. 14. The event will include a two-hour instructional seminar and feature two lacrosse games between teams from Oklahoma and Texas. CPN hopes to recruit players to restart the youth lacrosse program that will eventually compete against teams throughout Oklahoma. The event is free and open to the public.

Although lacrosse has Native origins, the program is looking for players of all ages and genders, whether Native American or not. The game’s genesis began with tribal people stretching as far south as the Gulf of Mexico to Canada in the north, but was most popular with those located east of the Mississippi River.

In the 17th century, St. Jean de Brebeuf became one of the first non-Native observers to record a game eventually known as lacrosse. De Brebeuf chronicled a game played by the Hurons to his church superiors. The Jesuit is said to have described the sticks used during the competition as resembling the “crosier” – or cross – carried by fellow clergymen in their sacramental duties. From there the name “lacrosse” became associated with the Native American pastime.

These early reports — including Englishman Jonathan Carver’s 18th century observations of Northeast tribes who played with balls slightly larger than those used in tennis — describe a game that could take place with a variety of field and squad sizes. Typically, two goals at opposite ends of a field served as boundaries, though that field could be up to a mile wide or larger. Team sizes also varied with ten to a dozen players taking part.

The Potawatomi played Pegnegewen (stickball), on mile-long fields with games lasting a few hours to an entire day. A single 15-foot goal post with a line drawn half way up stood at each end of the field. Players received one point for hitting the pole itself and two points if the ball struck a line painted on it. The Potawatomi players typically used a stick longer than two feet with a netted circle at the end. These were often made of steamed hickory shaped to hold the netting. Balls made from leather and hides were the focal points of the game, tossed from player to player at the goal posts to score. In some respects, Potawatomi pegnegewen resembled many of the techniques of modern day lacrosse.

“Games were played for recreation, communal prestige, spiritual reverence and healing,” he said.

Norton elaborated on the traditional Potawatomi words associated with the game, writing, “Exclusively for males, bagjegejek (players) are equipped with their own bagwzhanatek (ball stick) and divided amongst two even teams based on their moiety, shkesh (first-born) and kishko (second-born). Traditionally, each team was managed by and received guidance from a mshkekiwnene (medicine man), who would sing songs of strength and protection for his players.”

In the Potawatomi game, the first team to score 12 points with a pkwakwet (ball) won the contest.

East of the Mississippi River, three distinct versions of stickball emerged among other tribes. According to the late Thomas Vennum Jr., author of American Indian Lacrosse: Little Brother of War, each unique form emanated from the Southeastern tribes, the Great Lakes tribes and the Iroquois.

Vennum wrote, “Among Southeastern tribes (Cherokee, Choctaw, Chickasaw, Creek, Seminole, Yuchi and others), a double-stick version of the game is still practiced. A two-and-a half foot stick is held in each hand, and the soft, small deerskin ball is retrieved and cupped between them. Great Lakes players (Ojibwe, Menominee, Potawatomi, Sauk, Fox, Miami, Winnebago, Santee Dakota and others) used a single three-foot stick. It terminates in a round, closed pocket about three to four inches in diameter, scarcely larger than the ball, which was usually made of wood, charred and scraped to shape. The Northeast stick, found among Iroquoian and New England tribes, is the progenitor of all present-day sticks, both in box as well as field lacrosse.”

By the mid-1800s, the sport was the leading pastime of Canada. English speaking citizens of Montreal formed the first club, establishing rules and bylaws, including set boundaries much more limited than the once expansive mile-long Native American versions. 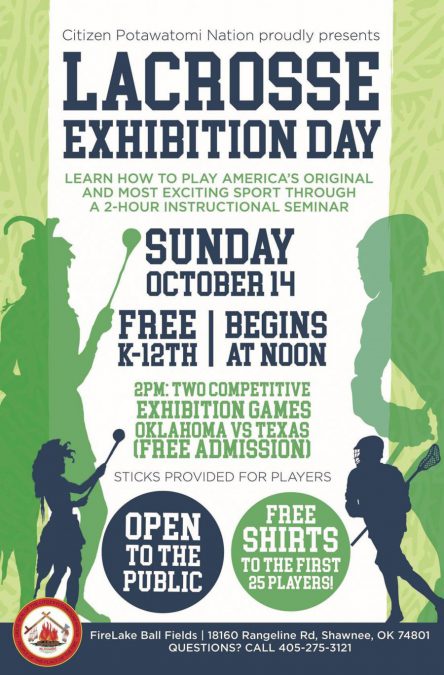 The game spread in the country and along the northern and eastern states of the U.S., while different versions emerged in places like Indian Territory, where tribes from across the continent were forcibly removed.

In places like Oklahoma, the games brought from the varied ancestral homes mixed as tribal people interacted. Seminoles, Creeks and Choctaws from the Southeastern U.S. brought their two-stick version of the game to the areas where they lived, while the single stick version of Sauk, Fox and Potawatomi were brought south from
the Great Lakes.

The Oct. 14 exhibition is an attempt to restart a successful CPN-sponsored program for youth in Pottawatomie County, regardless of whether the players are tribal members or not. Brad Peltier, a CPN employee and lacrosse coach, is helping spearhead the event.

“There are a lot of athletes out there whose skill sets don’t match up with more popular American games like football and basketball, but lacrosse might be a good fit,” Peltier said. “CPN has fielded competitive teams before and with the support of our local communities in Pottawatomie County, we want to develop one again for those students who may not have found their sport yet.”

The exhibition will take place at the FireLake Lacrosse Field, located at the FireLake Ballfields complex at 18160 Rangeline Road, Shawnee, Oklahoma 74801. Starting at noon, StickStar coaches will give interested students from grades K-12 demonstrations and instructions on how to play. Sticks and equipment will be provided for those new to the game, and both boys and girls are encouraged to play. Then at 2pm, two exhibition games between teams from Oklahoma and Texas will take place.