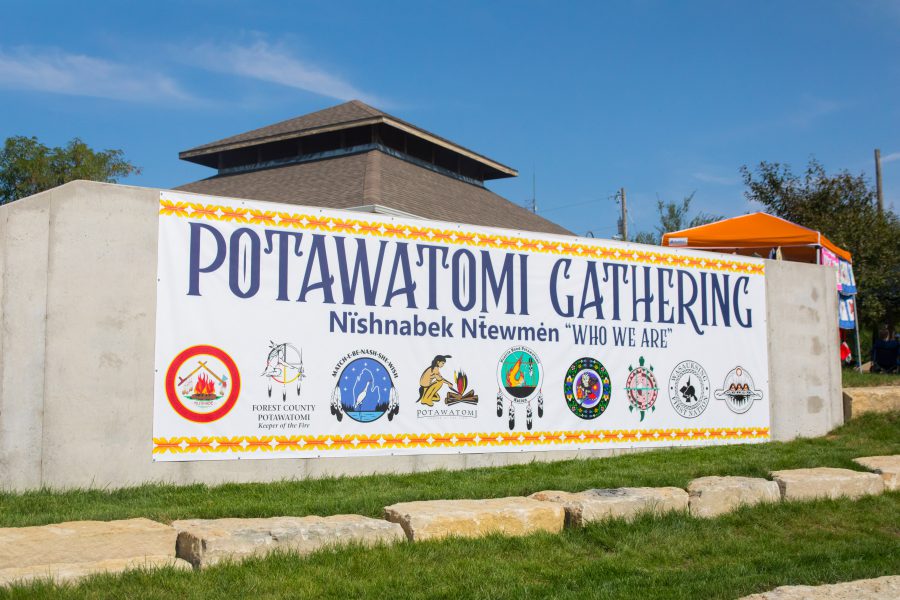 The 2018 Potawatomi Gathering, held July 30 through Aug. 5 at the Prairie Band Potawatomi Nation in Mayetta, Kansas, brought more than 2,300 Potawatomi together from across North America to celebrate Nishnabe culture, heritage and traditions.

This year marked the 25th Gathering, titled Nishnabek Ntewmen (Who We Are). Festivities began on July 30-31, with the Potawatomi language conference held at the Prairie Band Casino & Resort.

District 6 Legislator Rande Payne attended the tours and said he is thankful for all he experienced.

“I think it’s good to not only learn about our history, but I think we owe it to ourselves and the generations to come to tell that story — share what we’ve learned,” Payne told the Hownikan. “I’m very grateful for that learning experience.”

The day began with a stop at the Potawatomi Baptist Mission located at the Kansas Historical Society. The mission operated for 13 years and served as a school for many Potawatomi children. However, the loss of federal funding due to the Civil War caused the mission’s closure.

Once finished at the Baptist Mission, the group headed to Burnett’s Mound, which is the highest point in Topeka. The mound’s namesake, the notable Potawatomi Chief Abraham (Abram) Burnett, served as one of the interpreters on the Trail of Death.

After arriving in Kansas, Burnett farmed land near the mound and ran a profitable livestock business.

The tour then stopped at Uniontown, which served as the Potawatomi Indian Trading post along the California and Oregon Trails. A cholera outbreak in 1849 killed many in the community, and a tall cottonwood tree marks a mass grave of 22 to 35 Potawatomi who lost their lives to the disease.

“Uniontown probably hit me the hardest,” Payne said. “This was a significant piece of American history that hasn’t been, and isn’t being — and if we don’t do something — won’t be told.

“I think we’re in a space and time in American history where … we can put that information out there,” he said.

After removal west of the Mississippi, “not only did our ancestors figure out how to survive, in a very short period of time, they propped up businesses. They charged settlers to get them across the river,” Payne said.

The tours culminated at the Indian Pay Station & Museum located at St. Marys, Kansas, where the 1862 Potawatomi Census book is on display.

The sights “were encouraging,” Payne said. “When you think about what our ancestors had to endure, it makes the things that we have to endure now seem like a piece of cake.”

Boursaw said planning and leading the tours, “was probably one of the most satisfying days I’ve ever had.”

“It’s exciting and overwhelming – there are so many people, and I didn’t realize we had so many family,” said CPN member Keely Longo. She told the Hownikan she drove four days from her home in New Hampshire to attend her first Gathering.

Gathering provides a chance to learn traditional Potawatomi arts and crafts and meet other Potawatomi.

That evening, the Prairie Potawatomi Park officially kicked off Gathering 2018 with a powwow.

“I really enjoy the dance arena and just visiting with all of our CPN members,” said CPN member Donna Barnard. She began attending Gathering nearly 20 years ago and looks forward to the event every year.

On Saturday, Aug. 4, two traditional powwows served as a chance to honor female veterans and close this year’s event. During the final powwow, CPN member Laura Hewuse received the best of show award for this year’s art competition.

During the Friday evening powwow, CPN member Erin Locke represented the Nation in the Potawatomi Princess competition. Locke is a descendant of Abram Burnett and studies at Purdue University in Indiana.

“I was so incredibly honored to be able to represent the Citizen Potawatomi Nation this year in the Miss Potawatomi Princess pageant,” Locke said. “I take pride in and cherish my heritage. Being able to express my pride in front of everyone this past week was phenomenal.”

She said the overwhelming support of Tribal members made her feel comfortable and confident.

“I could hear many other CPN members cheering me on and yelling my name from the stands during the dance competition portion of the pageant,” Locke said. “I met so many wonderful people while I was at the Gathering, and I had a fantastic time comphttp://wasauksing.ca/eting with all the other young women.”