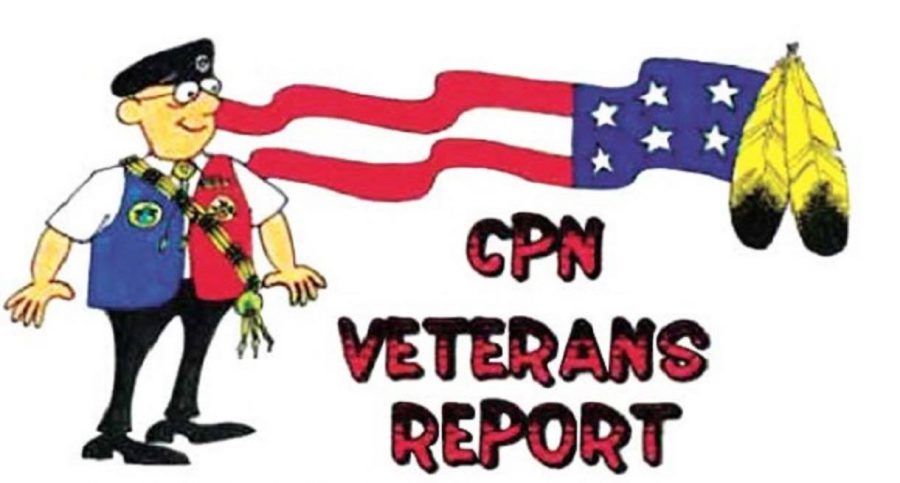 Another CPN Family Reunion Festival has come and gone. The CPN Veterans Organization passed out our red veterans’ ribbons again, and that’s the best way to advertise you are a veteran and proud of it. More and more people are approaching veterans and saying, “Thank you for your service.”

The CPN Veterans Organization did a demonstration of the folding of the American flag again this year, and it was well attended. We show how to properly fold the flag and explain the meaning of each of the 13 folds. For those of you who missed it, I have included the guidelines from the Destroyer Escort Historical Museum here:

Fold 2: A symbol of our belief in eternal life.

Fold 3: Made in honor and remembrance of the veterans departing our ranks who gave a portion of their lives for the defense of our country to attain peace throughout the world.

Fold 4: Represents our weaker nature, for as American citizens trusting in God, it is to Him we turn in times of peace as well as in time of war for His divine guidance.

Fold 5: A tribute to our country, for in the words of Stephen Decatur, “Our Country, in dealing with other countries, may she always be right; but it is still our country, right or wrong.”

Fold 6: For where our hearts lie. It is with our heart that we pledge allegiance to the flag of the United States of America, and to the republic for which it stands, one nation under God, indivisible, with liberty and justice for all.

Fold 7: A tribute to our armed forces, for it is through the armed forces that we protect our country and our flag against all her enemies, whether they be found within or without the boundaries of our republic.

Fold 8: A tribute to the one who entered into the Valley of the Shadow of Death, that we might see light of day.

Fold 9: A tribute to womanhood and mothers. For it has been through their faith, their love, loyalty and devotion that the character of the men and women who have made this country great has been molded.

Fold 10: A tribute to the father, for he, too, has given his sons and daughters for defense of our country since they were first born.

Fold 11: Represents the lower portion of the seal of King David and King Solomon and glorifies in the Hebrews’ eyes, the God of Abraham, Isaac and Jacob.

Fold 12: Represents an emblem of eternity, and glorifies, in the Christians’ eyes, God the Father, the Son and the Holy Spirit.

Fold 13: The stars are uppermost reminding us of our nation’s motto, “In God We Trust.”

Remember, the CPN Veterans Organization meets the fourth Tuesday of every month at 6 p.m. (or as soon as you can get there) in the North Reunion Hall on the Potawatomi powwow grounds. All CPN and spouse veterans and their families are welcome. A meal is provided.