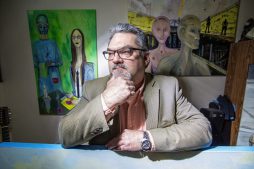 After the balloons touched down, many of the pilots from this year’s FireLake Fireflight Balloon Festival left with physical mementos of their participation thanks to one Tribal member. Charles Clark, who goes by his Citizen Potawatomi name, Kiktode, wore two hats during the event. In addition to organizing the festival’s art show, Clark spent months preceding the event painting more than 30 rocks with images of the featured hot air balloons later given as gifts.

Kelley Francen, the Tribal leasing and tax coordinator and one of the festival organizers, approached Clark about the project.

“I thought it was important for two reasons,” said Francen. “First, he’s an artist that could accomplish this large of a project, but it was also important to have a Citizen Potawatomi artist take on the task.”

“Rule number one; don’t sift through rocks in your dress clothes,” said Clark with a laugh.

He sought rocks that were approximately five and a half inches long with the goal of a four and a half inch tall image from the top of the balloon to the bottom of the basket.

“The most challenging part of the process was finding the best rocks,” he said. “They are not smooth — most are pitted and rough — but in the end, it added to the final product.” 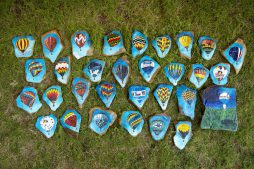 Using the photographs of the featured balloons that Francen sent him, Clark painted their images on the rocks using acrylic paint. He estimated he spent nearly 120 hours from April to late July on the entire project, including selecting the rocks and cleaning them — an average of about three hours per painting.

Though he declined to specify which one was his favorite, the CPN member admitted he picked one after completing almost all of the balloon paintings.

“I felt that the 30 balloons needed a reference point on the ground to complement them, so I chose the Citizen Potawatomi Nation’s FireLake water tower,” said Clark.

“The Nation has been good to me for the last 17 years, and I thought it appropriate to give a little something back to them. I know how important the balloon festival is to them, and any help I can give to add to the event I was certainly going to do it.”

Many of the rock paintings traveled out of the area since the festivals end, taken as gifts to the hot air balloon pilots. A group of artists in the Shawnee paint rocks and hide them around the community as a sort of scavenger hunt, and Clark said some of his future projects might be found there.

To learn more about the art of Charles Clark, please visit www.kiktode.com.