John Jr. and Pete’s families helped get the Tribe established in Oklahoma and were some of the first Potawatomi to settle on the new lands.

BEAUBIEN
Jean Baptiste Beaubien, circa 1780 of Detroit, Michigan, was one of the earliest residents of Chicago. He became a well-known fur trader after learning the business from his prominent fur-trading family and an apprenticeship with William Baily across the Great Lakes region. Most records indicate Jean Baptiste married five times.

In his first marriage, to an Ottawa girl, he had one child, Marie. He then remarried a second time to a Potawatomi woman and sister of Chief Shabbona, Mah Nah Bun No Quah. They had two sons, Charles Henry and Madore Benjamin. Both sons married Potawatomi women.

Jean Baptiste’s third wife, Josette Laframboise was half Potawatomi and the daughter of Frances Laframboise. Records show Jean and Josette had 12 Potawatomi children together. Jean bore four children with his fourth wife, Catherine Pinney, and eventually married a fifth and final time to Elizabeth Anthony.

They lived prosperously with their growing family of 13 children until the forced removal of Indians from Illinois by the federal government. They were removed west of the Mississippi River, and the government paid $1 an acre for Joseph Laframboise’s valuable land.

BERTRAND
Joseph Bertrand Sr. was born Oct. 8, 1778, on Mackinac Island, Michigan. The American Fur Company employed him, and he made his way to the St. Joseph River valley in 1803. There he married Madeline Bourassa — daughter of Daniel Bourassa and an unnamed Potawatomi woman circa 1781 — near the portage landing of the St. Joseph River.

To Madeline Bertrand, wife of Joseph Bertrand, a Potawatomi woman, one section of land at the Parc aux Vaches, on the north side of the river St. Joseph.

To Joseph Bertrand, junior, Benjamin Bertrand, Laurent Bertrand, Theresa Bertrand, and Amable Bertrand, children of the said Madeline Bertrand, each one half of a section of land at the portage of the Kankakee River.

They had six children: Catherine, Peter, Ozette, Antoine Sr., Washington and Francis Jr. According to the 1832 Treaty of Camp Tippecanoe, Catherine, Francois, their son Washington and granddaughter Mawteno (Francois Jr.’s daughter) each received contiguous sections of land adjacent to the north bend of the Kankakee River near Soldiers Village, Illinois.

In 1836, the federal government removed Francois, Catherine and family to the Platte country west of the Mississippi, along with most of the Potawatomi of the Prairie and the Kankakee.

Madeline received a grant of land near Paw Paw, Illinois, in 1823. That same year, Joseph paid $10 for a license to run an inn and tavern at his house. Joseph and Madeline also organized the First Methodist Church in Peoria, Illinois in 1824 and helped to build the town’s first school in 1826. With the help of their friend John Dixon, Joseph Ogee opened a successful ferry crossing Rock River near present-day Dixon, Illinois.

The Potawatomi of Kansas, known now as Citizen Potawatomi, left to settle land in Indian Territory. In spring of 1871, George, Elizabeth and their children were one of seven families first to arrive at their allotments located in the new reservation known as Pleasant Prairie in present-day southern Pottawatomie County. Shortly after, an educational institution known as The George Pettifer Day School was established approximately 3 miles northwest of Asher, Oklahoma.

TOUPIN
Mary Margaret (Mack) McWinnery, a full-blood Potawatomi, was born in 1844 in Michigan. She was orphaned at a young age, and a non-Indian couple named McWinnery adopted her. Mary traveled to Kansas to study at St. Mary’s, where she eventually met Amable Toupin, a French-Canadian who looked to make a fortune on the early American frontier.

Amable joined a wagon train heading for California but fell ill in the small prairie town of St. Mary’s, Kansas. A sister at the local convent nursed him back to health, and it was here that he connected with Mary Margaret. They married four years after meeting and had eight children together: Mary Margaret Toupin Trousdale, Paul Toupin, Adele Toupin Bowles, Alexander Toupin, Simon Toupin, Theresa Toupin Tierney, Magdeline Toupin Chilson and Amanda Toupin Martell Neddeau.

WANO
The Potawatomi family name Wano originated in the 19th century and stemmed from the elusive Chief Edward Shipshewana. The name Shipshewana, sometimes pronounced Ship-she-wah-no, means Vision of a Lion or Wild Panther at Large. He was the son of the Potawatomi Chief Pam-mon-ke-duck, which translates to Wandering Boy. Edward Shipshewana began a legacy for the Wano family that spread through Indiana, Kansas and eventually Oklahoma. 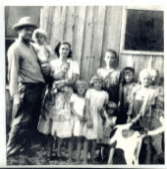 Madeline and Jean’s son James B. Yott and 10 out of his 11 children received allotments in Oklahoma through the 1887 Dawes Act. James B. Yott’s sister, Madeline Yott, married Narcisse Mathias Juneau. Narcisse’s father, Solomon, founded Milwaukee, Wisconsin, in 1818. Madeline received an allotment in Oklahoma but Narcisse did not.