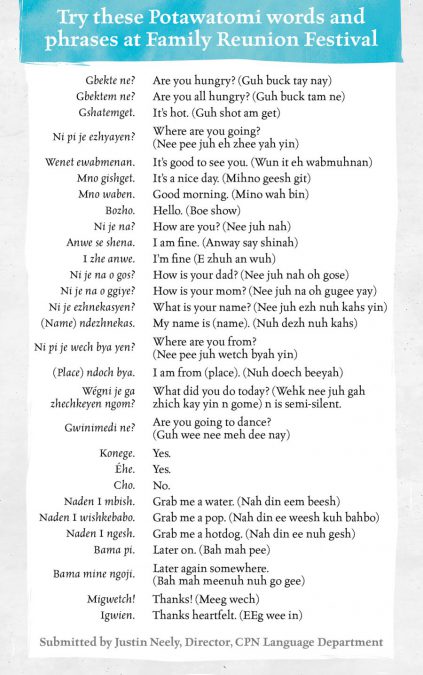 It’s been a very busy month for the language department. By the time this reaches you, we will have reached our 800th person to use the Moodle online Potawatomi language course. If you haven’t tried it out, go to language.potawatomi.org.

There is a Beginner I with 20 chapters. Beginner II has 20 chapters, and an Intermediate course has seven chapters. Each chapter has, on average, 13 lessons inside of it. Each chapter starts with a short prayer, which builds with each chapter and ends with a cultural teaching video. The cultural teaching videos explain things like why the eagle is important, Potawatomi cosmology, Potawatomi taboos, Potawatomi recipes, Medicine Wheel teachings and the Trail of Death, to name just a few. Scattered throughout the course are quizzes, tests, a glossary of terms, silly movie spoofs in Potawatomi and games like Tetris and a word search to help cement the concepts in your mind.

We have also developed a course on Memrise. You can get to the course at memrise.com. You can also download the app and search for the course “Potawatomi phrases.” This course has 12 levels and allows you to listen to recordings of lots of different speakers of Potawatomi. It has a leaderboard so you can compete with others, which is a lot of fun. We are also working on a new one called Potawatomi Language, “A day in your life,” which we hope will be done and active by the time this edition reaches you. This one will have levels based on things like morning routine, school, work, evening time at home and nighttime routine. Another source we have for folks that would like the more traditional classroom setting, but perhaps live too far away from the Tribe, is Facebook live. We are about halfway through our eight-week on-site class. All of our on-site classes we stream live on Facebook in the group Potawatomi Language. We also post a lot of language videos, books and words for folks in this group. Still more tools we have available include a dictionary with 7,600 Potawatomi words and 10,400 English words at potawatomi.org under language. We also have a children’s page, which is a town that kids can click on different buildings then choose between two rooms. In the rooms, if they click in different spots, it will open different types of videos. Some learning videos, some songs, some cultural videos, some movie spoofs and also some just silly videos. All of these videos are also now on YouTube. Just look up Potawatomi children or my name Justin Neely to find them, or go to cpn.news/youthvids.

Current projects include a new Citizen Potawatomi Nation Youth Choir for kids 6-18. We had tryouts in early May. This choir will learn and sing songs in the Potawatomi language. They will be learning a variety of songs, such as religious songs like “Amazing Grace,” traditional songs like the morning song, modern songs and Christmas songs. We will be meeting once to twice a month at the Cultural Heritage Center. We will send CDs home with the kids so they can work on the songs independently if they want. We hope to do some performances at a variety of events such as Family Reunion Festival, Festival church service, compete in the OU Language Fair for a trophy, winter storytelling event in February, Christmas program, as well as caroling. If your kids are interested and didn’t make it to the tryouts, please contact us, and we will see if we can set up a time and see about getting them in the Citizen Potawatomi Nation Youth Choir.

We are also currently working on a 15-part kids’ show, which is being funded by an Endangered Language Fund Grant from Yale University. The show will center on a group of friends who build a treehouse. The animals will all be called their Potawatomi names. Throughout the show, Potawatomi language will be used and added in the hope of getting young people interested and learning the language. We will follow the friends on a series of misadventures, from searching for Bigfoot to a big flood. We are developing the storylines now and hope to start knocking out the videos real soon.

For Festival this year, we will have a kids’ class, a couple of games of bingo and an adult class or two. Check out the schedule and listen for any updates from the grounds throughout the weekend. If you have never been to one of our bingo games, you are certainly missing out, and the kids always have a good time at the children’s course. Randy Schlachtun and Enedina Banks do a great a great job with the kids.

Some other projects include archiving and transcribing audio and video recordings. If you or your family have any old recordings of family members speaking the language, even if it’s on an old format, we would love to get a chance to digitize and preserve it for you and future generations.

We are also finishing out our first full year of offering the language in Oklahoma school districts. Because it’s an online course, we are able to offer it anywhere in Oklahoma. But it does require a little bit of groundwork for a new location. Currently, we are teaching the language at Wanette and next year have plans in the works to begin teaching in Tecumseh.

In order to teach in your district, it requires the school to have a computer lab or iPads for kids to use with internet access. It also requires the district to have a teacher of record in the room with the kids so that have someone to make sure they are on the course. It also requires a little paperwork with the state. If your district is interested, please get ahold of me at the language department ASAP. Sorry to say, for those of you out of state, it would be up to your state department of education to allow the course. This would be on a state-by-state basis. So far, we have not tried to do this. Since there are only three people in the language department, we are trying to grow gradually with this process so as not to overwhelm us.